Original title: The movie “Escape Room 2” was bleak at the mainland box office, once it was 150 million US dollars, it is no longer brilliant

On April 2, 2022, “Escape Room 2” was officially released in mainland theaters. Recently, “Escape Room 2” announced that the theaters in mainland China will be extended to June 1. Affected by the epidemic, the film was postponed from its original planned release on April 17, 2020 to May, and then to January 2021. Finally, it has undergone several file changes and will be released abroad in July 2021. After going through twists and turns and finally facing the public, “Escape 2” can be said to have suffocated the audience’s appetite. However, the appetite was suffocating, and the ending was like eating three bowls of white rice on an empty stomach – it was tasteless.

For mainland film and television in recent years, horror thrillers and escape room themes have been highly sought after by the public. In 2019, “Escape Room” reaped a surprising return on a production cost of just $9 million, grossing $155 million worldwide, providing enough production costs for the sequel. However, the global box office of the sequel is only 1/3 of that of the first film. Since the release of the film, the total box office is only 45.8 million yuan. Although the impact of the epidemic is an important factor that cannot be ignored, it is also an objective fact that word of mouth suffers from Waterloo.

It is worth noting that the reason for the heated discussion of this film is not the plot, but the differences in the discussion of the content. The reason is that the content of the theatrical version and the streaming media version are completely different. The theatrical version of the film begins with a connection to the plot of the first game. Zoe (Taylor Russell), the survivor of the first game, is receiving treatment from a psychiatrist, and the psychiatrist has a relationship with the psychiatrist around Minos and the shadow of the plane. The conversation did not make her overcome the psychological barrier, so she decided to go to the Minos headquarters; the content of the streaming version is completely different, the film begins with the man who designed the secret room for Minos under great pressure and his family background, The mysterious man used a series of unimaginable operations such as suffocating his wife in the secret room of the sauna and imprisoning his strange daughter, which paved the way for the next plot. After the foreshadowing was over, the plots of the two versions began to move towards the same direction.

The second part of the film is basically not much different from the first. In order to get rid of the shadow, Zoe and another survivor Ben (Logan Miller) embark on the road to find the mastermind behind the scenes. The new Chosen One has opened the escape room again. It can be seen that the director put a lot of thought into the design of the second level. Compared with the first one, the investment is larger and more complicated, and it also feels more deliberate and boring. The first level is Subway Horror. At the expense of a teammate, you successfully break out of the electrified subway and enter the second level. The second level is the laser array in the bank. With minor injuries, all the crew escaped; the third stage was a desert trap, which suffered a heavy loss compared to the first two stages. A lot of time was delayed due to disagreements within the team. Ben and a teammate were swallowed in quicksand, and their lives and deaths were unknown; The four levels thought they had successfully escaped, but what was waiting for them was the “baptism” of acid rain. After this level, all teammates died in the level, and only Zoe survived.

The escape of the protagonist finally put down the hanging heart of the audience. Although it is a pity to sacrifice a lot of teammates, the ups and downs of the plot finally gave the audience a chance to breathe. However, the next plot trend is different. are two distinct versions.

Zoe, who survived in the theatrical version, met Amanda (Deborah Anwar), who she thought fell to her death in the first plot. Amanda designed this new set because her daughter was coerced by Minos. The secret room, and begged Zoe to become Minos’ next secret room designer. After being rejected by Zoe, the male protagonist Ben, who was trapped in the next room, began to pour water into the cage. In the end, Amanda, who found her conscience, rescued Ben together with Zoe, and managed to escape again and called the police. At the end of the film, Zoe successfully overcomes the psychological shadow and gets on the plane home with Ben. On the plane, she meets the psychiatrist at the beginning of the film, echoing from beginning to end. At the same time, the aircraft secret room carefully prepared for Zoe was officially opened. The film ends here, leaving suspense for the next one.

The streaming version also echoes the beginning of the film, Henry in the sauna, his imprisoned daughter. After escaping from the secret room, Zoe fell into the place where the imprisoned designer daughter Claire was. At Claire’s plea, Zoe helped her escape from the room where she had been imprisoned for many years. Henry was completely shattered. The two who thought they had no hope were shot and wounded by the security guard who suddenly turned against the water, which reversed the situation. In the end, Claire kept Minos and his party in the secret room, and got revenge.

Evaluation of two outcomes that are consistent

It is not difficult to see that because of the excellent results achieved in the first part, the director invested a lot of money and effort in the second part. However, word of mouth declined sharply, and the Douban score was only 6.9 points. “Escape Room 2”, which already had a good foundation, received unanimous negative reviews from the audience. Nowadays, films of this type are rapidly rising in China. The film does not seem to seize such an opportunity. Although it can be classified as a victim of the film industry affected by the epidemic, the essential reason is because of the content. The sameness, the deliberately portrayed character relationships, the lack of innovation and the boring and compact plot, although there are two completely different beginnings and endings, they all make the audience feel extremely disappointed and boring. I hope the third part can get back the feeling of the first part and bring a brand new experience to the audience. 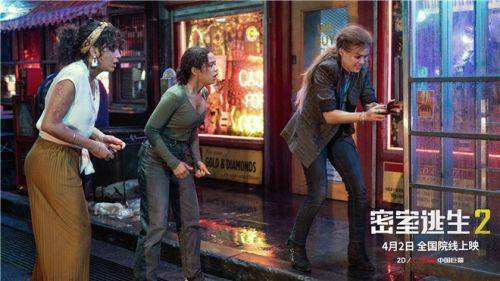