Recently, the movie “Railway Heroes” was released nationwide. The film tells the story of the “railway guerrillas” in southern Shandong fighting against the enemy and winning the final victory during the War of Resistance Against Japanese Aggression. On the occasion of celebrating the centenary of the founding of the party, the release of such a movie that writes about heroes and expresses the feelings of family and country comes at the right time. 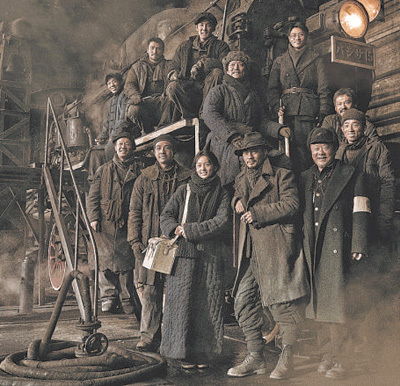 The picture shows a still from the movie “Railway Heroes”.

This touching and resonant work is prominently embodied in the three “news”.

One is the new expression of mainstream values ​​in images. In recent years, some thematic films have achieved good results, realizing the unity of social and economic benefits. The main reason is that its theme firmly grasps the audience’s high recognition of patriotism, heroism, collectivism, and family and country feelings, and contains the mainstream values ​​rooted in the excellent traditional Chinese culture, revolutionary culture, and advanced socialist culture. Innovative expressions and unique aesthetic presentations have won the recognition of a wide range of audiences. In terms of innovative expressions, the movie “Railway Heroes” started with railway workers such as Hong (Zhang Hanyu), the elder of the railway mechanic workshop, and Lao Wang (Fan Wei), the station dispatcher. Their inner world and rich emotions can be seen from a small perspective, showing the ideals and beliefs common to an ordinary group when their homeland is in danger, demonstrating their patriotic spirit of fighting foreign enemies and defending the mountains and rivers, which is awe-inspiring. The personal choices and value orientations of the protagonists Lao Hong and Lao Wang under the conditions of extreme disparity between the forces of the enemy and ourselves, and the extremely cruel struggle, show the efforts and sacrifices made by the revolutionary martyrs for national liberation and the happiness of the people, and concretely embodies the ideals and pursuits of the Communists. , So that the image expression of the main melody has a strong contemporary character.

The second is a new perspective of typified narrative. Adapting a classic film is a good choice of subject matter, but it is more difficult to present it well. Regarding the heroic deeds of the Lunan Railway Brigade belonging to the 115th Division of the Eighth Route Army, there have been works of art such as the novel “Railway Guerillas” and the classic movie “Railway Guerillas” released in the 1950s. How to tell the story in a new way and from a new perspective is a difficult problem for the creative team. Based on a large number of research and historical materials, the main creative team adapted from small cuts and adopted the genre film narrative paradigm to enable the audience to obtain a new aesthetic experience. In terms of plot layout, the movie “Heroes of the Railway” not only follows the classic story model of suspense superimposed action, but also pursues diversified plot combinations to make the whole story novel and complete. In terms of character creation, Lao Hong is the image of a tough guy, and Lao Wang is the image of forbearance, strong and soft, and complement each other. In terms of humanity exploration, both the old Wang’s nervousness when facing the enemy’s interrogation, but also the gradual awakening of young workers and nurses’ sense of resistance, the performance is more profound. “Heroes of the Railway” is based on the complete and wonderful story, and interprets the truth of history with the truth of art.

The third is the new presentation of industrialized aesthetics. While choosing a good theme and telling a good story, a comprehensive use of video systems in multiple audiovisual languages, industrialization and production that embody industrial aesthetics, ensure the viewing and viewability of the film, and provide a better audiovisual experience. It is the main theme of the work. It’s the key to being popular again. The movie “Heroes of the Railroad” has two close-up dynamic close-ups of steam locomotive wheels, a panoramic view of railway stations, a glimpse of the environment of the machine repair factory and various appliances, all creating an environmental atmosphere with an industrial texture. The heavy snow from the beginning to the end of the film, and the gray and white dark tones build a depressive image visual system, effectively creating a suspenseful atmosphere. In terms of service and Huadao, we strive to finely restore various scenes involving character activities, such as shanty towns, home furnishings, daily utensils, etc., which are all available, true and clear. The precision of the details also includes the delicacy of emotions. The party entrance ceremony in the train car fully demonstrated the nobility and glory of being a Communist Party member and pushed emotions to a climax. The vividness of the details of a movie reflects the continuous dedication and respect of the main creative team for the art of film. It is also the creator’s unremitting efforts and pursuit for the high-quality development of Chinese movies. “Heroes of the Railway” leaves viewers in this respect. A more profound impression.

A novelist once said: “The ultimate test of whether a novel is successful is whether it can arouse our empathy.” The same is true for a movie. The movie “Heroes of the Railway” has aroused empathy among the audience, and many of the plots are very moving and tearful. It is hoped that through this film, more audiences, especially young audiences, can gain insights into this glorious history of the railway guerrillas, remember the heroic deeds of the revolutionary ancestors, cherish today’s hard-won peaceful life, and gain ideological enlightenment and spiritual strength from it.

Aopu Optoelectronics: is planning to acquire 67.78% of Changguang Aerospace’s shares and will be suspended from November 26_ 东方 Fortune.com