At the beginning, Le Willis was the title of the debut work by the twenty-six year old Giacomo Puccini, written to participate in a competition organized by the publisher Sonzogno but not even taken into consideration there; but then presented, in 1884, at the Dal Verme in Milan with resounding success, and Italianized with the title Le Villi, based on input by Giulio Ricordi. Who did not think twice about putting Puccini, the true heir of the already elderly Verdi, under contract.

Defined as a “Legend” in that first version, to underline the inspiration that the disheveled librettist Ferdinando Fontana had drawn from ancient Germanic sagas (the villi are the souls of girls who died for treason, who take their revenge by making the cheating men dance until they die) , was brought from a deed to two at the request of Ricordi himself; and Puccini, to further satisfy him and in anticipation of the first at La Scala in 1885, added solo pieces for the two protagonists, including the well-known romance of the tenor “Torna ai happy days”.

But traces of that first version were immediately lost: of the dismembered score, partly at the Morgan Library and Museum in New York and partly at the Ricordi Archive, the musicologist Martin Deasy however created, between 2019 and 2020 , a critical edition published by Ricordi.

Le Willis for the first time in Italy

This edition allowed the creation of a recording (so-called Opera Rara) and, in these first days of June, the representation of Le Willis in a live show, for the first time in Italy after the Milanese debut in 1884: first at the Paganini Auditorium in Parma, the inaugural title of the Toscanini Festival, and then at the Teatro del Giglio in Lucca, the birthplace of Puccini. Important double opportunity to get to know Le Willis, which in their first, very rare version, reveal not only Puccini’s talent in refined orchestral writing, in the multifaceted and continuous symphonic breath, but also an already evident sense of theater, essential, pressing, incisive . 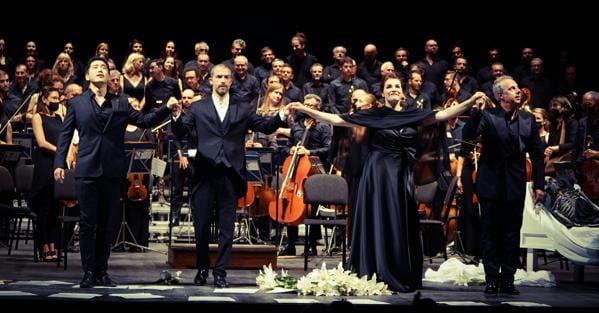 The show at the Giglio di Lucca

In Lucca, the artistic choice of placing all the performers on the stage had to deal with the narrow spaces of the Giglio: a sense of crowding and some obstacles in the stage movements were inevitable. Moreover, it was not a real show, since Filippo Ferraresi creates a less than semi-scenic form, made up of few means and few, cryptic ideas, more decorative than anything else: it twirls incessantly on itself, like a whirling dervish, the good Silvia Layla; women-villagers parade, dressed in the clothes of today’s everyday life, bringing on stage painted images of saints and martyrs, signs that make up palindrome words. Perhaps the symbol of today’s women victims of betrayal, as is Anna, the protagonist, betrayed by her Roberto. Fortunately, there is a musical part rendered marvelously by Omer Meir Wellber, with his close and vigorous conducting, which involves the Toscanini Philharmonic and the voices of the Camerata Musicale di Parma with excellent results. Selene Zanetti is an Anna with an intense voice, a participant interpreter without being honeyed; Kang Wang outlines Roberto with confidence, gradually gaining momentum, and Vladir Stoyanov gives Guglielmo Gulf an authority nourished by profession. And in the end, the Giglio audience enthusiastically greets these Willis who deserved to be rediscovered.

Poor concentration and abdominal pain: this is the Long Covid of children