Home Entertainment There is no big brother in Tangshan, there is only a big murderer (Photos) Girl | Video |
Entertainment

There is no big brother in Tangshan, there is only a big murderer (Photos) Girl | Video |

[Watch China, June 14, 2022]Kung Fu star Bruce Lee’s famous work in the 1970s is called “Tangshan Big Brother”, which is about a young man from Middle Earth who works in Thailand and finds that his boss is a black and evil force , the story of finally being brave, punishing evil and promoting good. Tangshan here refers to “Datang Jiangshan”, which is a general reference to the homeland. The older generation of Chinese living overseas are accustomed to calling their homeland “Tangshan”. Big Brother Tangshan also refers to the Chinese big brother who came forward.
See Chinese websites prohibit the establishment of mirror websites. Return to the genuine Chinese website.

Times may indeed be different. History has made a big joke today. The real Tangshan does not have a big brother, only a big murderer. There was a big earthquake before, and then there were scumbags. The story here is not bravery, but horrific. If Bruce Lee was still alive, he probably wouldn’t have the face to shoot “Tangshan Big Brother 2” again. He was as tough as him, and it was estimated that he could only shoot one “Blood at a BBQ Restaurant”.

I didn’t have the guts to watch that video of Tangshan, and I couldn’t help but fast-forward several times – but my daughter saw it, and the teenage girl was incredibly angry and couldn’t believe it. In the words of netizens, thousands of close contacts are done in a few hours, but a few beasts hunt them down overnight. For some things, it seems better for the CDC, which is good at epidemiology, to send a few big whites to do it?

Yes, I believe that all normal human beings may have doubts about this breakthrough in the evil of human nature: how did the beasts come into being in the human world? Why do beasts run amok?

Let me start by saying that some of the comments attribute this to the protection of women’s rights, which I don’t quite agree with. This kind of evil has nothing to do with gender – for bullying beasts, as long as they are weaker than them, they may become the target of trampling, but this time it happens to be women. They may have bullied the elderly and children or many ordinary people yesterday.

What really makes people feel sad is the bloody violence that took place in the downtown area. In the girl’s wailing, no one was a man. Although we have seen many scenes where this matter is not related to hanging up high, we still feel desperate every time. This kind of despair is especially sad compared to the five thousand years of civilization that we talk about every day.

I don’t mean to criticize the people present. Because human nature is a complex topic, if it is only attributed to regions or countries, then it is suspected of map guns, and it is not conducive to us to see the environmental causes behind the folk customs. If we put ourselves in our shoes and think about it, what can we do if we are also at the scene – if one person rushes forward, he may not be able to fight, and they will be sent to the hospital together; . After all, helping a fallen old man may lose his fortune, and defending his humiliated mother may also be sentenced to life imprisonment. These are all real-life cases from Yin Jian’s near future.

The reason why there are no good people in “Tangshan” is that the cost of being a good person is extremely high, so high that sometimes it is greater than doing bad things. Because from the law to the reality, nothing is enough to support you to be a “Big Brother Tangshan” with confidence. Someone joked before that if you can’t take a photographer with you to be a good person, then you have to bring at least a camera. Just like the jaw-dropping question of the century by the judge in the Peng Yu case: You didn’t do it, why did you help it? 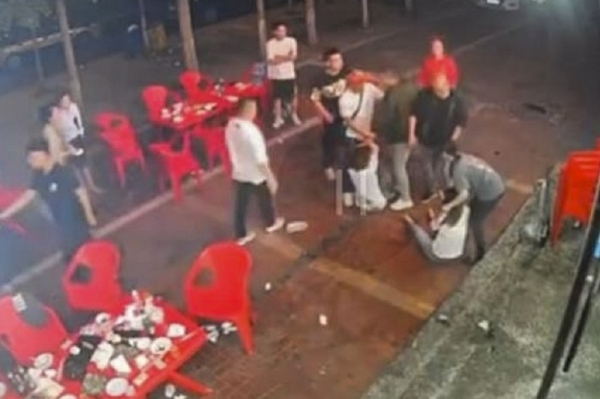 Because the survival resources of the lower-level society are more cramped than those of the upper-level society, in the competition for survival, morality and morality cannot help but be tested by the law of the jungle. Once someone breaks through the bottom line of human nature and fails to be punished or even benefits, a herd effect will soon form, leading to the collapse of the entire society. Of course, some eras don’t mind this kind of collapse, and even want this effect – it is a good thing to split the people into atoms that are powerless and have no concept of moral right and wrong.

The law as the norm of social behavior does not recognize morality or morality, but we have to look forward to morality or morality in our lives. These scumbags, such as those who beat people in Tangshan, exist in different places and times, and I believe that if things weren’t so fermenting, they would probably have ended in public security detention — just like the brazen report in the Beijing Youth Daily , “attack”, “conflict”, “confrontation”, and then fined three drinks as drunken trouble.

I have no doubt at all that this case, which has provoked public anger and has no complicated background, will soon be closed, and the punishment may be as severe as everyone wants. But I don’t doubt that in an era of increasing hostility, such a tragedy is far from over. For small fish and shrimps, our anger may be useful, but in an environment that fosters more and more evil deeds, it is actually just a powerless onlooker full of anger, and in the end even we ourselves will feel hopeless and numb.

A few years ago, the official Weibo of a certain group said, “Going out late at night to have a skewer? I’m sorry, the United States can’t give you such a sense of security”, saying that “the way of life you are accustomed to in China may become a life-threatening charm in the United States.” . Now that I am in the United States, I did go for a string by myself in the middle of the night. Unfortunately, the so-called “life reminder” was seen in distant Tangshan. A reader asked me to talk about my views on the frequent shootings in the United States, and I can say it now – if the girls in Tangshan can also put a gun in their bags, even if it is only small-caliber self-defense equipment, I think maybe the contrast of strength and weakness will change in an instant. In 2016, Chen Fengzhu, a Fujian immigrant who runs an aquatic product store in Gwinnett County, Georgia, United States, was robbed by three gangsters at night with guns. Chen Fengzhu, who had only practiced shooting once, faced the crisis without saying a word. The gun was fired, one of the gangsters was killed instantly, and the two fled. After the incident, Chen Fengzhu not only had no responsibility, but also received praise from the police and society.

Yes, sometimes in the face of unforgivable evil, I prefer Chen Fengzhu’s response. Who is who’s “death reminder” is not in strength, but in the environment.

(The article is reproduced with permission from Tank Man Facebook page)

(The article only represents the author’s personal position and opinion)

[角色] Series 3-5 have been remastered and made available on Xbox+ Windows! Game pass is also supported!

Infectious disease expert: What you should know about the new monkeypox outbreak – IT and Health – cnBeta.COM