Home Entertainment Wang Leehom’s brokerage company accused Li Jinglei of being too imaginative and exposed the true identities of the three men.
Entertainment

Wang Leehom’s brokerage company accused Li Jinglei of being too imaginative and exposed the true identities of the three men.

Original title: Wang Leehom’s agency accused Li Jinglei of being too imaginative and exposed the real identities of the three men 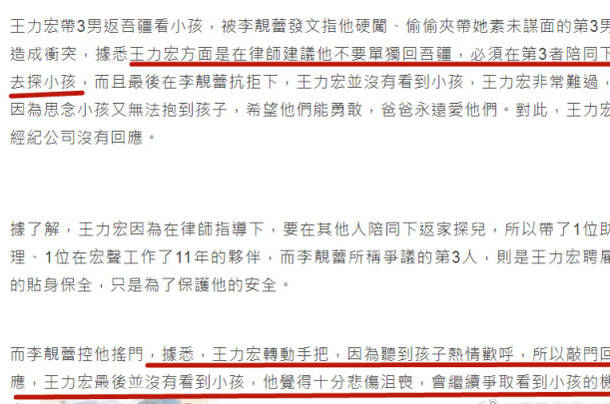 Sohu Entertainment News In the early morning of January 12, after Li Jinglei posted another long post, Wang Leehom’s agency responded: “Beside Wujiang (Wang Leehom’s house) is the police/police/bureau. She has too much imagination. If it is true as Ms. Li said, should she be Just call the police.” As for the identities of the three men, “the other staff are the life assistants who have served the couple for 12 years and the employees who have been on the job for 11 years, and the third is the security guard.”

The summary response is:

1. She is too imaginative. There is a police station next to her home. Shouldn’t she call the police?

2, 3 male identity, is the life assistant who has taken care of them for 12 years;

3. For Wang Leehom who did not see the child, the agent said that Leehom Wang was very sad and his father will always love them.

Previously, Li Jinglei sent a long article to Wang Leehom again. In the long article, Li Lianglei said that Wang Leehom brought three unfamiliar men and wanted to break into the house with the keys when she refused. Defrauding their sympathy and using them to spread false news to rehabilitate himself; claiming that Wang Leehom tried to let the child go downstairs to face the media, and arbitrarily passed the content of the video call with the child to unrelated people, exposing the appearance and privacy of the child ; Li Jinglei denied asking Wang Leehom for money, saying that she only asked for proper arrangements for the child’s physical and mental health and the quality of life should not change, and never asked for any more money. In addition, Li Jinglei said that she did not receive any information from by2 studio in the private letter, and she would definitely cooperate with the police investigation and provide evidence.

To sum up the general content as follows: 1. Wang Leehom tried to bring three men into the door, and the staff with criminal records and underworld relationships met with Li Jinglei, and told the public that Li might commit suicide; 2. Spread rumors about relatives and friends, expose the appearance and privacy of the child, and put the child’s appearance and privacy. Drag into the whirlpool; 3. Li Lianglei who spread rumors took the opportunity to ask for money, etc. Return to Sohu, see more

here are the causes and remedies

Announcement on Resolutions of the Seventh (Provisional) Meeting of the Seventh Board of Directors of Wuhan Fangu Electronic Technology Co., Ltd. Wang Lili_Sina Finance_Sina.com

A stamp to remember Giovanni Verga

Kim Jae Hwan, NCT Do Young and others...

In the musical Harlem of Summer of Soul

Up for auction are Fellini’s drawings that tell...

The 2022 Spring Festival drama will start the...

“Little Hudun Big Hero” will be released on...

Spotify is clearing its music after Neil Young...

The strong taste of the new year is...