The opening concert of the Harbin Symphony Orchestra music season. 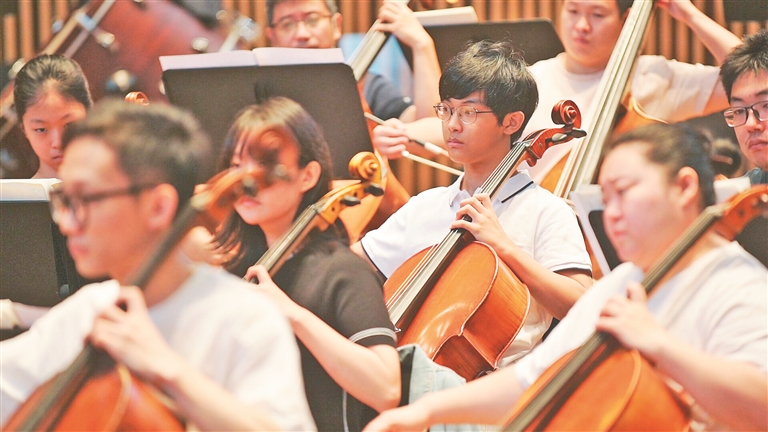 Xia Shangzhou in rehearsal with the Harbin Symphony Orchestra.

Music genes are surging in the blood of the city, nourishing the young people of Xia, Shang and Zhou dynasties

They are the back waves, representing the infinite possibilities of Music City in the future

When you walk through the streets of Harbin, measure and recognize the city with your footsteps, you will be pleasantly surprised by the musical symbols that can be seen everywhere: the city has a century-old symphony orchestra, and has the longest national music festival in China.” Harbin Summer Concert”, the fusion of music and urban life, highlights the cultural background of the only “music capital” in Asia.

When the lanterns first came on, the opening concert of the Harbin Symphony Orchestra music season was being staged. In the Harbin Concert Hall, Xiao Chen, a tourist from a different place, was new to the city and still didn’t know everything about the city. She took this place as the first stop to open the city’s adventures.” This auditory feast, helmed by the famous conductor Tang Muhai, is worthy of my attention,” she told reporters with great interest.

The 14-year-old cellist Xia Shangzhou is also looking forward to the concert. When the “Afternoon Prelude of the Faun” sounded, on the stage, among the professional performers, this energetic face was still a little immature. in the color movement.

Last year, he just emerged in the 11th Tchaikovsky Youth Music Competition China Preliminary Competition and was shortlisted for the top three in the cello group. Being able to participate in high-level music performances with many outstanding seniors, stage experience, and master guidance have enabled him to gain self-confidence on the road to pursuing his dreams.

Xia Shangzhou studied piano at the age of 5. At the age of 7, he met the enlightenment teacher and cellist Quartz at the Harbin Children’s Palace, and opened the “evolution” history of Xia Shangzhou’s growth: at the age of 9, he was recruited as a member of the Harbin Grand Theater Children’s Chorus , participated in “Turandot” and “Blanc Poems” performed by the Italian Genoa Opera Troupe and Sicilian Choir, sharing the stage with world-class top theaters and masters; at the age of 10, he became a member of the Chenlong Zhumeng Music Engineering Master Class. Dialogue with world-renowned cellist Wang Jian to share his insights into the art of cello; later, he became fascinated with composition, and his musical works are full of “brain-opening” imagination, like riding a steed of ideas Running wildly on the ground.

Passed down from generation to generation, talents came out in large numbers. Fu Gengchen, Li Shuangjiang, Jin Tielin, Guo Song, Liu Xijin… In the Chinese music scene, Harbin musicians are an important force, and generations of musical talents have moved from the “music capital” to the whole country and become famous all over the world. In the Harbin Music Museum, in front of a music celebrity wall that walked out of the black land, everyone standing here will express their sincere emotion: “There are so many musicians who have deep feelings and indissoluble bonds with Harbin.”

The development of dazzling diamonds requires polishing and quenching, and it needs stage bearing to set off. In August this year, Harbin Concert Hall launched a series of concerts for the “Rush, Back Wave” youth art exhibition. Xia Shangzhou joined the incubation plan of this young artist. On August 14, his cello recital was held in Harbin Concert Hall. .

They are the last wave, a vigorous force waiting to be bloomed, representing the infinite possibilities of the “Music City” in the future.

Help future musicians, shape sustainable career paths for them, and inject high-quality and fresh artistic power into the construction of “music capital”. Xia Shangzhou and his partners became the first beneficiaries and performed “eighteen martial arts” in the performance of “Rush, Back Wave”.

Inheriting the cultural tradition of Music City is Xue Suri’s new mission, and it is the direction he is still working towards after he left for half his life and returns.

“Music has colors, and different timbres can express different emotions, light and dark, cold and warm, firm and soft. Music can not only be heard, but also seen and even touched.”

See also  Meng Jia responded to the controversy over stage styling, saying that she would seriously consider styling and lose weight._Question_Netizen_Tanjian

Attending Xue Suli’s master class is like experiencing an art appreciation class. His unique metaphors make the atmosphere of the class lively and interesting. This outstanding violinist and music educator in today’s international music scene always has a sincere heart for music education.

On August 23, Xue Suri returned to his alma mater, Heilongjiang Art Vocational College, and “inquired about the pulse” for young teacher Zhou Mo face to face.

At the age of 17, he was admitted to the instrumental music major of the Heilongjiang Provincial Art School (that is, Heilongjiang Art Vocational College), and served as the principal of the school’s orchestra.

When Xue Suli reviewed his artistic path, he always remembered the influence of Harbin’s music and cultural traditions on him. “Harbin is the cradle of my musical dream. I started learning the violin when I was 6 years old. At that time, my father was the deputy principal of the symphony orchestra at the Harbin Opera House, and my mother was an actor in the dance team of the Heilongjiang Provincial Song and Dance Theatre. I spent a lot of my childhood in the theatre. I spent it in the rehearsal hall, the auditorium, and the backstage of the stage.” Xue Suli recalled.

See also  Jilin coach: young players have problems with mentality, Guangzhou is sure of key moments

Xue Suri said with deep feeling that in recent years, Harbin has been making continuous efforts to improve both “soft and hard”, and a series of landmark buildings and hardware facilities such as Harbin Concert Hall, Harbin Grand Theater, Harbin Conservatory of Music, Harbin Music Museum have been completed. With use, the value of the international cultural brand of “Music City” continues to increase. Music has gradually become an important channel to display the diverse charm of Harbin and convey the urban temperament.

Inheriting the cultural tradition of Music City is Xue Suli’s new mission, and it is the direction he is still working towards after he left for half his life and returns.

“Life without music is incomplete, and every child should receive adequate music aesthetic education at the growing stage. Most piano children will not embark on a professional path, but after systematic music learning, from a small point of view, they will Become a consumer group of classical music in the City of Philharmonic; in general terms, it will become the cornerstone of urban cultural development.” Xue Suli hopes to set an example and lead more children to fall in love with music.

What kind of wonderful chemistry happens when a city is connected to music? A series of unique “square” concerts set off a wave of upsurge in the streets and alleys of Harbin.

Under the Harbin Flood Control Memorial Tower, in the waiting hall of the North Square of Harbin Railway Station, and on the streets of Central Street, Xue Suli and the piano boys played “My Motherland and Me” and “Usuli Boat Song” together. Street notes, melody everywhere. In the flash mob performances, citizens and tourists sang softly to the beat and danced together. People deeply felt the artistic concentration of the City of Philharmonic and experienced the unique charm of Harbin’s summer. The endless music echoed in the city. over the sky.

The Catholic Culture Podcast: 144 – The Obedience...