Rome (NEV), June 14, 2022 – Over a hundred people attended the inauguration of “Flamingo Loophole”, the new therapeutic climbing gym that was opened last weekend, Saturday 11 and Sunday 12 June in Bihać, in Bosnia, from Mediterranean Hope, migrant and refugee program of the Federation of Evangelical Churches in Italy. Girls and children, but also many young people, coming from the Canton of Una-Sana, the region on the north-eastern border with Croatia, have tried their hand at climbing, experimenting, some for the first time or not, this discipline. 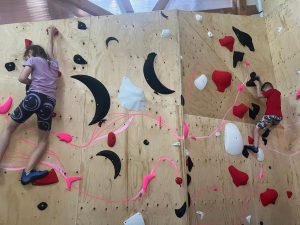 “The idea – he explained Niccolò Parigini, referent of Mediterranean Hope in Bosnia – arises from the fact that climbing has an enormous social value: it is no coincidence that it is a sport also recommended as a support for people with post-traumatic stress syndrome, with anxiety and depression problems, because yes works on the relationship of trust with other people and on their own abilities, also to enter into relationships with others. And it is at the same time an individual activity but which is done in a group: that is, it serves to establish connections, to foster inclusion and, what we hope, a model of spontaneous integration “.

The climbing gym is accessible free of charge, courses for children and adolescents will be activated in the coming weeks, as well as lessons for adults.

The target, that is the public to which the initiative is addressed, is primarily the local population. “Working here we realized that, especially for young people, there is a lack of meeting places and alternatives for free time, in a situation that is not easy, however, with high levels of unemployment and services not always capable of responding to people’s needs. Hence the project linked to physical activity and this type of sport specifically ”, adds Parigini. 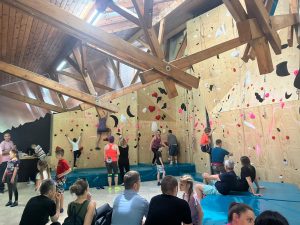 “In every place we work – he declared Marta Bernardini, coordinator of Mediterranean Hope – we try to understand the territory and work together with the realities that already work for the rights of people, migrants and non-migrants. Improving society, “from below”, means creating the foundations for building a welcoming network, a greater awareness even towards those who are “foreigners”, a place to live and share their spaces. As evangelical churches we are committed, from Rosarno to Lampedusa, to Scicli and the humanitarian corridors, to improve the conditions not only of migrants but also of the populations who meet them, and above all of the young people who live in these border areas. At the same time we would like to create, with the day counter and the climbing gym, a meeting place that is a lasting resource for the town of Bihac and the neighboring towns in the Una Sana region, a project that is managed and used by those who every day lives this territory crossed by many people who try to get to Europe and build a better future “.

See also  From academic issues to public opinion topics: What is Trump's "critical racial theory"? | United States | Al Jazeera
The project, with a gym of about 200 square meters with equipped walls of about 100 square meters, was carried out by Mediterranean Hope, a program of the Italian Protestant churches, together with the local sports association Spektrum, and is mainly financed by the Otto per mille of the Waldensian and Methodist Churches.
“We also want to thank the companies and organizations that have already spent their time to help us, giving us the materials useful for this sport, and all the equipment that users will use, free of charge”, finally underlines Parigini. The artist and climber also worked on the project Francesco Bertelèresponsible for the technical design of the climbing gym, and the operator of Mediterranean Hope Lea Karam.

Mediterranean Hope has been operating in Bosnia since the beginning of 2021: in addition to the climbing gym, with a daytime counter for migrants, where people in transit can take a shower, wash their clothes and receive new clothes, drink hot tea. From January 2022 to June 2022, the center welcomed 1,232 people.

Castelfranco, clean air in schools: here is the pilot project against smog and Covid

Win11 is attracting gamers, and the killer feature...