Lazy bag! How to backup LINE chat history on iPhone?Pay attention to these 2 things before changing the machine | 3C Life | Digital

For reference to those who are planning to change planes recently

With the launch of Apple iPhone The new phones of the 13 series have brought about a wave of phone replacement. But before replacing the phone, have you backed up all the data in your old phone?I’m going to share with you today, how to backup LINE Chat history, as well as the small details that you can pay attention to before changing the phone after the backup is complete, this time mainly for iOS The user will demonstrate how to backup, let’s take a quick look

1. Are there any updates to the iOS operating system and LINE?

Before backing up, you can check whether the LINE on your phone has been updated to the latest 11.15.0 version, and what is the current iOS version. It is recommended to update iOS to iOS 14 or higher, so that the backup instruction mentioned later will be applicable.

2. Is the iCloud space sufficient?

When you want to back up the chat history of LINE on your iPhone, the system will back up the data to the iCloud cloud space. Before backing up, you can check to see if your iCloud space is enough to store the chat history and data of LINE, or you can refer to the previous The size of the file after the backup, so as to avoid insufficient space in the middle of the backup

Also, don’t forget to check the stability of Wi-Fi. In order not to fail the backup, it’s also important to make sure that your phone is connected to Wi-Fi with a stable signal.

Fourth, confirm that the phone is fully charged

The next step is to check whether the phone’s power is sufficient. It is recommended that you charge your phone first and then back up.

The last point is very related to the replacement of the phone. Before replacing the phone, don’t forget to confirm whether the phone number and mailbox have been set for the LINE account. You can log in again after switching to the new phone.

Then you can enter the link of backing up chat history, first click “Settings” in the upper right corner of the LINE homepage, and select “Chat”

Then click “Backup Chat History” >> “Back Up Now”, and the system will back up your chat history for you. Here you can pay attention to the “Last Backup Time”. If there is a refresh, the backup will be considered successful. Then if you encounter a “backup failure” situation, you can check whether it is caused by insufficient storage space, not connected to a stable Wi-Fi, insufficient battery power, or too much space occupied by LINE in the mobile phone. , Find out the factors that may cause it, and try to back it up again! 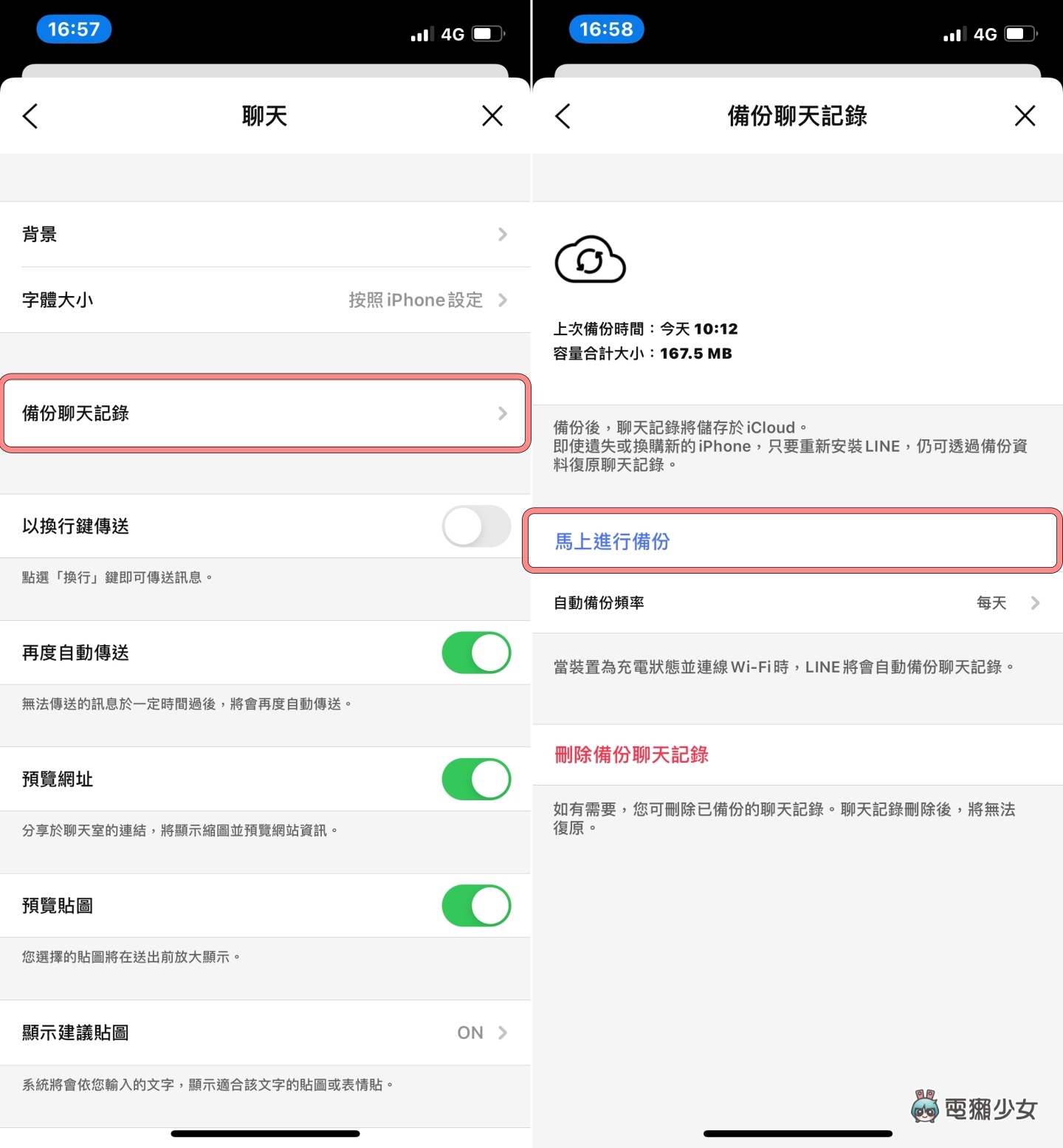 In addition, LINE actually has a built-in automatic backup function. On the page of “Backup Chat History” just now, click “Auto Backup Frequency”. After you click in, you can turn on automatic backup, and you can choose to “Daily “”, “Every three days”, “Weekly”, “Every two weeks”, and “Monthly” to automatically back up. After you select it, the system will automatically back up your chat history to iCloud on

When you back up your chat history and prepare to change your phone, remember to go to “Settings” >> “Mobile Account Settings”, and turn on the mobile account settings to move the account to the new phone.

Finally, before changing the phone, remind everyone to remember to check whether “Letter Sealing” in LINE is turned off, go to “Settings” >> “Privacy Settings”, and then manually turn “Letter Sealing” off.

Simply put, this is a point-to-point encryption function that can protect user privacy and ensure that the text messages and location information you send are protected. Originally, LINE will enable this function by default. If you did not turn it off before changing the phone, it is possible that when you switch to a new phone, all the messages that have been backed up will also be encrypted, and the backed up information will not be visible. Q_Q

The above are a few tips on backing up LINE for iOS users. If you are a person who cares about chat history, you may wish to back up the data in your phone before changing your phone, so that when you switch to a new phone, you can also get important information. Follow the transfer together

“The original text was published in the cooperative media Electric Otter Girl, and the United News Network was authorized to reprint it. 》

Apple Apple released the first generation of Apple Watch in 2015. It was a shocking bomb in the 3C market that year. However, because Apple routinely included products that have been sold for more than 5 years but less than 7 years on the “obsolete list”, the first generation of Apple Watch It has recently been included in the list of obsolete products.

Lazy bag! How to backup LINE chat history on iPhone?Pay attention to these 2 things before changing planes

With the launch of the new iPhone 13 series by Apple, there has been a wave of phone replacements. But before the replacement, have you backed up all the data in your old phone?Today I’m going to share with you how to backup LINE’s chat history, as well as the small details that you can pay attention to before changing the phone after the backup is completed. This time, it is mainly for iOS users to demonstrate how to back up. Let’s take a quick look.

Why don’t you buy wireless Bluetooth headsets to “free the pain of being knotted”?Netizens rejected 3 reasons

Bluetooth headsets are one of the most popular products nowadays. In addition to endurance, consumers are more concerned about the quality of sound. However, unlike the storage problem of wired headsets, Bluetooth headsets are also prone to “lost” dilemma. In response to this, a female netizen asked on the Internet “Are anyone still using wired headsets?” aroused heated discussion.

After announcing the release of the Android 12 AOSP version, Google subsequently confirmed that it will hold the Pixel autumn launch event at 10 a.m. West Coast time in the U.S. (1 a.m., October 20, Taiwan time). It is expected that the design will be confirmed before the announcement. Pixel 6 and Pixel 6 Pro.

Windows 11 is open for free download and update, there are 3 ways to upgrade

A few days ago, the specific details of Windows 11 were announced, and after the subsequent announcement of the Surface series models equipped with Windows 11, Microsoft officially opened up to download the official version of Windows 11 for PC models that meet the upgrade.

See also  The first chapter of "Legend of Dawn" begins to experience the plot, and the trial version will be available next week | 4Gamers
0 comment
0
FacebookTwitterEmail
previous post

Kidneys, how to protect them from diseases and new treatments

“It will simplify the handling of Covid-19 suspected...

What happens to our health if we drink...

Updated news from Liguria on Primocanale.it

what it consists of and what to eat

the weekly diet with what to eat!

Sampdoria, morning in sight of Atalanta: therapies for...

How many “very dangerous” masks are still around?...