Home Health Sileri: “Green pass away with the end of the pandemic. The quarantine for the vaccinated? It must be reduced immediately and then eliminated “
Health

Sileri: “Green pass away with the end of the pandemic. The quarantine for the vaccinated? It must be reduced immediately and then eliminated “

“Demonstrating is always lawful and it is everyone’s right, but the motivation of disputes against the green pass I understand it a little less. I would like to explain to these people that he green pass, for how it was organized both in the vaccination part and in the diagnostic part with swabs, in reality it is an instrument of freedom“. Thus, to the microphones of “24 Morning” (Radio24) the Undersecretary of Health Pierpaolo Sileri comments on the street protests against the green certificate, adding: “It is thanks to the green pass that today Italy is doing better than many other Western countries, that until a few months ago we saw as a mirage in terms of vaccination percentages and contagion trends. Today Italy is an example in the world, because thanks to the green pass it holds the infections at an extremely low level“.

And he points out: “The green pass is not a passport that will last 10 years. It is obviously a temporary pass whose termination will depend not only on the number of vaccinated, but also on the circulation of the virus. Hence, the green pass will see an end when there is minimal circulation of the virus, that is, when the pandemic phase of the virus itself ends. Of course I don’t know how to give a precise date, because everything also depends on the countries around Italy and on the presence of any variants. I still believe that 2022 will truly be the complete year of the turning point. The night is already over, we are already at dawn. Indeed, we are with a sun that has already risen abundantly. The numbers tell us. In my opinion, the whole of 2021 and part of 2022 will pass to adjust the game ”.

See also  Sony's acquisition of Bluepoint Games has contributed to the remake or upgrade of many masterpieces-Hong Kong unwire.hk 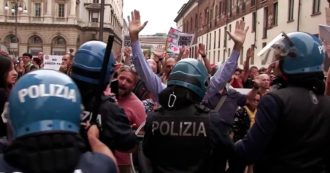 Milan, no green pass protesters try to reach Giorgia Meloni’s rally in the Duomo: tension with the police

Circa the elimination of the quarantine for the vaccinated, the undersecretary explains: “We will get there, it would be desirable and common sense, but we will remove it by passing through a further reduction. This is a moment of transition, that is, things are going very well but we are also attentive to other variations. So, let’s see what will happen in the coming weeks as infections after the reopening of schools, after which we can free the vaccinated from quarantines. It is not done immediately, because there is always the risk of variations. In addition – he concludes – vaccination is going very well in Italy, but it is not so all over the world. We will need to achieve a higher level of global vaccination, just to protect ourselves from possible variations. And then, at that point, it is clear that even the quarantines for the vaccinated will first have to be reduced immediately and will be eliminated at a later stage. Similarly, over time, the spacing and the mask will also have to be abandoned. Doing it today is premature, but it is desirable to do it quickly, compatibly with the circulation of the virus “.

Juric criticizes himself: “I could have done more, but with Venice it’s a point earned”

Flu vaccine: last call for those with a...

The Terminator is coming!Arnold Schwarzenegger will debut “World...

Covid vaccine for children. who decides if one...

Peer-to-peer, open source, bitcoin: at the origins of...

Poinsettias Ail are back, to help research against...