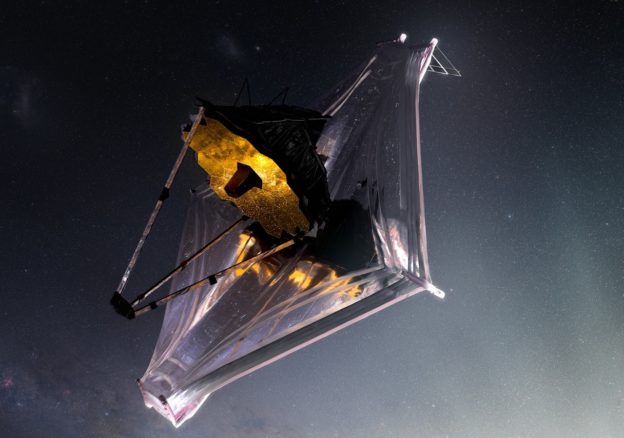 The Webb Space Telescope hasn’t been collecting data long before it has broken its own observational record. Recently, astronomers discovered a galaxy candidate CEERS-93316 from the first set of data from the Webb Telescope, which was formed only 250 million years after the Big Bang. If subsequent spectroscopic observations are confirmed, it will be the most distant galaxy known so far.

The Webb Space Telescope (JWST) began to send back the first set of scientific observation data last month, including the Mistral Nebula, Southern Ring Nebula, Stephen’s Quintet, etc., which were clearer than Hubble’s past images. A deep-field image of many galaxies far beyond what Hubble can see.

Recently, an astronomical team discovered a galaxy candidate CEERS-93316 from this set of data, bringing a new redshift record of z = 16.7, formed only 250 million years after the Big Bang.

While in principle the Webb Space Telescope could detect galaxies with redshifts greater than 20 and appearing less than 200 million years after the Big Bang, it is truly surprising that we were able to find such distant galaxies from the first set of data. However, the team also emphasized that in order to determine the redshift value, follow-up observations using spectroscopy are required, so CEERS-93316 is still called the most distant galaxy candidate. If it is confirmed to be a galaxy – then due to the expansion of the universe, it is currently far away from us. About 35 billion light years away.

Observing this galaxy will help scientists understand how and when the first galaxies in the universe formed. Objects with a redshift higher than 10 all existed within the first few hundred million years of the universe, but so far, the only confirmed galaxies in this range are GN-z11. Regardless of the outcome, CEERS-93316 may not hold the record for the farthest galaxy for long, and as the Webb telescope continues to peer into the universe, it will discover more and fainter galaxies and objects that will help us understand the early universe.

The new paper has not been peer-reviewed.

(Source of the first image: NASA)

Covid, Andreoni: “Quarantine reduction is not a great...