Home News 240 yuan for less than 50 kilometers? Jinan’s high taxi prices are complained about, the official response-IT and traffic-cnBeta.COM
News

240 yuan for less than 50 kilometers? Jinan’s high taxi prices are complained about, the official response-IT and traffic-cnBeta.COM

As a well-known “spring city”, Jinan attracted a large number of tourists during this year’s National Day Golden Week. However, when taking a taxi, some foreign tourists found that Jinan’s new energy taxis were more expensive, and they were charged 240 yuan for a distance of less than 50 kilometers. On the Internet, there are not a few complaints about the expensive taxis of Jinan’s new energy taxis. 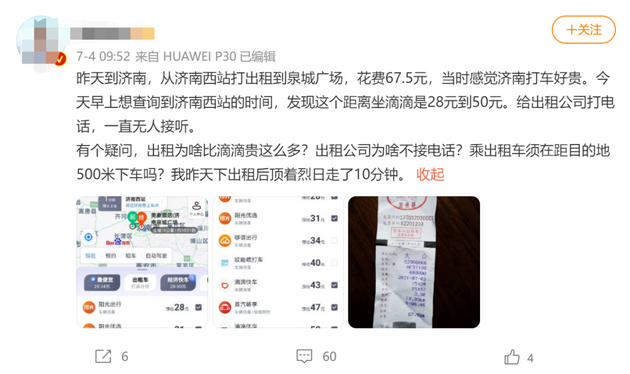 According to the Volkswagen Daily, on October 8, the relevant staff of the Jinan Development and Reform Commission’s Toll Management Office responded that they had conducted a new cost survey on new energy taxis in the early stage, and have now studied 4 sets of new billing and pricing schemes. , A symposium will be held in the near future to promote implementation.

According to Beiqing-Beijing Toutiao, on October 7, Ms. Fu from Jinan reported that she returned to her hometown in Jinan to visit relatives during the National Day and took a new energy taxi from Jinan Airport to Jinan West Railway Station, which was less than 50 kilometers away. , But was charged a taxi fare of 240 yuan, “I usually take a taxi this far and it is less than 100 yuan, but this time it cost 240 yuan, which is nearly three times the price, which is too outrageous.” Ms. Fu was puzzled. , Why the cost of the blue new energy taxi she took was so high, she even suspected that she had hit the black car.

According to the Qilu Evening News, on October 5, Ms. Qin who came to Jinan to visit relatives from other places also encountered the same situation.

“From the East Railway Station to the destination is 24 kilometers, almost the entire journey is elevated. My daughter told me that the taxi ride is only about 70. As a result, the half-hour journey to the place costs 112 yuan.”

Except that the fare is more expensive, Ms. Qin went home and restored the route with her daughter to find out that the driver did not take the fast and close elevated, but detoured northward.

“When I got in the car, the driver asked me if I was using the meter. I thought I was getting in an irregular taxi.” Ms. Qin said that she knew that blue new energy vehicles were expensive, so she wanted to take a green one. But when she left the station, the taxi waiting area of ​​the East Station was all blue new energy taxis, leaving her no other choice.

Netizen Xiaozhu, who has had the same experience, said that he took a new energy taxi from Jinan Airport to Jinan West Railway Station. Originally, he could reach the destination by ordinary taxi for less than 100 yuan, but this time it cost 223 yuan. “When I was in the car, I watched the number of the meter rising, just like my heart was dripping blood. I actually spent more than 200 yuan in the fare for less than 50 kilometers. I will never take Jinan again. New energy taxi.” Little Pig said. 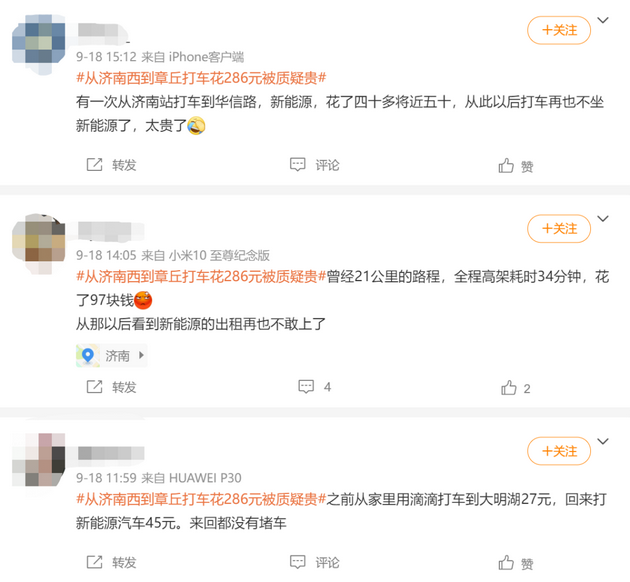 Prior to this, in October 2019, Jinan Development and Reform Commission and Jinan Transportation Bureau issued the “Notice on New Energy Patrol Taxi Tariffs and Other Related Matters in Our City”.

The notice shows that in order to further improve the tariff structure of cruising taxis in Jinan, actively guide the optimization of the energy structure of cruising taxis in Jinan, based on comprehensive consideration of the operating costs of new energy taxis, the income level of residents and drivers, etc., the study , The basic tariff standard for new energy patrol tourists transporting taxis is:

At the same time, the return fee of the new energy taxi in Jinan is charged according to the tiered billing method:

The part over 35 kilometers (excluding 35 kilometers) will be subject to an additional 125% vehicle-kilometer freight rate.

Why is the pricing of new energy taxis in Jinan so high?

According to the Beijing Youth Daily, on the 8th, a staff member of the Toll Management Office of Jinan Development and Reform Commission stated that the pricing of new energy taxis in Jinan was promulgated and implemented in 2019, taking into account the cost of car purchase and use at that time, “Jinan There are two types of new energy taxis in the city, one is pure electric vehicles, and the other is plug-in hybrid electric vehicles. Due to the lack of government subsidies for the purchase of new energy taxis in Jinan, the purchase price of the two types of vehicles is relatively high. The purchase price at that time was about 150,000 per unit and 200,000 per unit, and the pricing was made taking into account the relatively high cost of charging at that time, the maintenance of the vehicle, and the replacement of the battery.”

See also  In Canavese the lack of teachers and the Green pass: many uncertainties about the resumption of the school

This staff member admitted that the charging price of new energy taxis in Jinan is indeed too high, even higher than that of first-tier cities such as Beijing, Shanghai, Guangzhou, etc. Many citizens have reported this problem. The city leaders also attach great importance to this and are studying new ones. The pricing plan allows the pricing of new energy taxis to return to a rational range. “At present, we have conducted a new cost survey and have developed 4 sets of new billing and pricing plans, and are preparing to discuss and implement them. While reducing the fare, we must also consider the prospects of the rental industry. The income planning of many taxi drivers is within a reasonable range.”

According to the Qilu Evening News, the promotion of new energy taxis in Jinan began in 2018 with the “Jinan City Strengthening Pollution Source Prevention and Promoting the “Four Reductions and Four Increases” Three-year Action Plan (2018-2020)” issued by Jinan City in 2018. According to the work deployment of the action plan “promoting clean energy use in transportation”, Jinan must vigorously promote energy-saving and environmentally-friendly transportation vehicles such as new energy and natural gas. The proportion of energy vehicles or clean energy vehicles reaches 80%.

Since the end of 2018, Jinan has begun to replace new energy taxis one after another; on November 7, 2018, two electric taxis in Jinan were officially put into operation, marking the start of Jinan’s taxis in the new energy electric era. According to the staff of the Jinan Development and Reform Commission’s Toll Management Office, when they counted the number of taxis in the main urban area of ​​Jinan in April this year, new energy taxis accounted for more than half. Up to now, new energy taxis should have reached about 70%.

Free Guy, the video game movie that brings together 40 years as a nerd

A thousand places at risk between former Ceramics...