China and ASEAN establish a comprehensive strategic partnership American scholars: China is proving that it is “more reliable than the United States”|Strategic Partnership|ASEAN|US_Sina News

Original title: China and ASEAN establish comprehensive strategic partnerships American scholars: China is proving that it is “more reliable than the United States”

(Observer News) On the morning of November 22, Chinese leaders formally announced at the 30th anniversary summit of the China-ASEAN dialogue relationship that the “strategic partnership” between China and ASEAN was upgraded to a “comprehensive strategic partnership.” The leaders of ASEAN countries participating in the meeting gave positive comments on this.

“I believe that this will be a meaningful, substantial and mutually beneficial (relationship) upgrade,” Singapore’s Prime Minister Lee Hsien Loong welcomed the upgrade of China-ASEAN relations at the video summit, believing that this move means that the two sides will work in various fields. For deeper cooperation. Vietnamese Prime Minister Pham Myung Tseng also believes that the establishment of a comprehensive strategic partnership between China and ASEAN is a manifestation of the fruits of cooperation between the two sides over the past 30 years.

“Comprehensive” refers to areas of cooperation. The South China Morning Post in Hong Kong quoted the analysis of domestic scholars as saying that the cooperation between China and ASEAN previously focused more on economic affairs, and the cooperation can now be further extended to the security field. This immediately attracted the attention of American scholars. Kurantsk, a researcher at the American think tank, said that China’s promotion of relations with ASEAN is demonstrating itself as an economic partner “more reliable than the United States.”

At the same time, the media of ASEAN countries focused on China’s commitment to oppose hegemonism and provide development assistance to ASEAN. Singapore’s “Straits Times” also mentioned that despite the rise of protectionism internationally, China and ASEAN are still committed to promoting trade liberalization.

“This will be a meaningful, substantial and mutually beneficial upgrade”

The commemorative summit for the 30th anniversary of the establishment of dialogue relations between China and ASEAN was co-chaired by the Chinese leaders and the ASEAN chairmanship of Brunei Sultan Hassanal.

According to a report from Xinhua News Agency on November 22, the summit passed the “Joint Statement on the 30th Anniversary of the China-ASEAN Dialogue Relations”, and the relationship between China and ASEAN has also been upgraded from a “strategic partnership” to a “comprehensive strategic partnership.”

The leaders of ASEAN countries thanked China for hosting this summit and responded positively to the establishment of a comprehensive strategic partnership between China and ASEAN.

According to the National News Agency of Malaysia (Bernama), Malaysian Prime Minister Ismail emphasized at the meeting that a world order based on multilateralism is essential. “Such an order will make a civilization based on rules, open, inclusive and transparent sustainable. Peaceful coexistence”.

Ismail then expressed his appreciation for China’s call on developed countries to fulfill their climate obligations at the United Nations climate summit COP26 and provide developing countries with funding and technology to deal with climate change. He agreed with the Chinese side and called on all countries to continue their efforts to maintain the South China Sea as a “sea of ​​peace, stability and trade.” 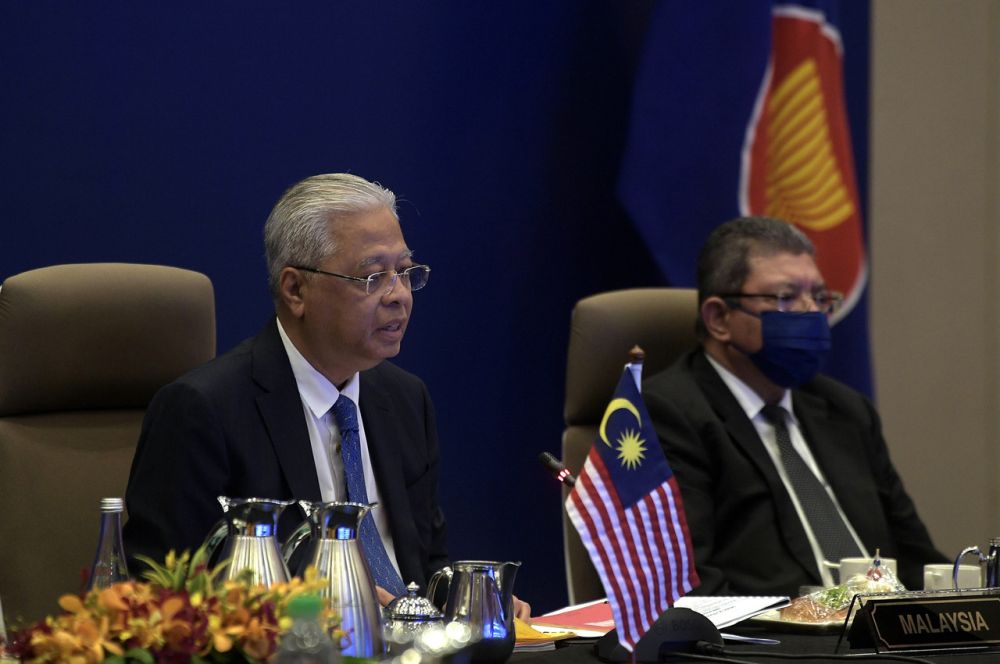 Thailand’s “Bangkok Post” reported that the spokesperson of the Thai government stated that the summit hosted by China involved discussions on regional and international issues and would set the tone for the future relationship between ASEAN and China in many aspects.

The spokesperson said that Thai Prime Minister Prayut discussed at the meeting how to build a safe, prosperous, sustainable and inclusive future through a people-oriented approach that “leave no one behind”. Thailand reiterated its role in working to overcome global challenges and promote international cooperation for sustainable development.

According to a report by the Vietnam News Agency, Vietnamese Prime Minister Fan Myung Tseng said that the upgrading of ASEAN-China relations is a manifestation of the achievements of cooperation between the two sides over the past 30 years. Vietnam will continue to do its utmost to help ASEAN-China relations develop to the level of a “comprehensive strategic partnership”.

Fan Mingzheng believes that ASEAN and China should continue to enhance strategic mutual trust, promote comprehensive cooperation, and continuously expand results to achieve higher goals and greater benefits for bilateral relations. He also expressed the hope that ASEAN and China will restore and promote economic, trade and investment ties as soon as possible.

“I believe that this will be a meaningful, substantial and mutually beneficial (relationship) escalation.” According to Singapore’s “Straits Times” report,Singapore’s Prime Minister Lee Hsien Loong welcomed the upgrading of relations between ASEAN and China, believing that this move means that the two sides will carry out deeper cooperation in various fields.

Lee Hsien Loong mentioned that despite the impact of the epidemic, the two sides continue to strengthen their partnership. He also emphasized that ASEAN and China should continue to work together for peace and stability in the region and focus on the development of trade between the two sides. 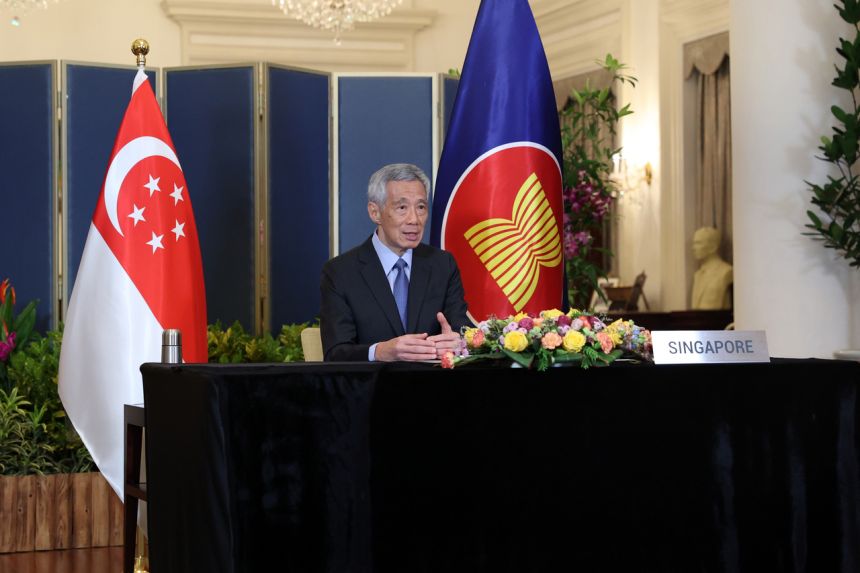 Singapore Prime Minister Lee Hsien Loong made a speech at the summit, pictured from The Straits Times

In addition to the leaders of the above-mentioned countries, the ASEAN chairmanship of Brunei Sultan Hassanal, Prime Minister Hun Sen of Cambodia, President Joko of Indonesia, President Thong Lun of Laos, President Duterte of the Philippines, and ASEAN Secretary-General Lin Yuhui also attended the summit. .

The leaders of the ASEAN countries stated that the formal establishment of a comprehensive strategic partnership between ASEAN and China is an important historical milestone in the relationship between the two parties. ASEAN is willing to work with China to strengthen all-round cooperation and welcome the 30 years of better relations between ASEAN and China. Make greater contributions to regional peace, stability and prosperity. I wish the Beijing Winter Olympics a complete success.

Aesthetician:China is proving to ASEAN that it is “more reliable than the United States”

Scholars of the Chinese Academy of Social Sciences have pointed out that “comprehensive” refers to the field of cooperation, including politics, economy, culture, and military. “Strategy” means a higher level of cooperation, which is consistent in terms of overall, overall, and core interests.

See also  China-ASEAN Economic and Trade Cooperation Forum to Commemorate the 30th Anniversary of the Establishment of Dialogue Relations|ASEAN|Guangxi|China_Sina Technology_Sina.com

The relationship between China and ASEAN has been upgraded from a “strategic partnership” to a “comprehensive strategic partnership”, which means that the two sides will cooperate in various aspects such as macro strategies, and the depth and breadth of their cooperation will be further improved on the original basis.

Hong Kong’s “South China Morning Post” reported on the 22nd that the previous cooperation between China and ASEAN focused more on economic affairs, but it can be expanded to other areas such as politics, security, navigation, and cultural exchanges through the upgrading of relations.

Xu Liping, a researcher at the Institute of Asia-Pacific and Global Strategy of the Chinese Academy of Social Sciences and an expert on Southeast Asian issues, said that currently, the United States sees the potential role of Southeast Asia in its growing influence on China. China contends”.

Not long ago, the United States joined the United Kingdom and Australia to establish a new Indo-Pacific security alliance “AUKUS”, which included helping Australia obtain nuclear-powered attack submarines. This move has already aroused concerns among Southeast Asian countries about the “arms race.” The Indonesian Foreign Minister expressed concern about this and urged Australia to commit to continuing to fulfill all nuclear non-proliferation obligations.

“For many years, the security cooperation between China and ASEAN has not been enough.” Chen Xiangmiao, an associate researcher at the National South China Sea Research Institute, told the South China Morning Post that China and ASEAN have not yet established a formal defense minister dialogue mechanism, and both sides can make efforts to this end.

Obviously, some American scholars have become wary of the escalation of China-ASEAN relations. According to a report by Al Jazeera on the 22nd, Josh Kurlantzick, a Southeast Asian researcher at the US think tank “Foreign Relations Committee”, has drawn Southeast Asian issues into Sino-U.S. relations after gesticulating the Burma and South China Sea issues.

“China has upgraded its relationship with ASEAN to a comprehensive strategic partnership, and would like to use this to vigorously promote one point, that is,’Unlike the United States, China is closely related to the ongoing economic integration in Southeast Asia.” Kurantsk claimed that China has promoted The relationship with ASEAN is showing itself as an economic partner “more reliable than the United States.”

In addition to American scholars, European and American media, which have always followed China’s various trends, quickly followed up. Among them, Reuters and CNN mentioned China’s commitment to “jointly building a peaceful homeland” in their reports.

See also  Sudan, among the Ethiopian displaced people from Tigray: "I fled because I didn't want them to rape my daughters"

At the video summit, Chinese leaders emphasized that China was, is, and will always be a good neighbor, good friend, and good partner of ASEAN. China resolutely opposes hegemonism and power politics, and is willing to live in friendship with neighboring countries for a long time and jointly maintain lasting peace in the region.

The Associated Press of Australia took note of China’s launch of the “China-ASEAN Healthy Shield” cooperation initiative and the “Building a Prosperous Home Together” commitment. It mentioned that China is willing to provide ASEAN with another US$1.5 billion in development assistance in the next three years. The country fights the epidemic and restores the economy.

But at the same time, the above-mentioned European and American media all mentioned in their reports that the Philippine supply ship recently trespassed in the waters near Ren’ai Reef in China’s Nansha Islands and took the opportunity to speculate on the South China Sea issue. The spokesperson of the Ministry of Foreign Affairs of China said in response to this earlier that the Chinese Coast Guard ship performs official duties in accordance with the law and safeguards China’s sovereignty and maritime order. At present, the sea area of ​​Ren’ai Reef is generally calm, and China and the Philippines are maintaining communication on this.

It is worth mentioning that the Malaysian Foreign Minister pointed out at the summit that although some ASEAN countries have disputes over the South China Sea issue, this should not be the issue that hinders the relations between China and the ten ASEAN countries.

Different from the European and American media, the media of ASEAN countries all spoke positively about the upgrading of relations between China and ASEAN.

Singapore’s Lianhe Zaobao and Indonesia’s Tribunnews noted that Chinese leaders mentioned that China should be a builder and guardian of regional peace, insist on dialogue and non-confrontation, partnering and non-alignment, and work together to deal with threats that undermine peace. Various negative factors.

Singapore’s “Straits Times” highlights the economic and trade cooperation between China and ASEAN countries. The report mentioned that due to the impact of the epidemic, protectionism and unilateral tradeism have risen internationally, but China and ASEAN are still promoting trade liberalization, including the signing of the Regional Comprehensive Economic Partnership (RCEP) .

On November 15 last year, after 8 years of negotiations, 15 RCEP members completed the signing. On November 2 this year, the ASEAN Secretariat, the depository of RCEP, issued a notice that after 6 ASEAN member states and 4 non-ASEAN member states completed the approval process, the threshold for the agreement to enter into force was reached. According to the agreement, RCEP will take effect for the ten countries mentioned above on January 1, 2022.

Call of Duty: Vanguard, our test

Cars blocked due to snow, the mayor of...

Bad weather, frost in Sardinia: snow even below...