With the spread of the delta strain and the stacking of autumn and winter factors, the risk of spreading the epidemic has increased. Since the outbreak of local epidemics in multiple locations on October 17, China has launched new crown vaccine booster immunizations for key populations, accelerating the construction of the entire population’s immune barrier.

In Beijing, the vaccination work in various districts is proceeding in an orderly manner. Among them, the Chaoyang District has been inoculated with more than 100,000 doses of intensified injections for 3 consecutive days. The work of vaccinating young people with the new crown has also begun.

“I just finished the intensified injection, and I feel more at ease!” said Zhang Wenying, an employee of the IKEA Huiju Shopping Center store. “Now the mobile vaccination truck is parked at the gate of the shopping mall where I work. It’s really convenient!”

Recently, the reporter saw in the North Gate Plaza of Huiju Shopping Center in Xihongmen Town, Daxing, Beijing. Before two mobile vaccination vehicles, vaccinators lined up in an orderly manner. Under the guidance of the staff, they signed and signed informed consents. Fill in the vaccination sheet, vaccinate the new crown vaccine, and stay in the observation room for observation.

In Daxing District, where a cluster of epidemics occurred at the beginning of this year, 23 temporary vaccination sites quickly “returned to work”, and 13 mobile vaccination vehicles also quickly set off into communities, villages, and business circles to provide convenience for vaccinators. In Fengtai, Beijing, more than 8,000 merchants and more than 1,000 employees in the Xinfadi market were vaccinated with the new crown vaccine booster in batches. On October 23, at a vaccination site in Yizhuang Town, Daxing District, citizens filled out a notice before vaccination.Photo by Xinhua News Agency reporter Peng Ziyang

Since mid-October, cities such as Xi’an, Guangzhou, Hefei, and Beijing have successively launched intensified vaccination for key populations such as public security, fire protection, education, health care, transportation, and logistics.

According to data from the National Health Commission, as of October 23, China has reported a total of more than 2.2 billion doses of new crown virus vaccines, and the number of people who have completed the entire vaccination has exceeded 1 billion.

“According to the analysis of domestic and foreign research results, after vaccination, the effect of preventing infection, especially the prevention of severe illness and death, is better.” said Wang Huaqing, chief expert of the immunization program of the Chinese Centers for Disease Control and Prevention. Compared with the vaccine, the risk of infection is greatly reduced.”

Wang Huaqing said that with the passage of vaccination time, the level of neutralizing antibodies of the recipients is decreasing, and the protective effect is weakening. Boosting immunity can increase antibody levels and quickly rebound antibody levels. Therefore, it is very necessary to increase the number of vaccination shots after the entire course of the new crown vaccine.

See also  The resuscitations are emptied but the infections start to rise again: "A great sense of liberation" 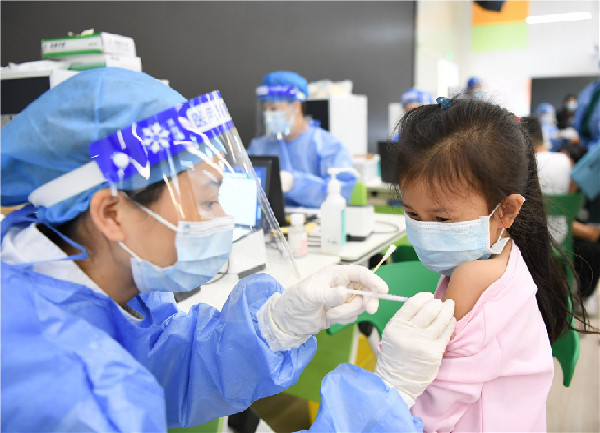 The relevant person in charge of the Beijing Municipal Vaccination Organization Coordination Working Group stated that the dense population of schools and kindergartens can easily cause the local spread of infectious diseases. The new crown virus vaccination for people aged 3 to 11 years is an important part of building an immune barrier for the entire population. It is also an important measure to stop the spread of the new coronavirus.

According to data released by the State Council’s Joint Prevention and Control Mechanism Scientific Research Team, the annual production capacity of China‘s new crown vaccine is close to 5 billion doses, and it is expected that this year’s output will exceed 3 billion doses, which will be gradually realized in the second half of the year.

See also  Green pass, 80% of suspended sanitary ware continues to work. The Order of Doctors: "They commit a crime"

Zhang Yuntao, chief scientist and vice president of Sinopharm China Biotechnology Co., Ltd., said that in order to meet the need to increase the supply of needles, China National Biotech has built a three-phase production workshop at the Beijing Institute of Biological Products and two phases of production at the Wuhan Institute of Biological Products. In the workshops, sub-assembly workshops have been built in Lanzhou, Changchun, Chengdu, and Shanghai.

“At present, we have established vaccine supply partnerships with more than 50 countries. Among them, nearly 20 countries have initiated the promotion of intensified injections, and Kexing will make every effort to ensure the supply of vaccines.” Yang Guang said, “In the epidemic In China, no country can take care of itself. Only when we work together can we successfully defeat the epidemic.” (Reporter Luo Xin, Li Chunyu, Klin Miaomiao)

Mps, 9 months profit at 388 million. Revision for the business plan

Three men go to jail for the crime...

The minstrel Adolfo Pacheco passed away

The champion debuts at the Hernán Ramírez

Call to form the Table of Victims of...

What’s next for the Colombia U-20 team