Zhejiang News client news reporter learned from the Hangzhou Highway Traffic Police Detachment on January 25 that the overall operation of the expressways in the Hangzhou area is safe and orderly after the Spring Festival is halfway through. Since the Spring Festival, the average daily traffic flow in the first three days has been 530,000 vehicles, respectively 428,400, 505,700, and 657,000, showing a significant increase; the high-flow sections are mainly concentrated in the Linglong Interchange Section of the Hangzhou-Huizhou Expressway in the Anhui direction, and the Datong branch line in the Jiangxi direction. Anjiang hub section, Hangxinjing Expressway Jiangxi direction Changkou Interchange, Longmen Ancient Town Interchange, Zhongbu Interchange, Hangyong Expressway Hangzhou Hongken hub section.

It is worth noting that, starting from the second day of the Lunar New Year, the traffic flow of expressways heading to tourist attractions such as Qiandao Lake, Jingshan, and Daming Mountain in the province has increased significantly, and there are queues for nearly four kilometers on some sections of the road.

Since January 25, there has been return traffic in the traffic police area of ​​Hangzhou Expressway. Among them, the traffic flow of Hangxinjing Expressway and Hanghui Expressway towards Hangzhou has increased significantly.

Hangzhou Highway Traffic Police Reminder: The return traffic has arrived. Please drive carefully and travel in a civilized manner when driving at high speed. In case of long queues and delays on various expressways, please update your navigation equipment in time and make reasonable detours according to the navigation prompts. Affected by severe weather such as ice, snow and low temperature, the Hangzhou Expressway Traffic Police will take control measures such as closing some toll station entrances and restricting traffic to “two passengers and one danger” in light of the road conditions in the area under its jurisdiction. Drivers should keep abreast of the latest road conditions before traveling.

In addition, this year’s Spring Festival toll-free period is from 00:00 on January 21 to 24:00 on January 27. For vehicles that are still driving on the expressway before the end of the free period, the Hangzhou Expressway Traffic Police suggests that drivers and passengers should, according to their actual location and time, Choose the nearest toll station to get off the expressway, and then re-enter the expressway to avoid safety accidents caused by rushing and speeding.

3. Behind the Hongken Hub of G92 Hangzhou-Ningbo Expressway in the direction of Hangzhou

5. Behind the G2504 Ring Road, Xiasha Bridge towards Hangzhou, and Zhangjiafan Interchange towards Quzhou

6. Behind the Yangcun Bridge Interchange in the Hangzhou direction of G6021 Hangzhou-Changzhou Expressway 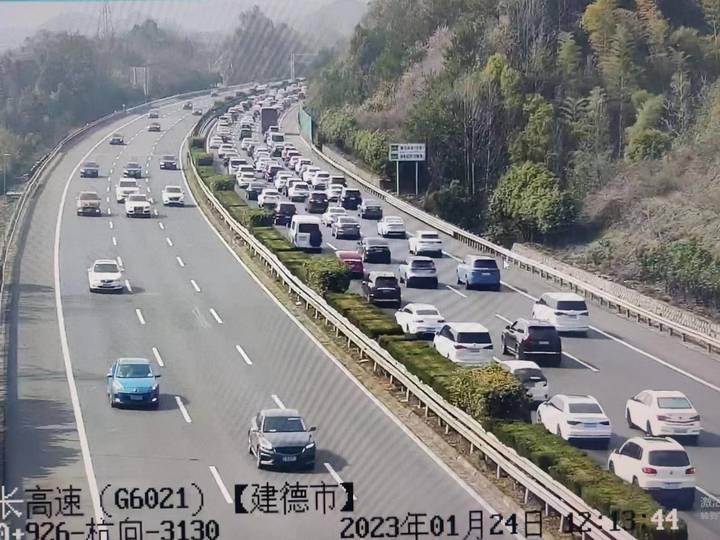 Since January 24, some high-speed sections in Hangzhou have experienced heavy traffic on the return journey.

Traveling during the holidays, while the traffic volume on the highway has increased sharply, the number of accidents has also increased compared with usual times. According to big data statistics, rear-end collision accidents caused by failure to maintain a safe distance between vehicles account for more than 70% of the total number of accidents.

Warm reminder from the Hangzhou Highway Traffic Police: When returning from the Spring Festival, focus on the following four points.

1. Pay attention to the weather and keep warm. Recently, in Hangzhou, low temperature, rain, snow and bad weather are obvious. When driving in ice and snow weather, keep in mind “slow down, control distance, and bright tail”, and avoid rushing to the direction, stepping on the brakes, and driving too fast. The temperature difference between morning and evening is large, so take precautions to keep warm.

See also  The world of sport and journalism remembers Galeazzi moved: "The voice of blue emotions"

2. Plan ahead and travel at off-peak times. Pay attention to traffic conditions and traffic safety tips in a timely manner, plan ahead and be familiar with routes, arrange travel time scientifically, set up navigation reasonably, and try to avoid travel peaks.

3. Drive carefully and in a civilized manner. When traveling during holidays, don’t be impatient in case of queuing and slowing down, don’t plug in and change lanes at will, and don’t illegally occupy the emergency lane (hard shoulder), so as to avoid some unnecessary scratching and collision accidents.

4. When driving at high speed, keep in mind the “five life-saving rules”. Fasten the seat belts for all employees, fatigue and distraction will kill your life, leave room for driving distance, accidents caused by tailing trucks, illegal parking dangers, breakdowns or accidents, “cars pull over, people evacuate, and call the police”, the three actions must be fast.

When the vehicle is moving and there are no casualties, evacuate the scene as soon as possible, drive the car to the nearest toll station and get off the highway, and call 12122 to call the police; Place the triangle sign at 150 meters away, and call 12122 after the personnel evacuate outside the guardrail on the right;

If it is a multi-vehicle accident, under the premise of ensuring safety, simply take a video or photo, exchange the driver’s license and driving license, get off the highway at the nearest toll station or drive to the service area, call the police and wait for the traffic police to deal with it. Do not For a simple accident, stay on the expressway for a long time, so as not to cause unnecessary trouble and long-term congestion.

[Front-line interview]People worry about the second peak and...