Home News Family of woman who was bitten to death by the fourth largest poisonous snake in online shopping was compensated 330,000 – People – cnBeta.COM
News

Family of woman who was bitten to death by the fourth largest poisonous snake in online shopping was compensated 330,000 – People – cnBeta.COM

Recently, the People’s Court of Haidian District, Beijing announced a civil first-instance judgment in a case involving disputes over the rights to life, health and body.The details of the case are that in June 2018, in Weinan, Shaanxi, a girl named “Yi Mou” on the Zhuanzhuan platform contacted Shao Mou through the platform and purchased Silver Ring Snake twice.

In July last year, Yimou was bitten by a silver ring snake. Her mother Qimou sent her to the hospital for treatment. After evaluation, she was brain dead. Yimou was taken back and died at home.

According to a certain parent, he sued Zhuanzhuan Platform, the sellers of Yinhuan Snake, Shao, Yang, and Wang, as well as two express delivery companies, Shentong and Best, and demanded compensation of more than 1.5 million yuan. 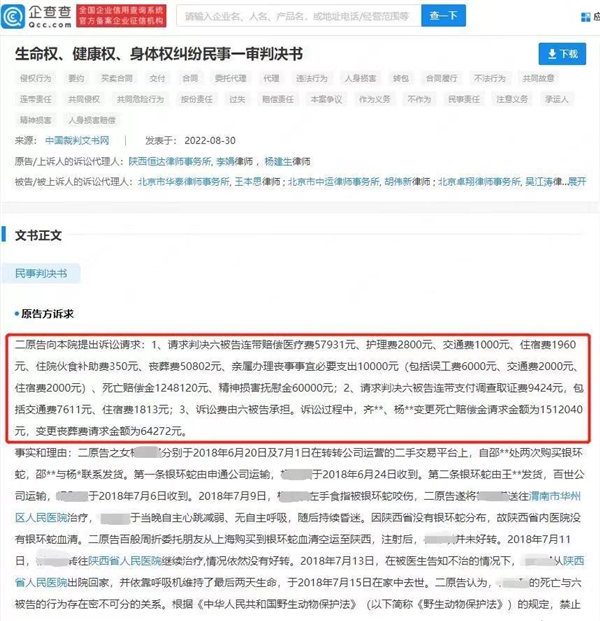 The court held that, according to the judgment standard of “if there is none, no”, if the krait was not delivered to Yimou, it would not suffer the damage caused by the bite of the krait. There is a factual causal relationship between the six defendants and Yimou’s damage consequences.

In the end, the referee’s result was:The six defendants paid a total of about 336,900 yuan in compensation, of which the three sellers of Yinhuan Snake paid about 252,700 yuan, the Zhuanzhuan company paid about 33,700 yuan, and the two express companies paid about 50,500 yuan.

It is understood that the silver ring snake is the fourth largest venomous snake on land. Its venom glands are very small, but the toxicity is extremely violent. If left untreated within a few hours, death is often due to respiratory paralysis.

See also  The "Bioshock" movie will be directed by the director of "I Am Legend" - Movie - cnBeta.COM

Credit Suisse aims to divide the investment bank into three

Fontana: “Salvini’s leadership is not at risk. I...

Basketball, Nutribullet introduces itself to the city: here...

Bairo says goodbye to the Alpine and lover...

Election results, we think of the new Meloni...

Woman attacked in a car in Resana: the...