“The Chinese people’s rice bowl must be firmly held in their own hands at all times. The rice bowl is mainly filled with Chinese food.” “1.8 billion mu of arable land must be well deserved”…

The Central Rural Work Conference was held in Beijing from December 25th to 26th. Prior to the meeting, General Secretary Xi Jinping presided over a meeting of the Standing Committee of the Political Bureau of the Central Committee to study the work of “agriculture, rural areas and farmers” and delivered an important speech. The Central Rural Work Conference conveyed and learned the important speech of General Secretary Xi Jinping.

“To ensure food security, everyone is responsible.” “The party and the government must be responsible for real results”… The word “responsibility” in the general secretary’s important speech is extremely important.

Agriculture is the state. Since the 18th National Congress of the Communist Party of China, General Secretary Xi Jinping has been concerned about the “three rural issues” and has always attached importance to food security. As early as the 2013 Central Rural Work Conference, General Secretary Xi Jinping demanded that “the Chinese people’s rice bowl should be firmly in their hands at all times.” At the 2020 Central Rural Work Conference, the general secretary emphasized that “hold firmly To take the initiative in food security, grain production must be stepped up every year.”

In the face of major changes unseen in a century, at the historical intersection of the “two centenary” goals, at this year’s meeting, the general secretary once again sounded the food security alarm for everyone, emphasizing the word “responsibility”, what’s the point? Deep meaning?

Steady words and progress while maintaining stability are the main keynotes of next year’s economic work. Grain stabilizes the world and stabilizes the food, which is of special importance.

my country’s grain output has remained above 1.3 trillion catties for seven consecutive years, which has effectively guaranteed the food security of a country with a population of 1.4 billion. However, it should also be noted that due to the large population and limited land, my country’s food supply and demand are still in a tight balance in the medium and long term, and the “tight balance” is getting tighter, and the string of food security cannot be loosened at any time.

Looking internationally and domestically, the situation is not relaxed——

Factors such as epidemics in the century and extreme weather have brought uncertainty to global food production. In recent years, when there has been a turmoil in the world, countries first tightened their food bags. my country is also facing challenges such as constraints on water and land resources and rising prices of agricultural materials. Food security must be based at home. To ensure the stability of economic and social development, we must stabilize the “agriculture, rural areas and farmers” and the grain “ballast stone”, and use the stability of domestic grain production and supply to cope with the uncertainties of the external environment.

“In response to various risks and challenges, we must focus on the national strategic needs, stabilize the basic agricultural market, and do a good job in the work of “agriculture, rural areas and farmers”. “Measures must be firm and execution must be strong.” The production-sales balance zone must ensure area and output”…

The important speech of the general secretary is extremely wordy.

It is a major strategic issue to secure the jobs of the Chinese people. You can’t just calculate economic accounts, not political accounts, but only current accounts, not long-term accounts. No matter whether it is central or local, no matter the main production area, the main sales area or the production and sales balance area, no one is a bystander. The responsibility for food security must be carried together, and we must not shirk responsibility or place hope on dispatching and importing.

Key varieties should be vigorously protected

“It is necessary to adjust the structure on the ground, expand soybeans and oilseeds, and see measurable results.” General Secretary Xi Jinping emphasized.

Entering a new stage of development, my country’s development internal and external environment has undergone profound changes. The Central Economic Work Conference held not long ago put forward the correct understanding and grasping of five major theoretical and practical issues, one of which is to “correctly understand and grasp the supply of primary products.”

General Secretary Xi Jinping emphasized that ensuring the supply of primary products is a major strategic issue. The Central Rural Work Conference proposed that we must do our best to do a good job in grain production and the supply of important agricultural products, stabilize the grain area, and vigorously expand the production of soybeans and oilseeds. This sends a very clear new signal.

This is the morning of October 21, 2021. General Secretary Xi Jinping went into the field to observe the growth of soybeans when he was inspecting the Yellow River Delta Agricultural High-tech Industry Demonstration Zone in Dongying City.Photo by Xinhua News Agency reporter Wang Ye

With a population of 1.4 billion, we cannot expect others to feed it.

In recent years, my country has been in sufficient supply of rations, but soybeans and edible oil have been imported on a large scale and their dependence on foreign countries is relatively high. In 2020, my country imported more than 100 million tons of soybeans and 9.83 million tons of edible vegetable oil. With the improvement of people’s living standards and the increasing demand for meat, eggs and milk, the demand for feed grains such as soybean meal and edible oil has increased. In the future, we must plan ahead in order to earnestly secure our jobs. We must take hard measures, but more importantly, grasp the actual results, and take multiple measures to grasp the key varieties.

1.8 billion acres of arable land should not be compromised

Everything is born in the earth, and the earth is born with auspiciousness.

Cultivated land is the lifeblood of food production and the foundation of the sustainable development of the Chinese nation. 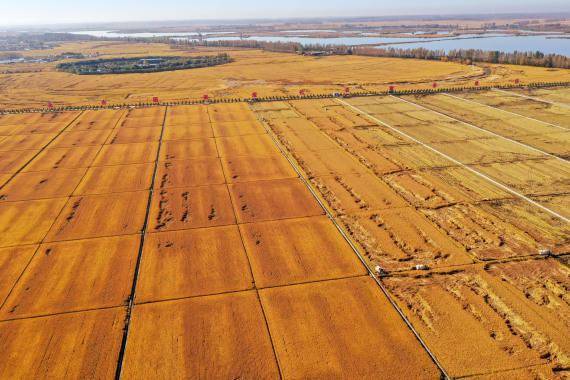 “The requirements for arable land protection must be very clear, 1.8 billion mu of arable land must be worthy of its name.” “Farmland is farmland, and it must be fertile land”… Regarding the issue of arable land, the general secretary’s important speech directly addressed prominent issues, with high demands, a strong tone, and deployment. Reality.

In recent years, with economic and social development, the area of ​​arable land has decreased in some areas. In some areas, fertile land does not grow food, but instead builds breeding farms and grows flowers and trees. From a local perspective, the economic benefits are obvious, but from a global perspective, it is a hidden concern for food security. Some areas illegally occupy arable land, some dominate the superior and compensate the inferior, and occupy paddy fields to make up dry fields, further exacerbating the risk.

“You can’t get amnesia when it comes to eating.” “Even if your life gets better every day, you don’t have any right to waste.” “You can never say that food has passed the customs.” , Stay further”… Since the 18th National Congress of the Communist Party of China, General Secretary Xi Jinping has attached great importance to the “eternal subject” of food security.

Weekend of competitions with the Italian canoe championships...

US Supreme Court abolishes the right to abortion,...

Illegal abortion in the world: in which countries...

Liaoning felon escaped from prison, what happened to...

He leaves the hospital to see the Maneskins...

Belluno, ecstasy and cocaine in the car: arrested