On October 31, Tianshui City Emergency Rescue Association issued a letter of assistance. The letter said that as of that day, the front-line epidemic prevention work had continued for 11 days, and disaster preparedness materials had basically been exhausted. The current shortage of materials has seriously affected the disaster relief operations. The following items are specially sought for help from caring people, units and entrepreneurs in the society: medical protective clothing, medical footwear, medical headgear, N95 masks, etc.

People familiar with the situation: urgently needed rescue, lack of manpower and materials

On the afternoon of November 1, a local person familiar with the matter in Tianshui, Gansu, Mr. Sun (a pseudonym), said in an interview with Epoch Times that the local epidemic situation was severe and rescue workers and protective materials were urgently needed.

Mr. Sun said: “The Tianshui Emergency Rescue Association is the only local rescue organization registered. It has been working in Tianshui City for 13 days. It takes 16 hours a day. The team members are very tired. In addition, some communities are completely closed, and some If the team members can’t come out, there will be fewer people.”

“In the first few days, we did the disinfection on the front line. Everyone just used the protective equipment that they had previously stored. I didn’t expect that the Tianshui epidemic would be so fast and so urgent that the protective equipment was not enough. At that time, the Tianshui Red Cross did not deploy materials in time. So the rescue team sent a letter of help in their own charity group. Later, the Red Cross deployed some supplies.”

“Although they are wearing N95 masks, because they do a lot of disinfection every day, the masks are wet, and the disinfectant will also enter the respiratory tract through the masks. There may be two unregistered rescue teams in Tianshui, but there are only these three at present. They are killing them. For the entire Tianshui City, these three teams are far from enough. Now the city has implemented traffic control.”

Tianshui citizens: even more strict than the lockdown of Wuhan, they know that government data is untrue

However, Mr. Liu (pseudonym), a local resident of Tianshui City, said in an interview with The Epoch Times reporter on the afternoon of November 1 that the current lockdown of the epidemic is stricter than the lockdown of Wuhan. They all know that the official has not released real data, and the people panic.

Mr. Liu said: “The city is basically closed here, but the government hasn’t announced it. This time, Tianshui’s control is stricter than in Wuhan. Now, there are no people and no cars on the street.”

“The people are panicking now, because even though a dozen cases have been announced, they all know that the government’s figures are not true. In addition, this time the prevention and control are particularly strict. This has never happened in Tianshui, indicating that the epidemic is very serious. The source of infection in these cases, the government did not say how they were infected.”

See also  Monsignor Miglio becomes cardinal, a hundred from the Canavese and Rome to attend the consistory

Mr. Liu told the Epoch Times reporter that four students in Tianshui Health School were infected with the disease, but the school blocked the news.

He said: “Four students in Tianshui Health School were infected. They supported the local nucleic acid testing site. After the accident, the surrounding area of ​​the health school was sealed to death. As long as you pass there, the health code turns yellow. I have a house over there. I originally wanted to go there to fetch things, but my family said they couldn’t go. Maybe they couldn’t go out. We couldn’t move around. We have done nucleic acid twice in four days, and we have to continue doing it.”

Mr. Liu said that because the ambulance was busy with patients suffering from the epidemic, people with other illnesses died due to delays in first aid.

Mr. Liu said: “There are basic patients at home, so I can only call 120 ambulances, but ambulances are limited. Can they be used in the city? One family in our group said that his family urgently needs to go to the hospital because of basic diseases. Called 120 hasn’t arrived late, and the person has passed away.”

According to the circulating information released by the CCP’s Health Commission, of the 29 new cases in Gansu on the 29th, 3 were health school students. All three have participated in nucleic acid sampling volunteer services. One of them had collected samples in the school laboratory, and the other two had taken a car to the town government to send nucleic acid samples.

See also  Thirty applications for the post of commander of the traffic police alone: ​​no candidate comes from Friuli 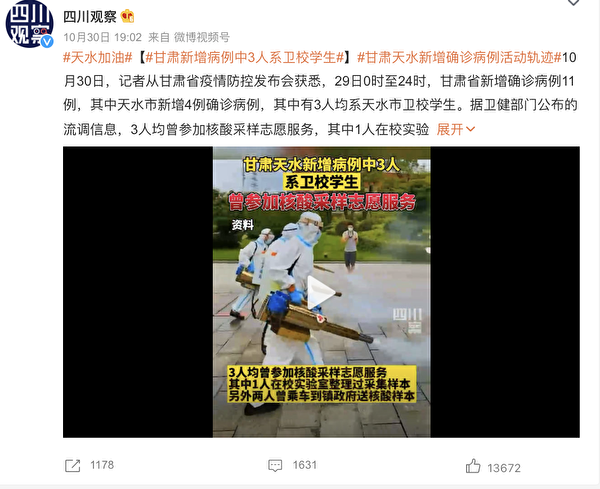 The Epoch Times reporter called the Tianshui City Health School in Gansu Province on the afternoon of November 1 to inquire about the epidemic. The teacher who answered the phone said that he would not accept media interviews and the specific situation is unclear.

Afterwards, a reporter from The Epoch Times called the Tianshui CDC for inquiries, but no one answered the call.

Tianshui City in Gansu Province, formerly known as Qinzhou and Shangju, is a prefecture-level city under the jurisdiction of Gansu Province. There are 2 districts and 5 counties under its jurisdiction, with a total area of ​​14,300 square kilometers and a permanent population of about 3 million.

Before Fumio Kishida’s visit to the UK, the Japanese Parliament assembled experts from constitutional amendments: We must be alert to the fact that Japan amends the constitution_Hangzhou Net

With the correct labels, delivery is ensured

Stromboli, tsunami wave of one and a half...

Tsunami in Stromboli, tsunami wave of one and...

Pio XII Institute of Misurina: the numbers of...

The 12th Prosecco Run is stronger than bad...

Cagliari, disabled boy without an assistant at school...