Home News Go to the grassroots in the new year丨Walk into the snowy plateau outpost and their youth gathers in the “nameless lake”_Guangming.com
News

Go to the grassroots in the new year丨Walk into the snowy plateau outpost and their youth gathers in the “nameless lake”_Guangming.com

In Yunding, a high mountain at an altitude of 4,520 meters in the southwestern border of the motherland, the Wuming Lake Frontier Defense Company of a border defense regiment in the Tibet Military Region has long been shouldering arduous tasks of border defense. Before the Spring Festival, the headquarter reporter went to the Wuming Lake to experience the new look of the frontier defense.

In a border defense regiment of the Tibet Military Region, soldier Yang Bajin solemnly took over a five-star red flag with special significance from his comrades-in-arms. Before the Spring Festival, he would escort the five-star red flag back to his company.

Yang Bajin, a soldier of the Wuminghu Frontier Defense Company of a border defense regiment in the Tibet Military Region:This flag is also a kind of honor in our unit. It was taken over by our old company commander from the Tiananmen flag team in 2018. Now it is placed in our regiment history museum. We have to get it to the front line of border defense every year before the Spring Festival. This flag unfurls and declares our sovereignty.

Yang Bajin’s Wuming Lake Company is stationed at a mountain platform at an altitude of 4,520 meters in the south of Tibet. lake. 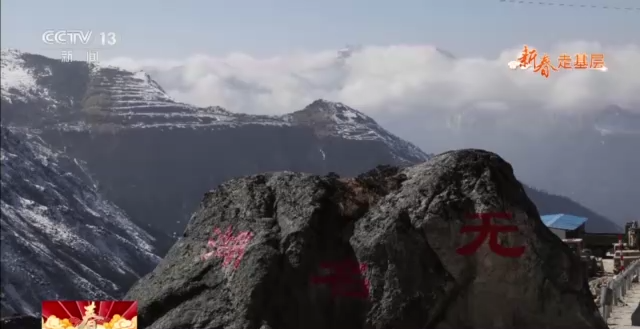 The word “Wuming” of Wuming Lake is taken from the military name of “Unknown Highland” in a certain operation in 1987, and the origin of “Lake” is said to convey the first generation of company officers and soldiers’ respect for water under difficult conditions. Longing, some say it comes from the sea of ​​clouds churning in the mountains. In the understanding of the current company commander Gong Hongyu, Wuming Lake represents a kind of spirit of the officers and soldiers of the company. 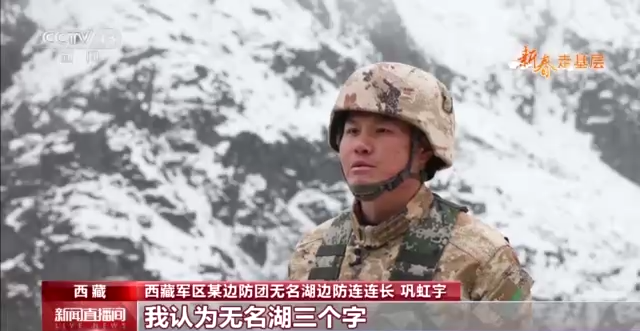 Gong Hongyu, Commander of Wuminghu Frontier Defense Company of a border defense regiment in the Tibet Military Region:I think the word “Wuming Lake” mainly lies in the word “lake”, because the water of the lake is calm, it is not as turbulent as sea water, and it does not rush for thousands of miles like rivers. on the post, like the water in the lake. 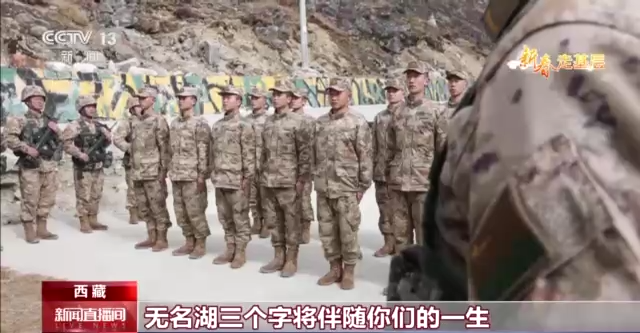 Through a special welcome ceremony, the company hopes that the new fighters can turn themselves into a drop of water and truly blend into the nameless lake. As the Spring Festival is approaching, Yang Bajin, three new soldiers and comrades-in-arms, led by the company commander, carry out routine patrols. The end of the patrol is the peak of a mountain with an altitude of more than 5,000 meters. 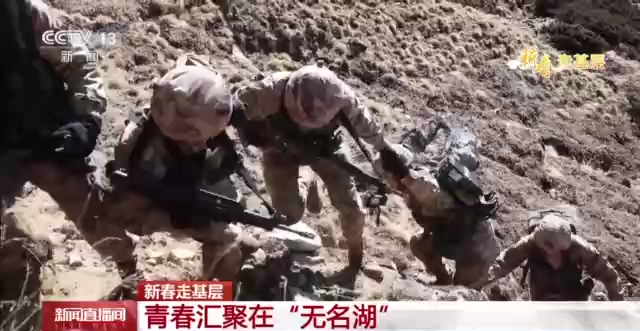 Climbing is a tactical skill that every officer and soldier of the Wuming Lake Company must have. The soldier Yang Bajin is one of the best. In last year’s “International Military Games 2022-Circle of Elbrus”, Yang Bajin represented China in the competition , In the case of an accidental sprain in the first kilometer of the race, he gritted his teeth and completed the entire 20-kilometer race, climbed to the top of Mount Elbrus, the highest peak in Europe, and even broke five individual records in the race. Yang Bajin, a soldier of the Wuminghu Frontier Defense Company of a border defense regiment in the Tibet Military Region:At that time, I kept thinking in my heart that if I die today, I will win the competition. At that time, the members of our team were waiting for me there, cheering, and our five-star red flag was raised there. At that time, the excitement in my heart came out again, and I rushed over directly when I saw the flag. At that time, I couldn’t do it anymore, my eyes were full of stars, and my body was about to collapse after crossing the line. 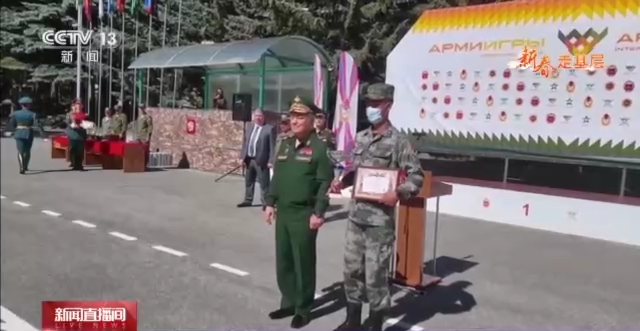 Yang Bajin’s selfless struggle won a precious silver medal for the Chinese team. Because of this, he made second-class meritorious service and was awarded the “Top Ten Models of the Fourth Consolidation of Frontiers and Stable Tibet” by the Tibet Military Region.

The patrol road is winding and steep. Walking among the piles of rocks, if you are not careful, you will step into the air. At this altitude of nearly 5,000 meters, ordinary people will feel heartbeat, dizziness, and limb weakness every few steps. But Yang Bajin and his comrades were able to keep marching at a steady speed. 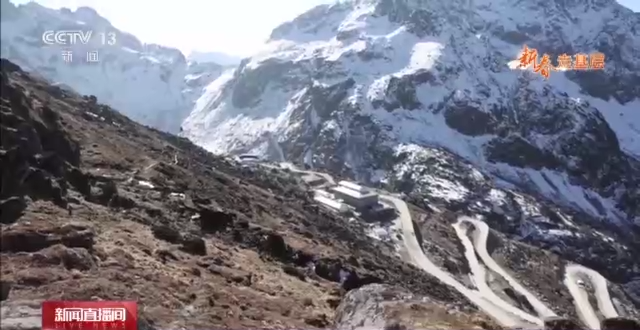 CCTV reporter Liu Guanqing:When we came here, the slope was very steep, and some slopes often reached more than 60 degrees, and it was very difficult to climb. It is not easy for patrol officers and soldiers to walk through such a patrol road dozens or hundreds of times in different environments during a year.

The soldiers of the left-behind company are also busy preparing for the New Year. Looking back at last year, this company has many things to celebrate. A brand new two-lane winding mountain road was built to the clouds. From then on, officers and soldiers can receive local supplies twice a week. They finally ended the hard life of digging ice for water in winter. 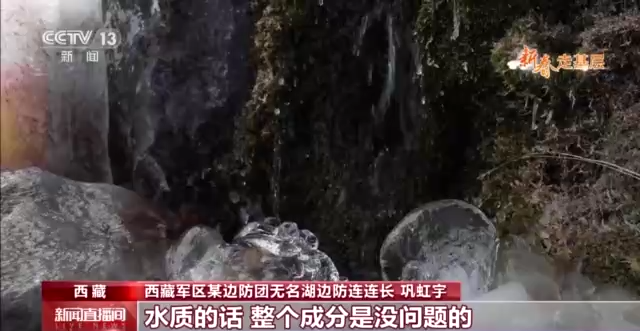 Gong Hongyu, Commander of Wuminghu Frontier Defense Company of a border defense regiment in the Tibet Military Region:The water flows down the hill through the degradation ponds and then to our pools. Last year, an expert group also checked the quality of our water. The whole composition is fine and can be drunk directly.

At noon, the patrol climbed to a high mountain point with an altitude of more than 5,000 meters, where they will declare their sovereignty.

Gong Hongyu, Commander of Wuminghu Frontier Defense Company of a border defense regiment in the Tibet Military Region:This national flag was brought back from the capital Beijing to our frontline defense. I think we should all deeply feel that we stand together with the motherland and the people, and our hearts are connected together.

See also  In two days, 52 drunk drivers were found in the Marca 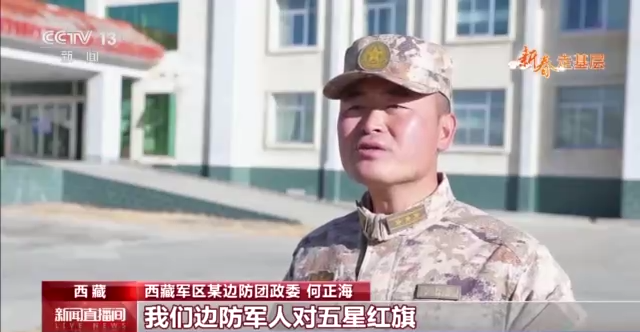 He Zhenghai, political commissar of a frontier regiment of the Tibet Military Region:Our border guards have a strong emotion for the five-star red flag. Whether it is in the international arena or on the front line of struggle, I will fight to the end with the national flag on my shoulders. This is the sense of honor and mission engraved in our Chinese soldiers. 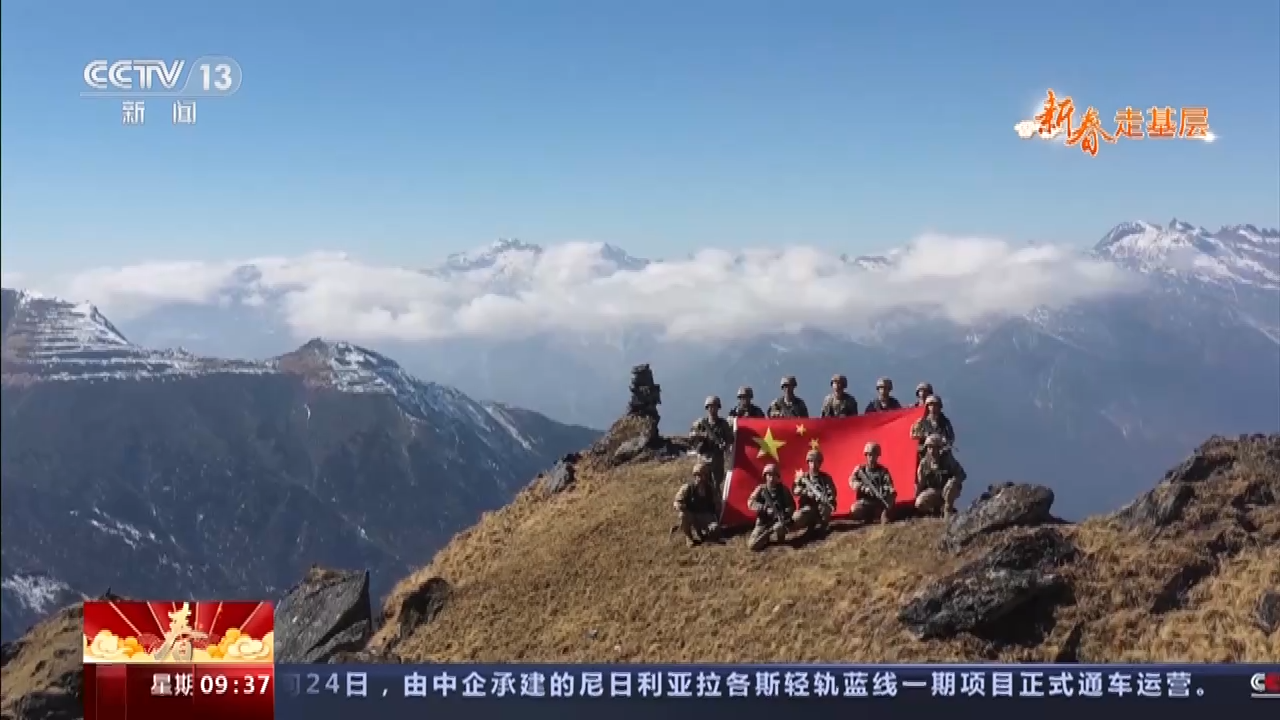 In the afternoon, the patrol team returned safely. At this time, the barracks had also been decorated, and the Spring Festival of the Wuming Lake Company kicked off. 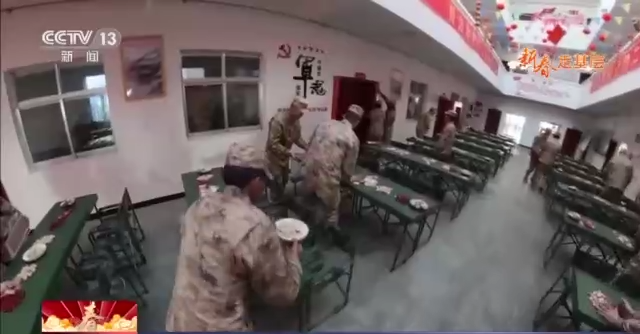 This is the 35th Spring Festival of the Wuming Lake Company. During the first Spring Festival, five green peppers were the only vegetables on the New Year’s Eve dinner table for border guards and soldiers. Now there is a fourth-generation insulated barracks in the cold post at the border, complete with fitness and entertainment facilities. Everything is available, and the flavor of the Spring Festival is getting stronger and stronger. At the moment of national celebration, on the sentry tower of Wuming Lake, the sentry chief stared at the screen, taking a panoramic view of the border defense movement. After dark, on the cold sentry post, the company commander took over the steel guns from his comrades-in-arms, guarding the hard-won peace and harmony of the motherland’s frontiers . 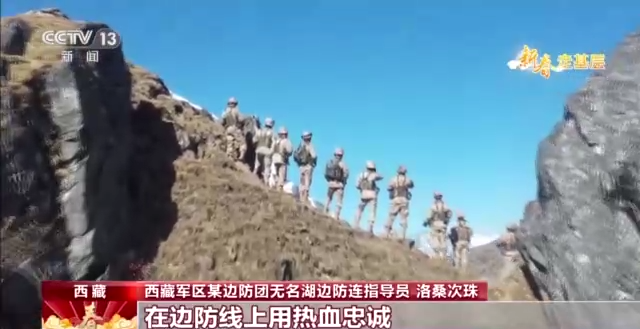 Luosang Cizhu, the instructor of the Wuming Lake Frontier Defense Company of a border defense regiment in the Tibet Military Region:Our generation of frontier defense officers and soldiers are the beneficiaries of advancing the construction of modern border, sea and air defense. At the same time, they are also the vanguard of the construction of the front line. Passionate and loyal to the flowers of youth and glory.