[New Tang Dynasty, Beijing, September 23, 2022]An Iranian woman was arrested and tragically killed for not wearing a hijab. Iranian media reported that people across the country took to the streets to protest, chanting slogans against the dictatorship. Chinese netizens express their envy at Iran’s ability to report the truth and take to the streets to protest.

A 22-year-old Iranian woman, Mahsa Amini, was detained for allegedly violating the “hijab law” and died in custody after being suspected of being abused. The incident sparked public outrage, and many Iranian media reported it in the headlines. Beginning on September 16, a wave of demonstrations broke out in many cities across the country, and the authorities also began to violently crack down, and the number of arrests and deaths continued to increase.

The Central News Agency reported on the 22nd that the death toll of the protesters increased to 8, at least 450 were injured, and 500 were arrested.

Numerous videos circulating on social media including Twitter and Facebook showed Iranian women cutting their hair and burning their headscarves in protest.

There are also a large number of videos showing Iranian protesters using stones and other weapons to push back the police who were violently suppressing the people, overturning police cars together, or setting fire on the streets to stop the police. There were also protest teams chanting anti-government slogans such as “oppose the dictatorship”.alsohave videoIt shows protesters besieging a mansion and tearing down a portrait of Iranian ruler Khamenei from the wall.and videoIt was shown that protesters burned Khamenei’s head in public.

See also  Ivrea Carnival, 29 Golden Corvi awarded in the heart of the Borghetto

On China‘s Weibo, a large number of netizens used the Iranian protest to express their will to oppose the Chinese Communist regime. Some netizens said: “When I think that people can still protest in the streets, and they can still publish their remembrances in newspapers, tears flow directly.”

Some netizens wrote: “Can I burn the nucleic acid testing booth?”

Some netizens also mocked the CCP’s mandatory requirement to wear a mask by wearing a headscarf.

Some netizens envy Iran and the freedom of news reporting.

Another netizen said: “Iran has no Hu Xijin, North Korea has no nucleic acid, and Russia can march…” 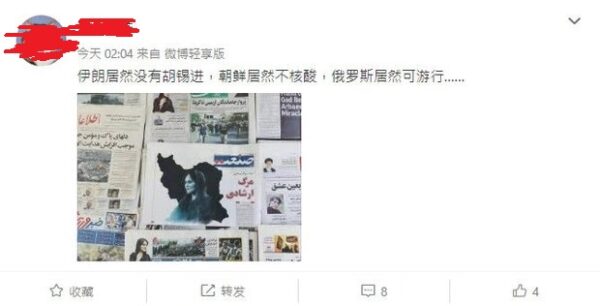 In Russia, following President Vladimir Putin’s order for military recruitment, another round of anti-war demonstrations has been launched across the country, and thousands of people have reportedly been arrested.

The end of the emergency triangle, a flashing light will send him into retirement?

Fontana: “Salvini’s leadership is not at risk. I...

Basketball, Nutribullet introduces itself to the city: here...

Bairo says goodbye to the Alpine and lover...

Election results, we think of the new Meloni...

Woman attacked in a car in Resana: the...