Home News Iron bridge closed after the stake: Rome broken in two, the odyssey of the inhabitants
News

Iron bridge closed after the stake: Rome broken in two, the odyssey of the inhabitants

“The bridge of Industry is burning.” Thus the alarm raised by the citizens to the fire brigade at the stake was triggered which in the night between 2 and 3 October made the iron bridge in Rome useless, which connects two populous neighborhoods, Marconi and Ostiense. The outbreak, the flames, the blackout of the whole area. With the closure of the Ponte dell’Industria, which will remain unusable for months, the city is split in two and the inhabitants of the two populous neighborhoods are forced to long queues to circumnavigate the area and go to work or take their children to school. Therefore, the repercussions on traffic are heavy, even for those arriving in the city from outside Rome: a real odyssey for motorists bottled up from the early hours of the morning. The bridge is in fact a neuragic junction of the city. And parliamentary questions are already being announced on the dynamics of the fire.

The stake on the bridge – carried out in 1862-63 by a Belgian company, built in England and assembled in Italy – would have started from the homeless camp under the bridge, in the middle of the brushwood, on one of the banks of the Tiber, but it is not excluded. the track of a short circuit in the electrical network. On the other hand, there do not seem to be any hypotheses of willful misconduct. Immediate intervention by the Fire Brigade, given that the Ostiense detachment of the Corps is located right under the bridge, with six teams immediately at work, including divers and the Nbcr nucleus, Nuclear biological chemical radiological.

See also  Influence, research and innovation to strengthen the defenses of the over 65s

Technicians at work to determine the causes of the fire

Meanwhile on the bridge there is a coming and going of technical experts from the Municipality, the Fire Brigade and the Carabinieri. We try to reconstruct the dynamics of the fire that caused the fall into the Tiber of a side walkway that carries the electricity and water cables in the two districts that had been in blackout for a long time. A first report will arrive at the Public Prosecutor’s Office in the next few hours and only then will the magistrates of Piazzale Clodio open a file on the burning of the bridge. In the meantime, the experts of the Capitol, arrived for a first inspection, await the authorization of the Municipality to be able to carry out the examinations on the materials of the structure and assess the extent of the damage.

Francesco Notaro, commander of the fire brigade of Rome, explained that those of the iron bridge “are actually important damage, especially in the part where the bridge, therefore the supporting structure of the bridge, rests on the shoulder, where the supporting beam of the structure rests” which is the one that remained exposed to the fire for several hours. “Steel – explains Notaro – as we know is a good conductor and therefore, unfortunately, has contributed to spreading heat and deforming the structure”. When asked what triggered the fire, Notaro replies: “We are examining various hypotheses, we are also trying to collect together with the other investigators some images, perhaps from cameras that can provide us with further information”. 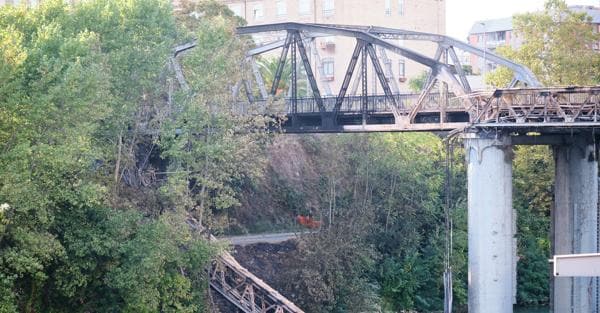 The walkway collapsed on the bridge of the Industry and the bundle of electrical cases that went up in flames during the fire. The iron bridge connects the banks of the Tiber between Ostiense and Marconi (LaPresse / Mauro Scrobogna)

The short circuit on the bridge: the insulation that protected the cables has melted

«What we can say today is certainly where the fire was most concentrated. It is evident, that point where there was this walkway that walked next to the bridge where bundles of cables walked, which, however, once the insulation that protected them was dissolved, began to make a little short circuit. We also saw in the films what we can call sparks, but in the end they are shorts that also helped to spread the fire. So only after we were sure we had disconnected the electricity were we able to intervene more effectively and put out the fire ”, explained Francesco Notaro, commander of the fire brigade of Rome.

Cuadrado’s philosophy “I come from poverty and teach happiness”

Meanwhile in the world – International

Turnaround on the murder of the Lecco missionary...

[Must-see over the wall]International Women’s Network suspends all...

The distance between who sets the personal income...