[Epoch Times, August 12, 2022](The Epoch Times reporters Zhao Fenghua and Luo Ya interviewed and reported) On August 9, the internal training video of Sichuan Luzhou Fukang Hospital was exposed online. In the catalog displayed on the big screen, marketing content such as “how to make patients stay for a long time and queue up to send us money” appeared, causing a public outcry. The loss of medical ethics caused by for-profit treatment has once again become a hot topic.

In ancient China, pharmacies usually hung a pair of couplets: I hope people in the world are free from diseases, and it is better to put medicine on the shelf. Horizontal batch: Peace in the world. It reflects the benevolence and love of traditional Chinese medicine practitioners to patients. The content discussed at the internal meeting of Luzhou Fukang Hospital is obviously contrary to traditional medical ethics, causing huge controversy.

After the video was fermented, the hospital responded that “the ppt employees are new employees and have now left”, and claimed that “our president’s meeting emphasized service and medical skills.” However, public opinion did not buy the hospital’s response, and its justification was strongly questioned.

In mainland China, however, it is not uncommon for hospitals to target patients for marketing. On January 27 this year, at the summary meeting of Dongguan Kanghua Hospital in Guangdong, a banner was displayed that read “The New Year is born, the operating room is full of money!”, which caused an uproar. Under the pressure of public opinion, the hospital finally apologized to the public. 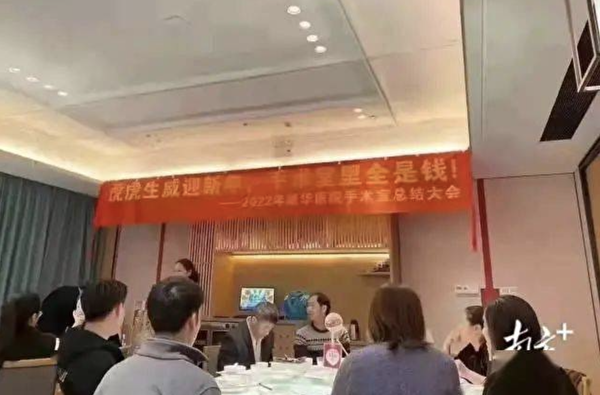 Medical ethics for profit is lost

Mr. Wang, a Shanghai citizen, said in an interview with The Epoch Times on August 12 that the practice of profit-making in Chinese hospitals is now quite common.

“Because there are interests, he must be desperate to prescribe medicines and give inspections, which is very powerful. Now this is a chronic disease in China for decades, and the reform of the hospital system is getting worse and worse. Now, this result has been caused. Because there are kickbacks, he Buying this medicine or medical equipment, there are rebates on everything, and the rebates are too severe, and even account for 60 to 70% of medical products. The common people can’t afford medical care.”

Mr. Wang believes that the emergence of profit-oriented marketing methods in hospitals is also related to the decline of overall social morality.

He said: “Everyone looks at money, doctors look at money, teachers look at money, then it will be troublesome. This society has no medical ethics or teaching ethics. He does everything to make money. , whatever they do, he asks you to open the knife, do you dare not to open it? I am really afraid to use all the savings of several generations. The morality has been extremely corrupted. “

Mr. Wang mentioned that under China‘s current medical insurance system, the burden of the elderly is getting heavier. “It is now stipulated that a retired worker pays a certain amount of 2,000 yuan (RMB, the same below), but the medicine itself costs two or three yuan.

“When my child didn’t have medical insurance, he paid 10 yuan for a blood test; if he had medical insurance, half of it would be reimbursed for you, but the blood test would cost 60 yuan, and half of it would cost you 30 yuan, but it was more than 10 yuan in the past. It will cost 20 yuan more. On the contrary, the more the people change now, the heavier the burden is. He (the hospital) is desperately squeezing the money from the patients.”

Mr. Wang believes that the lack of oversight leads to huge profits for the hospital, so he proposes to introduce a competition mechanism. “As long as a citizen sees a doctor (expends) 5% or 10% of the total salary of the previous year, all medical insurance will be reimbursed. You let the insurance company keep an eye on the hospital, do not give him random inspections, check each other, and the government will intervene again. For a moment, stop the procurement of medical equipment and medicines in the hospital, and the price of medicines will come down immediately.

“Now that he (the hospital) has no competitive pressure, it must be a monopoly. He can say as much as he wants, and the patient can’t help it. I have seen many families whose children are filial to the elderly and see their families go bankrupt.”

Chen Yongmiao, a Beijing-based constitutional scholar, told The Epoch Times on August 11 that the pursuit of profit maximization by hospitals is an inevitable result of medical industrialization.

See also  Omicron is 3 times more contagious than the Delta. Outbreaks also with the Green Pass

Mr. Chen Yongmiao said: “It is the inevitable result of the medical industrialization (reform) by Zhu Rongji in 1992. The hospital was originally a public welfare organization, and the staff’s salaries used to be financed, but later became a public institution.

“After the industrialization of medical care, the hospital will definitely become an institution of interest, and it will definitely take the plundering of patients as the first priority. He wants to maximize profits. Doctors take advantage of the information asymmetry between patients and hospitals to plunder and Exploitation, like this kind of public power.”

Mr. Chen Yongmiao believes that the pressure on patients in hospitals will become more and more serious.

He said: “With the start of the Great Depression, the medical industry itself has to survive. Anyway, when an institution wants to survive, it becomes very shameless, and it will definitely become more and more serious.”

There have been recent reports of medical disputes between doctors and patients in mainland China, and even homicides. On June 21 this year, at Liuzhou Men’s Health Hospital in Guangxi, a patient surnamed Huang slashed and wounded surgeon Mei Xping with a knife. The latter died after resuscitation failed. According to reports, the case is a doctor-patient dispute involving additional charges by the doctor.

In this regard, Chen Yongmiao said, “A lot has happened. If an institution wants to survive, it will become unscrupulous. After the industrialization of medical care, after the maximization of interests and the protection of public power, he (the hospital) is sure It is developing in this direction, and there are more and more organ reselling.”

The most difficult time to study abroad!The doctor recommended a 4-week truce for frequent injuries, which made Li Lei feel tormented – yqqlm

Stop for a second: Meta doesn’t want to keep the clock going

The new wave of Covid has started. Again...

Competition for emergency medicine, the candidate with the...

The cold wave affects the national temperature for...

Bills and expensive energy, pressing to postpone the...

Killing of mouflons at Giglio, the wrath of...

New government, how many chances does Salvini have...

The cold wave affects the national temperature for...

First step to the free pill, but it’s...

The farewell to Cimolai, a crowd in front...