Home News More than 20 provinces will be quickly frozen by cold wave. National Freezing Line Process Map to see when your home is “frozen”
News

More than 20 provinces will be quickly frozen by cold wave. National Freezing Line Process Map to see when your home is “frozen”

Original title: More than 20 provinces will be quickly frozen by the cold wave. The national freezing line process map to see when your home was “frozen” Source: China Weather

More than 20 provinces will be quickly frozen by the cold wave. National Freezing Line Process Map to see when your home is “frozen”

From today (November 20th) to 23rd, the third round of cold wave this winter will sweep across most of my country. The cumulative cooling in Anhui, Jiangsu, Jiangxi and other places can exceed 14°C. On the morning of the 23rd, the 0℃ line will reach the middle and lower reaches of the Yangtze River, and two-thirds of my country’s territory will be quickly frozen by the cold wave. China Weather.com has launched a national freeze line process map to see when your home will be “frozen”?

In response to this cold wave process, the Central Meteorological Observatory issued the third round of cold wave warning this winter. This cold wave cooling is not a “quick-freezing type”, but the cooling lasts for a long time, and the cumulative cooling rate is large, such as Huanghuai, Jianghuai, and northern Jiangnan. The local drop can reach 14°C or more. Hu Xiao, chief meteorological analyst of China Weather Network, said that it is expected that November 22 to 23 will be the most extensive and violent period of the cold wave during this round of strong wind cooling, and more than 20 provinces, autonomous regions and municipalities will be affected.

It can be seen from the national freezing line progress map released by China Weather that the freezing line will continue to advance south for three days from today. Specifically, on the morning of November 21, the front end of the 0°C line of the lowest temperature will reach the central and southern parts of North China and northern Sichuan, and the highest temperature in most northern regions will drop to freezing or below. Among the cities, the minimum temperature in Urumqi, Xining and Harbin will drop below -10°C. Harbin will drop below -10°C for the first time this year. The temperature in Beijing will also be around freezing tomorrow morning. 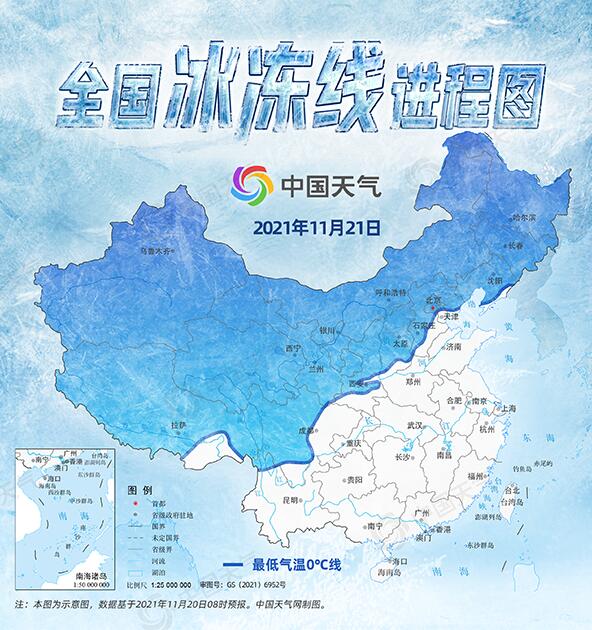 As the cold wave continues to move eastward and southward, on the morning of November 22, the freezing line continued to push south to Huanghuai and northern Yunnan. In the cities, the lowest temperatures in Shijiazhuang, Jinan and Zhengzhou will drop to freezing point. Zhengzhou is the second half of this year. It broke the freezing point for the first time. The temperature in Hohhot, Taiyuan and Yinchuan will drop below -10°C for the first time in the second half of this year. 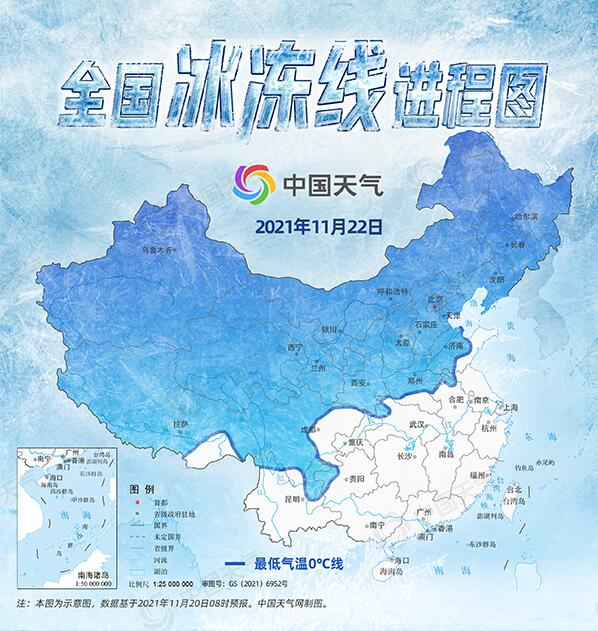 On the morning of November 23, the temperature in most parts of my country dropped to the lowest point during the current cold wave, and the frozen area will extend to the middle and lower reaches of the Yangtze River. Among the cities, Hefei, Wuhan, and Nanjing will all break the freezing point for the first time in the second half of this year. 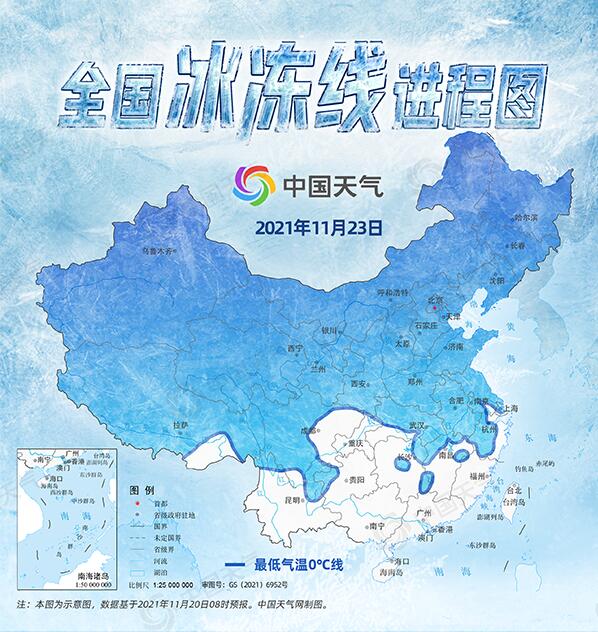 Although the cooling rate during this cold wave is not as good as the previous cold wave (November 4 to 8), due to the lower base temperature in the early period, it will be colder after cooling. From the 22nd to the 23rd, 19 provincial capital cities will hit the second half of this year. The temperature is coming to a new low. The current frontier of winter has advanced to Anhui and Jiangsu in the central and eastern regions. This cold wave process will also promote the winter process in the middle and lower reaches of the Yangtze River. Many cities in the central and eastern regions will be as cold as winter, and the temperature level will be close to December or even January of the year.

Hu Xiao reminded that there is a possibility of low temperature and cold damage during this cold wave, and it is necessary to do a good job of heat preservation and wind protection of vegetables. Farmers should cover crops with straw quilts in time, and heating equipment can be used if conditions permit. In addition, the cold wave has a wide range of effects and a long “standby time” for cooling. Friends in the south also have to turn out winter clothing such as down jackets and add clothes to keep warm in time. (Text/Jiang Yitu/Zhang Li Data Support/Hu Xiao)

State back to courage!Juventus wins three consecutive matches in all competitions and sets two records

Milan thud in Florence, beaten 4-3 by the viola

The Working Committee of the Organs directly under...

Covid, because in Italy there has not been...

Learn and implement the spirit of the Sixth...

Draghi: “The regular flows of migrants are a...