The Spring Festival on New Year’s Day is approaching, the mobility of personnel has increased, and the epidemic prevention and control situation is severe. How to scientifically and accurately prevent and control the “double festival” epidemic? Experts gave authoritative responses at the press conference on the Joint Defense and Joint Control Mechanism of the State Council held on the afternoon of December 29.

He Qinghua, the first-level inspector of the CDC of the National Health Commission, said at the press conference that the New Year’s Day and the Spring Festival are approaching, the number of overseas returnees increases, the mobility of domestic personnel increases, and the emergence of new mutant strains such as Omi Keron, these circumstances Both will increase the risk of the spread of the epidemic. Based on previous experience, six targeted measures are given:

One is to strictly restrict the movement of people in high-risk areas. Strictly restrict the travel of personnel in medium- and high-risk areas and the counties, cities (districts, and banners) where they are located. Persons from other counties, cities (districts, and banners) in the cities where the medium- and high-risk areas are located are not required to travel if they do need to travel. Hold a certificate of negative nucleic acid test within 48 hours.

The second is to strictly enforce travel requirements for personnel in high-risk positions. People in high-risk positions should be avoided as far as possible. Those who really need to travel must meet the requirement of leaving the position for more than 14 days and holding a negative nucleic acid test certificate within 48 hours, and report to the unit.

See also  Take a taxi to get around Belluno? With the "Travel Bonus" refunds of up to 500 euros

The fourth is to prevent transmission risks caused by inter-provincial tourism. For provinces (autonomous regions, municipalities directly under the Central Government) with medium- and high-risk areas, travel agencies and online travel companies should immediately suspend the operation of cross-provincial team tours and “air ticket + hotel” business in the provinces (autonomous regions, municipalities), and suspend the operation of land border ports by travel agencies and online travel companies City team travel and “air ticket + hotel” business. Cities at land border ports must promptly release warnings about the risks of free travel to the society.

The fifth is to strengthen the prevention and control of the journey. Increase the frequency of measures such as ventilation and disinfection of transportation stations and vehicles, reduce gathering and walking in vehicles, strictly check body temperature, health code inspection and pass, remind passengers to take personal protection during the journey, wear masks, wash hands frequently, Don’t get together, don’t gather, and “one-meter noodles”. People with symptoms such as fever, dry cough, and health code yellow codes must perform their personal protective responsibilities, and do not travel until risks are eliminated.

The sixth is to strengthen the investigation of key returnees. During the “two festivals” period, all localities must do a good job in the arrangement and grid management of key personnel in counties, cities (districts, banners) and high-risk positions where there are medium- and high-risk areas within 14 days. After the relevant personnel return to their hometowns Don’t go out or gather unless necessary. By adopting the above-mentioned measures, that is, “two stricts, two preventions, and two strengthening” measures, we strive to minimize the risk of epidemic spread and ensure that the people live a happy and peaceful holiday.

Railroads, ports, airports, none of them can relax

At the press conference, Zhuo Li, deputy director of the Emergency Office of the Ministry of Transport, introduced that according to preliminary predictions, the passenger flow during the New Year’s Day holiday is generally stable. In 2022, the national Spring Festival transport passenger volume will have a substantial increase compared with 870 million in 2021, and will even exceed the 1.48 billion in 2020.

As the number of overseas returnees began to increase, the pressure on port epidemic prevention and control has also increased. In this regard, Li Zhengliang, deputy director of the Department of Health and Quarantine of the General Administration of Customs, said that the customs adheres to the general strategy of “prevention of foreign imports and internal prevention of rebound”, strict port health quarantine, and strict implementation of health declaration card verification and temperature monitoring for all sea, land and air passengers. , Medical inspections, sampling and testing, and other quarantine measures, to investigate the risks of all entry persons.

At the same time, Li Zhengliang said that the customs will strengthen the quarantine of incoming goods, strictly do a good job in the monitoring and inspection and preventive disinfection supervision of imported cold-chain food and high-risk non-cold-chain container cargo at ports. If an overseas cold chain food production enterprise has a clustered infection of employees, measures shall be taken to suspend imports in a timely manner. At the same time, we will strengthen the monitoring and testing of imported cold chain foods, and promptly adopt emergency preventive measures to suspend import declarations if they are positive.

See also  Omicron: up to 91% lower lethality than Delta - Medicine 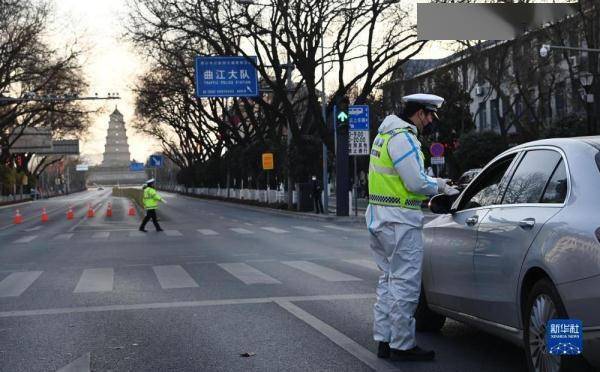 On December 29, the police were on duty at Yanta North Road, Xi’an.Photo by Xinhua News Agency reporter Tao Ming

In response to the fact that many people will travel by plane during the “Two Festivals”, Han Guangzu, Director of the Flight Standards Department of the Civil Aviation Administration of China, said that at present, there are local clusters of epidemics in many places in China. In order to stop the spread of the virus through aircraft, the Civil Aviation Administration of The disinfection of aircraft during domestic operation puts forward clear requirements:

Second, when suspicious passengers with related symptoms appear on the plane, and the cabin is contaminated by the passenger’s blood, secretions, vomit and other liquids, they must be disinfected at any time, and terminal disinfection must be performed immediately after the flight has landed.

The third is that when there are confirmed cases or asymptomatic infections of passengers on board, terminal disinfection shall be implemented after the flight has landed.

Fourth, when suspicious pollutants with infectious risks are found in the cargo hold, terminal disinfection of the cargo hold should be carried out after the flight has landed.

The Pope on Rome before Gualtieri: “It is a wonderful city, but not always dignified for citizens and guests”

Jorge Iván Ospina spoke before the announcement of...