Home News Perhaps there are Tibetan archives hundreds of years ago in the rock paintings on the shore of Lake Nam Co?The reporter follows the scientific expedition team to take you to visit
News

Perhaps there are Tibetan archives hundreds of years ago in the rock paintings on the shore of Lake Nam Co?The reporter follows the scientific expedition team to take you to visit

On the 100th anniversary of the birth of Chinese archaeology, in August this year, a team of experts who have long been engaged in archaeological research on the Qinghai-Tibet Plateau and reporters from the central station formed the “Nam Co Lake Scientific Research Team” to conduct the first survey of the Nam Co Lake Area, the second largest lake in Tibet, and northern Tibet. The ancient rock art, ancient ruins, ancient tombs and geological environment of the plateau are comprehensively investigated from the perspective of “four in one”, including the first scientific dating of Tibetan rock art.

The famous landmark on the north shore is the “Holy Elephant Tianmen”, which is a famous scenic spot in Nam Co just like Tashi Island. If Tashi Island stretches into the water like a swan, then the “Holy Elephant Heaven Gate” is like a huge natural stone statue standing on the shore, forming a huge gate between the elephant body and the trunk, so it is called As the “Tianmen”.

On the other side of it, you can see the main peak of the famous Nyainqentanglha mountain range, mountains and lakes, forming the most beautiful distant view! Nam Co circumnavigates the lake for about 300 kilometers, and now it takes one to two days to drive along the highway by the lake. 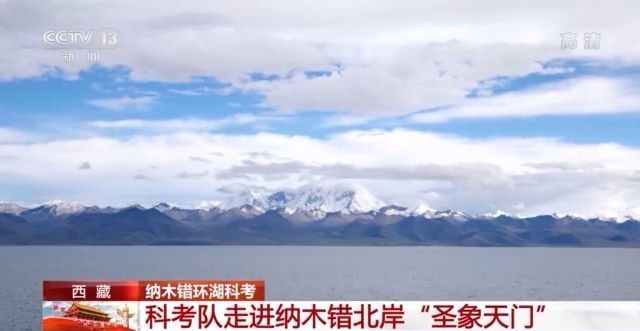 The scientific research team around the lake, composed of many domestic scientific research institutes and cultural and tourism departments in Lhasa and Nagqu, with the “Holy Elephant Tianmen” as the center, continues to conduct multi-disciplinary research on many cave rock paintings and ancient sites on the north bank of Nam Co. Comprehensive investigation.

The Nam Co Lake Research Team investigated and recorded more than 400 very exquisite painted rock paintings, many of which are classics of hunting rock paintings on the plateau. 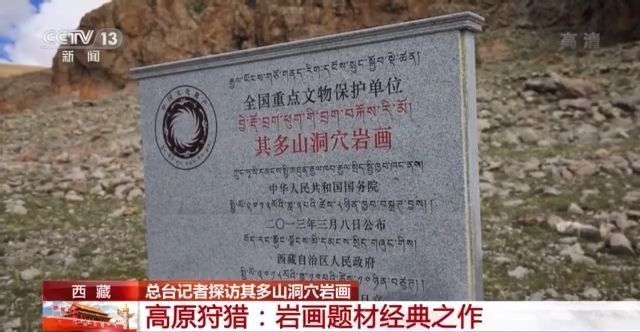 Driving about an hour from “Sacred Elephant Tianmen”, we came to the famous mountainous cave rock paintings on the north bank of Nam Co. In 2013, it was listed as the seventh batch of national key cultural relics protection units. This is the only rock art national protection unit in Tibet. 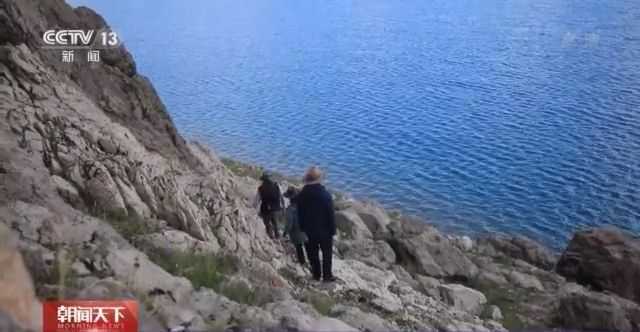 In August, on the north shore of Nam Co, it is the season when the plateau plant Meconopsis is blooming. The four petroglyphs are distributed along the shore, all of which are climbed by the scientific expedition team. 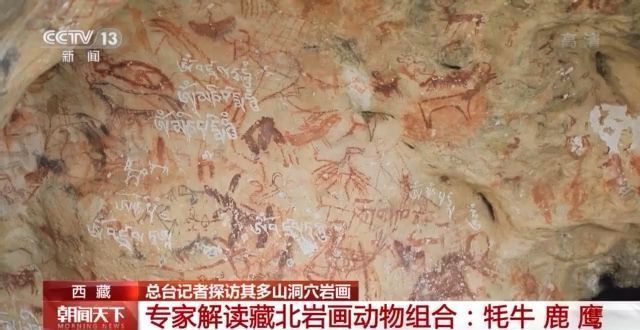 Entering Cave No. 1, there are dazzling petroglyphs on the walls, and there are 302 individual images of yaks, deer, eagles, horses, and hunters. The subject matter is mainly hunting and animal graphics. The yak and male deer in the middle, as well as the hunter with bow and arrow on horseback, are very vivid. 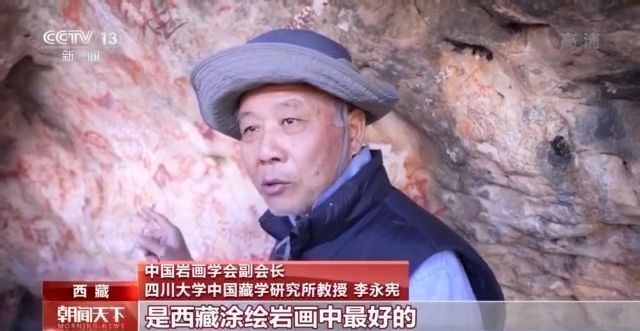 Li Yongxian, Vice President of the Chinese Rock Painting Society, Professor of the Institute of Tibetan Studies of Sichuan University:It reflects hunting, that is, the interaction between humans and animals. Animal portrayal is very vivid. It can be said that at the level of painting, it is the best among Tibetan painted rock paintings. 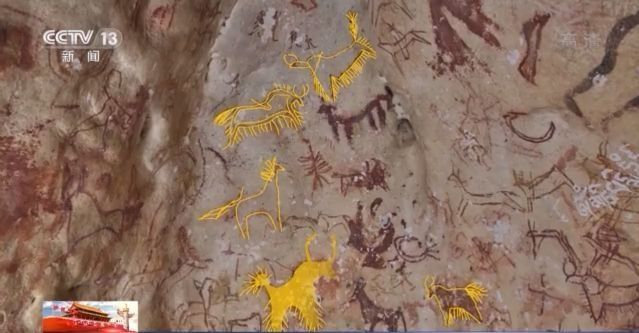 Tibetan petroglyphs are divided into early carved petroglyphs and later painted petroglyphs. Observe carefully, some of these yak painted patterns are silhouette style, some are line drawing style, and some yaks are painted with long hairs, which are unique in style. The yak, deer and eagle are the most frequently seen animal groups in its mountainous rock paintings. 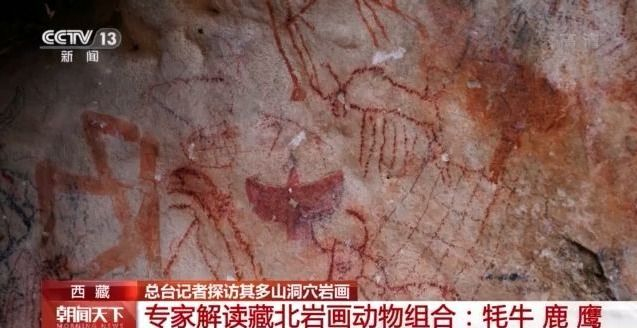 The petroglyphs are pictures that reflect the thoughts of the ancients on the rock caves or on the rocks in the wilderness. At its No. 1 petroglyph site, the eagle’s rich patterns and secret location have attracted the attention of experts. 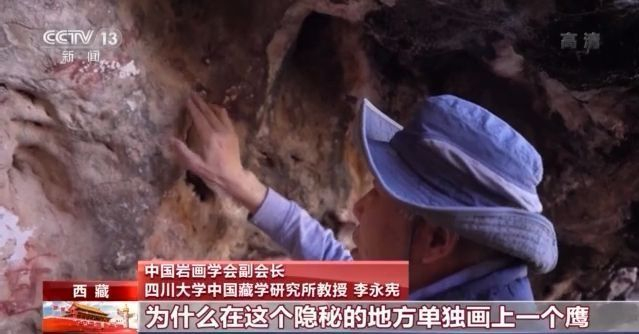 Li Yongxian, Vice President of the Chinese Rock Painting Society, Professor of the Institute of Tibetan Studies of Sichuan University:The high frequency of appearance is the image of an eagle, but this eagle is no longer a pure bird animal. It has a certain human form and is highly symbolic. Why is an eagle drawn alone in this secret place? It has the effect of worship in it. 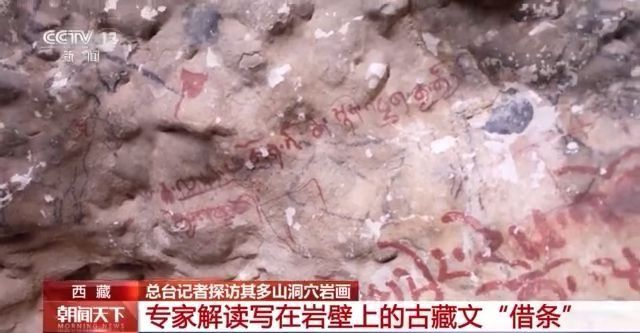 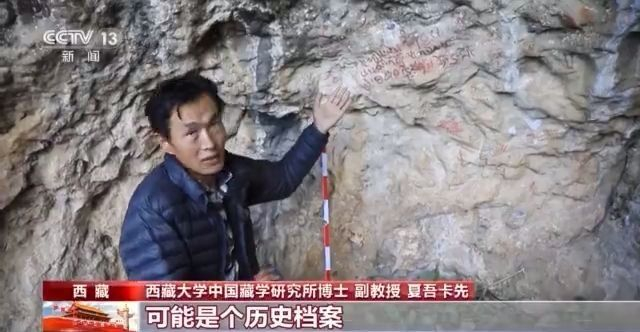 Xia Wukaxian, PhD associate professor at the Institute of Tibetan Studies of Tibet University:It may be a historical archive, because this “zhe color” led a group of five of them, took a hundred taels of gold and went to central Tibet, and then “Abalus” may also be a personal name, and then a group of 50 people, brought a thousand taels of gold. .

Xiawukha said that these ancient Tibetan inscriptions were roughly dating from the 13th century AD to the 15th century AD. 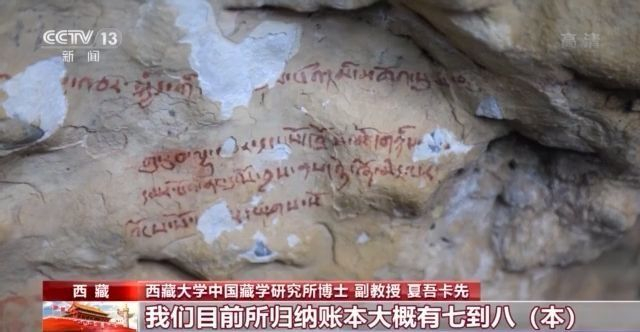 Xia Wukaxian, PhD associate professor at the Institute of Tibetan Studies of Tibet University:There are about seven to eight ledgers we have currently summarized. This early use of the entire cave and even the entire island will provide some more important clues.

According to the latest statistics, more than 100 rock painting sites have been discovered in Tibet. Animals are the main image category, followed by images of people and symbols.

After comprehensively inspecting the mountains around Nam Co, Tashi Island, surrounding stone tool sites, and ancient ruins, experts conducted an in-depth interpretation of the painted rock paintings in Nam Co Cave and made recommendations for their protection.

As the second largest lake in Tibet and the plateau lake with the largest water volume in China, Nam Co covers an area of ​​2020 square kilometers. There are a large number of cave painted rock paintings around it, which have become an important category of Tibetan rock paintings. 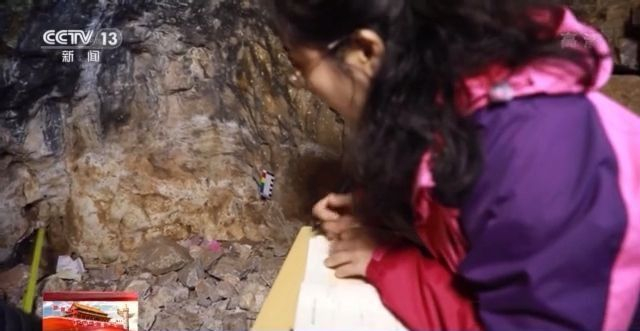 Headquarters reporter Chen Qin:From the lakeshore of Nam Co, I walked to the caves on both sides of it, like a star, very beautiful. It can be said that there is a hole in the cave. They are measuring the size. We saw that this record sheet was written as a record sheet of a field survey of Tibetan rock paintings.

Associate Professor Pang Ying from the School of Arts of Lanzhou University of Finance and Economics has studied Gansu rock paintings for many years. This scientific examination is mainly responsible for drawing and writing.

Pang Ying, Associate Professor, School of Art, Lanzhou University of Finance and Economics:Two methods were used in the investigated caves (rock paintings), one is dry painting, the other is wet painting, and the wet painting is divided into two types, one is thin (painting) painting and the other is thick painting. 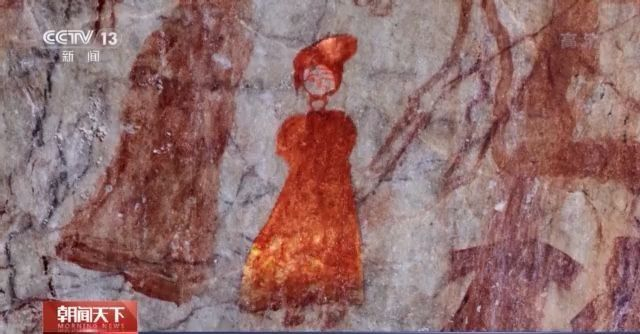 This woman in a long robe wears a tall bun, her face is plump and elegant, and her robe is thick-coated. 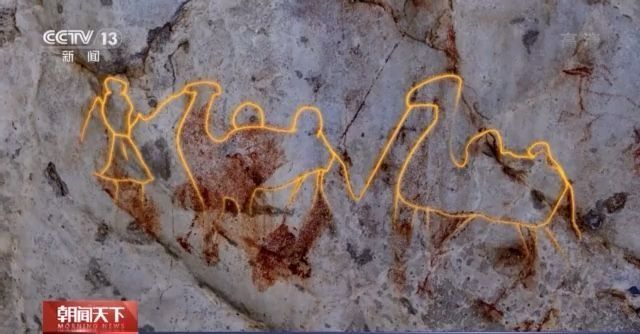 And this man wearing a short tunic and holding two camels uses a line drawing method, and the momentum of the “boat of the desert” jumps on the stone.

The pigments of these petroglyphs are mainly mineral pigments, with animal and plant binders added to them, so where do these pigments come from?

Tang Huisheng, Professor of the Department of Archaeology, School of History and Culture, Hebei Normal University, Director of the International Rock Painting Dating Center:We are now on the north slope of the East Island of Tashi Island, about 4750 meters above sea level. This is ochre, which can be extracted from ochre, which has a relatively high iron content and iron trioxide. 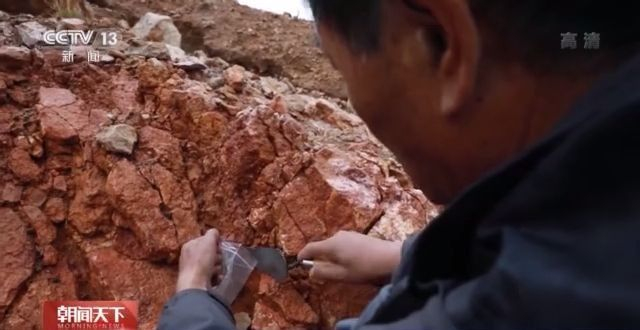 On the mountainside of the eastern tip of Tashi Island, there is a red earth pit. Experts decided to mine the soil and compare it with the paint on the rock paintings. 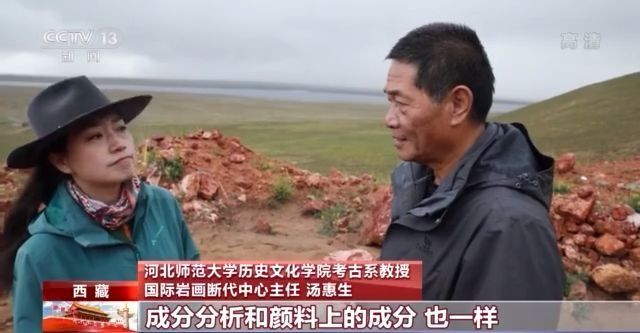 Tang Huisheng, Professor of the Department of Archaeology, School of History and Culture, Hebei Normal University, Director of the International Rock Painting Dating Center:The composition analysis is the same as the composition on the pigment. After diluting with water, it is analyzed with some additives. If they are consistent, it means that they may be picked from here.

How to protect so many exquisite rock paintings with great research value? 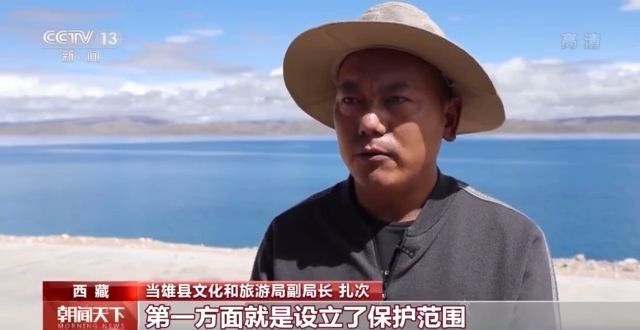 Zhaci, Deputy Director of the Culture and Tourism Bureau of Damxung County:The first aspect is the establishment of protection areas, construction of control zones and protection signs to ensure the safety of rock paintings. The second is that we sent two field guards to conduct daily patrols and care of the petroglyphs. 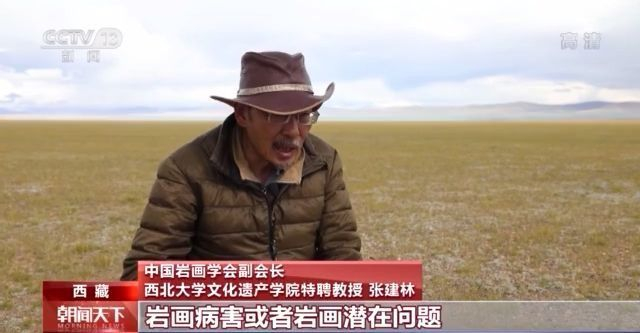 Zhang Jianlin, Vice President of Chinese Rock Painting Society:Don’t cause damage to the rock painting itself, I think this is more important. There is a systematic investigation of rock art diseases or potential problems of rock art. Its geographical location is different, its existence environment is different, its stone quality is different, it is targeted, and it adopts different methods to protect it according to different situations.

Nobel Prize for Medicine, not just caresses. There is also pain

Attacked and wounded in his restaurant in Pertusio,...

On the reform of the land registry –...

The police informed the incident that there were...

The cold wave hits many places in our...