Home News Rumor has it that the missing woman in Henan Province was kidnapped by the police, and her phone was taken away to delete the evidence | Ye Ting | Redress for her father | Lost
News

Rumor has it that the missing woman in Henan Province was kidnapped by the police, and her phone was taken away to delete the evidence | Ye Ting | Redress for her father | Lost

[The Epoch Times, December 07, 2022](Comprehensive report by Epoch Times reporter Zhao Fenghua) Ye Ting, a woman from Qixian County, Kaifeng, Henan, redressed her father’s grievances on Douyin, and released her sister Ye Bingyan’s real name to report that the murderer beat her father to death. Get away with it Video. On December 6, the family posted a missing person notice on the Internet, saying that Ye Ting was forcibly taken away from her home by seven or eight men, and her whereabouts are unknown. “Ye Ting” once appeared on Weibo’s hot search list, with more than 100 million hits, but was quickly suppressed.

(Source: Ye Ting’s Douyin account)
The news of Ye Ting’s disappearance has touched the hearts of netizens at home and abroad! It was rumored that she was arrested by the local police.

According to a video released by the well-known Twitter account “Chinese Tragedy Files” on December 7, Ye Ting was exposed in a family group chat. She was caught by the police and brought to the Public Security Bureau. Write a letter of guarantee and give up rights protection.

She wrote in the family chat group: “They snatched my mobile phone, took the card away and gave me to delete it.” “They didn’t get rid of my Apple phone, they logged into my Douyin by text message, and only knew that Douyin was me sent.”

See also  An increase of 8% year-on-year, the cultural tourism market in Shushan District ushered in the opening of the Spring Festival holiday _hefei Online

Before Ye Ting was kidnapped, she posted a real-name report video of her sister Ye Bingyan on her Douyin account(Click to watch the video). Ye Bingyan, who was 19 years old at the time, released the video for the first time on the anniversary of her father’s death. She said in the video that on June 28, 2021, her 53-year-old father had an argument with someone while dining at a farm banquet in the village and was beaten by a group of people. After the death, the killer has been at large.

On December 6, one year after her father was beaten to death, Ye Ting, who defended Weibo rights, was taken away by several men and lost contact #Ye Bingyan pic.twitter.com/S2DOTzTP9z

Ye Bingyan told the process of the murderer’s attack on her father in tears: “After the murderer beat him in the hotel, he dragged him to the door of the hotel and finally chased him to the asphalt road. The method of violence was cruel and crazy. They walked away until my dad passed out by the side of the road.

“Their beatings happened around 8 o’clock (in the evening), and they were not sent home until my neighbor’s uncle passed by the place where the incident occurred. At 0:29, my dad was too seriously injured and had a severe headache. 120 was sent to the hospital and died. Liu Qingyan, the thug who first had an altercation with my father, is still at large.

“Our mother and daughter dare not go back home, and have been drifting away for more than a year. There is no official in the family. We are really desperate and don’t know what to do.”

According to a partial screenshot of a document exposed by the “Chinese Tragedy Archives”, in a testimony signed by Ye Bingyan, the Banmu Police Station at the scene of the incident was reported for inaction and wrong enforcement procedures.

Ye Bingyan wrote in the report document: “On the evening of June 28, 2021, during the incident, someone called the police, and the Banmu Police Station also dispatched the police, but they did not send my father, Liu Qingyan and others back to the police station to understand the facts. The case was closed, the police went back, and it was over. My father’s death was indirectly related to his inaction… I request that the whole process of the recorder be presented in court and made public.” 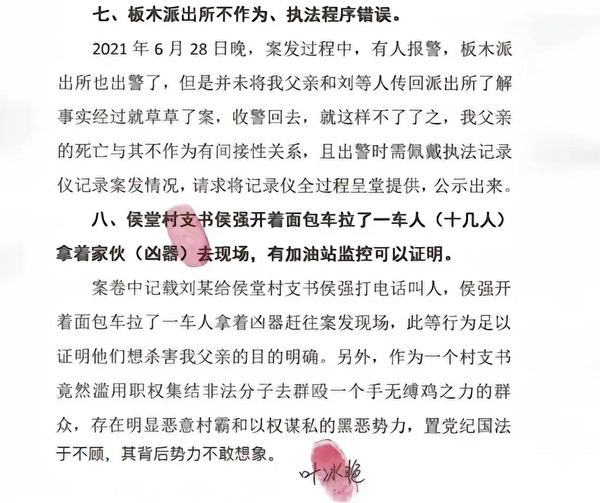 Ye Bingyan also wrote in this report that when the case happened, the suspect Liu “called Hou Qiang, the party secretary of Houtang Village, to call someone. Hou Qiang drove a van and pulled a car full of people to the scene of the crime with murder weapons.” “, “As a village party secretary, he abused his power to gather illegal elements to gang up on a powerless crowd. There are obviously malicious village tyrants and underworld forces who use power for personal gain.”

The incident quickly fermented on the Internet. On December 7, “Ye Ting” was once on the Weibo hot search list, with more than 100 million hits. But it was quickly suppressed from the hot search list, and a large number of related videos were also deleted from Weibo.

See also  Flames and smoke in the tunnel in Pontebba, but it is a fire brigade exercise

The incident aroused attention at home and abroad. According to Lu media reports, under the pressure of public opinion, the staff of the local township government responded that the police station has opened a case for investigation and attaches great importance to it. In this regard, netizens did not buy it. 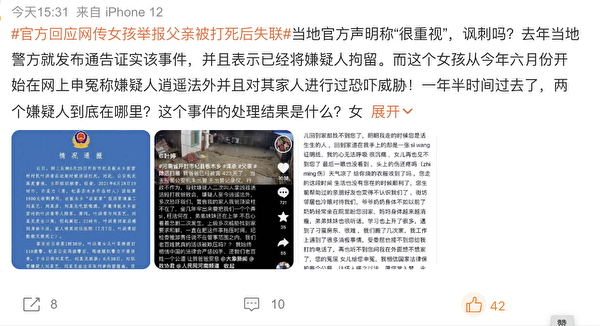 Some netizens also said: “‘Very important’? It’s been a year since the incident happened. If the disappearance of Miss Ye Ting hadn’t become too hot, would you have filed a case for investigation?”

Some netizens are worried about Ye Ting’s situation: “Society ruled by law? This girl is missing. I feel sorry for what happened to her…how helpless she is!”

What happened to Ye Ting’s family has aroused strong public attention. The Epoch Times will continue to monitor developments.

VX project, how Sony wants to decipher the emotions of cinema