[The Epoch Times, July 1, 2022](The Epoch Times reporter Zhao Fenghua comprehensive report) Under the CCP’s zero-epidemic prevention policy, nucleic acid testing has proved that it has become a must for people to travel. However, data released by the Chinese Communist Party’s Health and Health Commission recently showed that in more than ten provinces across the country, 210 nucleic acid testing institutions were unqualified and ordered to rectify, including provincial CDCs and tertiary hospitals. Netizens are shocked!

According to the announcement, from June 6 to 9, 2022, experts from the Hunan Provincial New Coronary Pneumonia (CCP Virus) Epidemic Prevention and Control Headquarters carried out on-site inspections of nucleic acid testing laboratories of 15 medical institutions directly under the ministry and provinces, including 3 medical institutions directly under the commission. Correction required.

(Screenshot of the official website of the Hunan Provincial Health Commission) 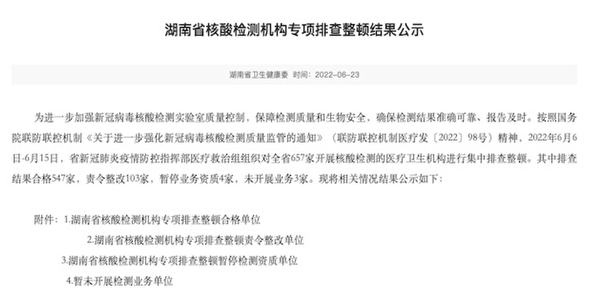 According to reports, among these nucleic acid testing institutions ordered to rectify, most of them have irregular laboratory review records, lack of performance verification of supporting testing systems, relevant SOPs not updated in time, some old equipment, and sample collection, transportation, and storage. , detection operation is not standardized and other issues.

The news was fermented on the Internet, causing heated discussions among netizens. Some netizens exclaimed: Shocking!

Some netizens also called for the cancellation of nucleic acid testing. “Just cancel the nucleic acid, look forward to it!”

There is also an owner of the first phase of Fenghuajingyuan in Minhang District, Shanghai, who posted a group chat record on June 30, reflecting the problems faced in the nucleic acid testing of the community. He hopes that the relevant departments can effectively perform their supervision functions and protect the health and safety of the people. Responsible.

The netizen said: “The third-party agency for nucleic acid testing in Wujing, Minhang, suspected to use non-compliant anti-epidemic products, and refused to accept comments when community volunteers questioned the materials and asked for rectification. I hope the leading department will pay attention to and verify the agency’s performance. Compliance and timely rectification of deficiencies.”

The owner also said in the group chat: “Dear friends: Tomorrow, a third party will find foreign aid to take over the nucleic acid kiosk, because the volunteers in our community found that the materials they distributed did not meet the safety of epidemic prevention, such as the gloves being thin and brittle. , The driver who transported the sample did not wear protective clothing or even a mask. For everyone’s safety, all of our volunteers temporarily withdraw from nucleic acid sampling.

According to the screenshot of the group chat, the netizen’s appeal did not seem to have received a response from the relevant departments, prompting him to decide to withdraw from the nucleic acid testing work, which highlights the difficulty faced by grassroots epidemic prevention personnel to work in accordance with regulations.

Proceeds from road fines are falling: the speed...

History of Renzi and Calenda: the coltelli brothers...

The theme of health and hygiene services will...

Mediaset turns off the repeaters The valleys of...

Elections, the NCC proposal: “Create a Ministry of...