Home News The Central Meteorological Observatory issued another heavy rain at 6 o’clock, and the yellow warning still has 160 mm heavy rain in some areas-News-cnBeta.COM
News

The Central Meteorological Observatory issued another heavy rain at 6 o’clock, and the yellow warning still has 160 mm heavy rain in some areas-News-cnBeta.COM

The weather changes in the past few days have moved people’s hearts. At 6 o’clock this morning, the Central Meteorological Observatory issued another rainstorm warning. Many regions in my country are still facing the risk of heavy rains of 100-160 mm.The Central Meteorological Observatory stated that it is expected that from 08:00 on July 22 to 08:00 on July 23, southwestern Hebei, northwestern Henan, southwestern Guangxi, Leizhou Peninsula of Guangdong, northwestern Hainan Island, southern Yunnan, coastal areas of central and northern Zhejiang, central and northern Taiwan, etc. There were heavy rains in parts of the land.

Among them, there were heavy rainstorms (100-160 mm) in parts of Leizhou Peninsula, northwestern Hainan Island, and northern Taiwan Island. Some of the above areas are accompanied by short-term heavy rainfall (the maximum hourly rainfall is 20-50 mm, and the local area can exceed 70 mm), and there are strong convective weather such as thunderstorms and gales in the local area. 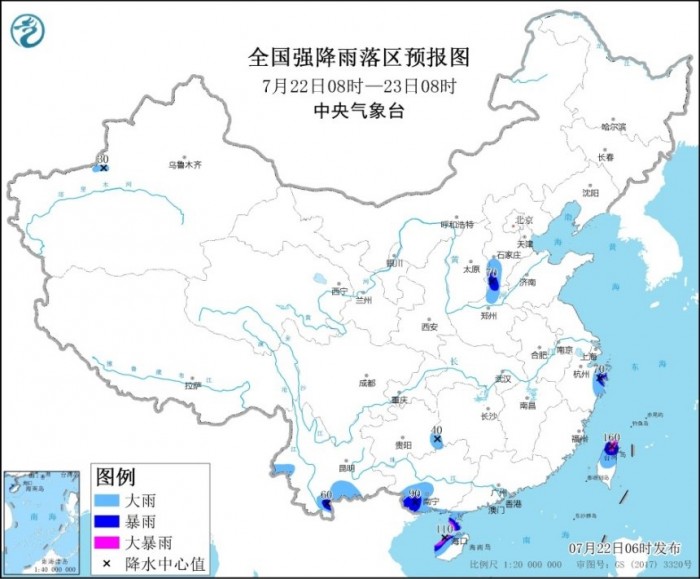 1. It is recommended that the government and relevant departments do a good job of preventing rainstorms in accordance with their duties;

2. Cut off the outdoor power supply in dangerous areas and suspend outdoor operations;

3. Do a good job of drainage of waterlogging in cities and farmland, and take precautions against possible disasters such as mountain floods, landslides, and mudslides.

It is expected that the “firework” will move to the northwest at a speed of 5-10 kilometers per hour, and its intensity will gradually increase, and the strongest can reach the super typhoon level (level 16, 52-55 m/s), Moved to the southeast of the East China Sea around noon on the 23rd, and then turned to the northwest, gradually approaching the coast from the north of Zhejiang to the north of Fujian, and will land on the coast of the above areas from the night of the 24th to the 25th (typhoon-level or strong typhoon-level) , Level 12-14, 35-42 m/s); At present, it is not yet possible to completely rule out the possibility of northward in the sea off Zhejiang.

Gale forecast: From 08:00 on the 22nd to 08:00 on the 23rd, there will be the Taiwan Strait, the Bashi Strait, the ocean east of Taiwan, the East China Sea and the waters near the Diaoyu Islands, the Yangtze River Estuary, Hangzhou Bay, the coast of Zhejiang, the north-central coast of Fujian, and the coast of Taiwan Island. Strong winds of 6-8, among which the winds in the southeastern part of the East China Sea and parts of the ocean east of Taiwan are 9-11, and the winds in the nearby sea or area where the typhoon center passes can reach 12-16, with gusts of 17.

cnBetalatest newsThe Central Meteorological Observatory has another heavy rain at 6 o'clock. A yellow warning is still in place for heavy rains of 160 mm in some areas.
0 comment
0
FacebookTwitterEmail
previous post

New crown pneumonia cases increase in Olympic village, WHO head cheers for the Olympics-IT and Sports

Agile, hybrid and smart: this is how work changes after Covid

After more than 50 years, the Costa Smeralda...

The Central Propaganda Department and the Political Work...

Volpiano, hit the A5 junction in full: three...

“Nazis, we will not be lobotomized by the...

Nanjing people who have been discriminated against and...

The son of Bruno Tabacci hired in Leonardo,...

Strengthen the education of party history and military...

More hail on the vineyards of the Asolano...

Why did Zhangjiajie become the second largest source...