Original title: Hangzhou Xixi Yayuan is temporarily closed for management, and nucleic acid sampling is being carried out for all staff

In the early hours of this morning, some netizens on Weibo continued to post news that “Xixi Yayuan in Wuchang Street is closed for management”. After 7 o’clock, a screenshot of the announcement was also released. From the screenshot, it was released by the Friendship Community of Wuchang Street. The release time was 7:07 on January 14th. According to the announcement, according to the needs of epidemic prevention and control, Xixi Yayuan is currently under temporary closed management and nucleic acid testing for all staff. Please actively cooperate with the staff’s epidemic prevention work, stay at home, and walk as little as possible. The reporter checked and confirmed early: the community has been closed, and all staff are undergoing nucleic acid. The specific situation will be released at that time. Via City Express 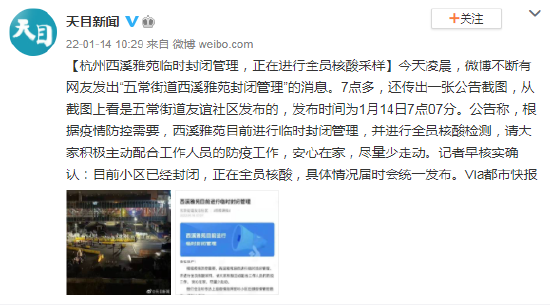 Our city held a practical exercise for the...