Original Title: Going with the “World” to Win the Future Together-Looking at China‘s “WTO” 20 Years from the China International Import Expo

“Since joining the World Trade Organization, China has continued to expand and open up, which has activated the surging spring tide of China‘s development, and has also activated the spring water of the world economy.” In the keynote speech at the opening ceremony of the 4th CIIE, President Xi Jinping described China in this way. Twenty years after China‘s accession to the WTO.

The best memorial to history is to create a new history. With the 20th anniversary as a new starting point, the world will witness a more open China, with a broader mind and a win-win situation with the world.

A wooden mallet and a signature pen were held at the 20th anniversary of China‘s accession to the World Trade Organization at this year’s CIIE. These two exhibits attracted people and brought the audience’s thoughts back to 20 years ago.

This is the South Square of the National Convention and Exhibition Center (Shanghai) (taken on October 31, drone photo). Issued by Xinhua News Agency (photographed by Jiang Zhongcheng)

“China‘s accession to the WTO is a milestone.” said Ma Ke, president of the New Development Bank of the BRICS. Since then, China has more fully integrated into the world economy and achieved a development miracle.

At the National Convention and Exhibition Center (Shanghai), a staff member of an exhibitor (left) who participated in the 4th CIIE Shanghai Investment Roadshow and Pre-show Supply and Demand Matchmaking Meeting in the Consumer Goods Pavilion introduced products to the guests (photographed on July 15).Photo by Xinhua News Agency reporter Fang Zhe

See also  Caluso, Uni3 restarts with a program of courses and conferences

In the past 20 years, China has kept its promises and moved towards a higher level of opening up——

Construction workers set up a booth for a robot company in the exhibition hall of the 4th CIIE (photographed on October 29).Photo by Xinhua News Agency reporter Fang Zhe

Supachai, the former director-general of the WTO, said that China‘s WTO accession commitment is the deepest and most extensive among all members. It not only relaxes market access for goods and services on the original basis, but also reaches a higher level in certain areas.

Today, standing in the CIIE venues, you can feel the tremendous changes that China‘s entry into the WTO has brought to China.

This year is the fourth consecutive year that Unilever has participated in the CIIE, and the exhibition area is the largest ever. “Unilever is one of the first multinational companies to enter the Chinese market, with a cumulative investment of more than 3 billion U.S. dollars in China. China‘s continuous expansion and opening-up measures have strengthened our confidence in the long-term investment and development of the Chinese market.” Unilever Said Zeng Xiwen, president of China‘s public affairs. 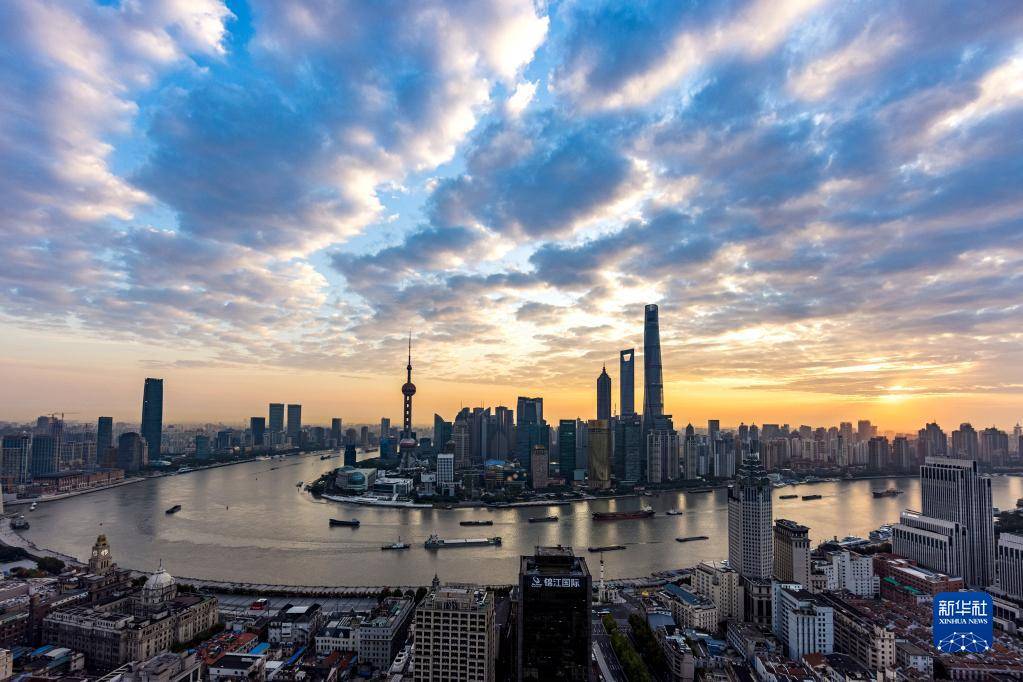 Looking back at 20 years, at the beginning of China‘s WTO accession, it was not without doubts and worries at home and abroad, but China responded with practical actions.

“Integrating into the world economy is the general direction of history. For China’s economy to develop, it must dare to swim in the vast ocean of the world market.” China, which has joined the WTO and has been expanding and opening up, has encountered vortexes and storms in the ocean. But it has continued to grow and develop through wind and rain.

Just after the opening of this CIIE, the US chemical giant Dow has made an appointment in advance to participate in the next session.

“China’s economy is developing in a more sustainable manner, which will bring us more opportunities.” Peng Ruisi, president of Dow’s Asia Pacific region, told reporters, “We will continue to invest in China, deepen China, and develop together with China.” 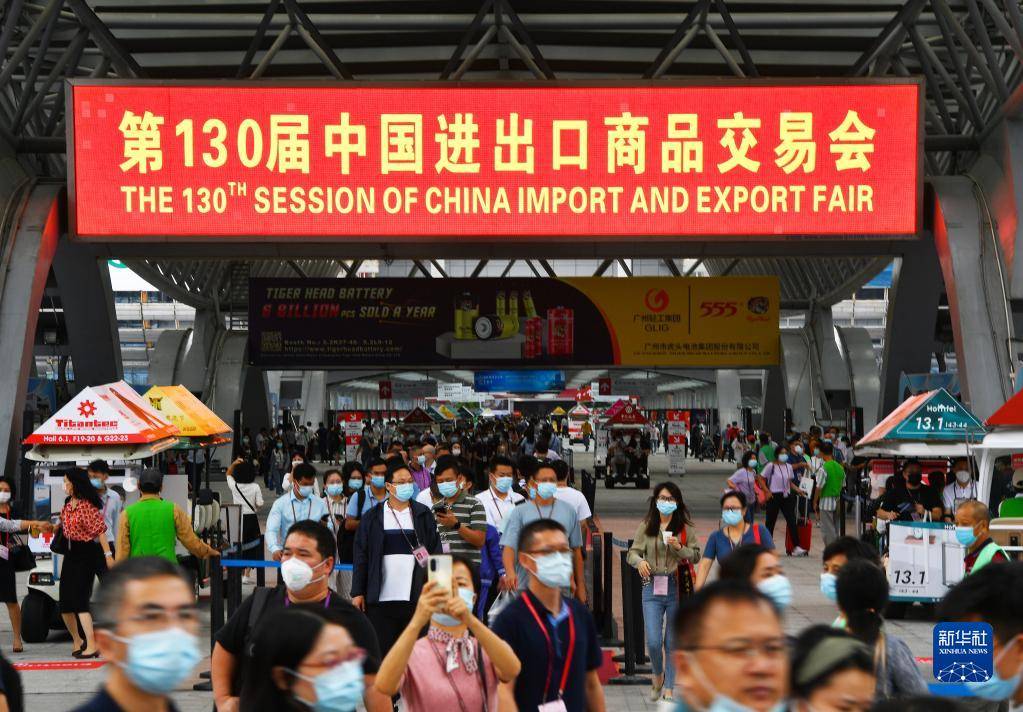 China is developing in opening up, and the world has benefited from China’s opening up.

According to statistics from the National Bureau of Statistics, China’s total economic output accounted for more than 17% of the global economy in the 20 years of its accession to the WTO, and its average annual contribution to global economic growth was about 30%.

How has China’s accession to the WTO affected the world? A set of data may provide an observation perspective: 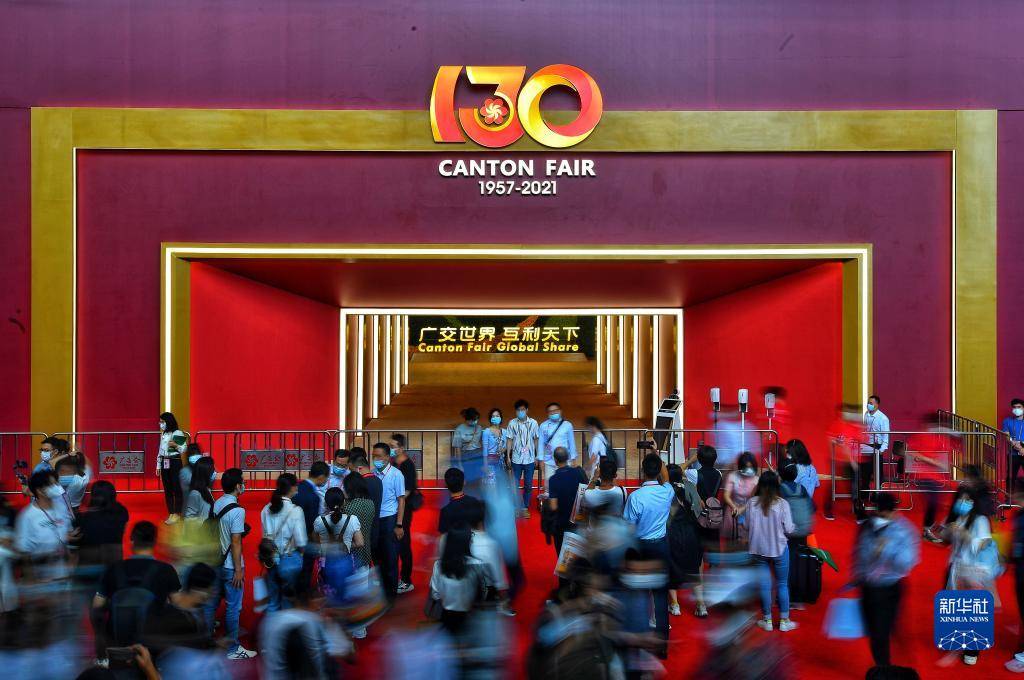 Chinese goods are exported to all parts of the world, and goods from all over the world fly into the homes of ordinary Chinese people-a China with open arms, which not only promotes the optimal allocation of resources in the global industrial chain, but also brings benefits to consumers around the world.

See also  He directed drug trafficking from the Aosta prison: 9 arrests throughout Italy

The head of the delegation of the Latin American envoys to China and the ambassador of Uruguay to China, Fernando Lugris, said in a speech at a sub-forum of the CIIE that Montevideo, the capital of Uruguay, is the country farthest from Beijing in the world. One of the capitals, China’s modernization can have an impact on Uruguay, so the impact on the rest of the world is self-evident. 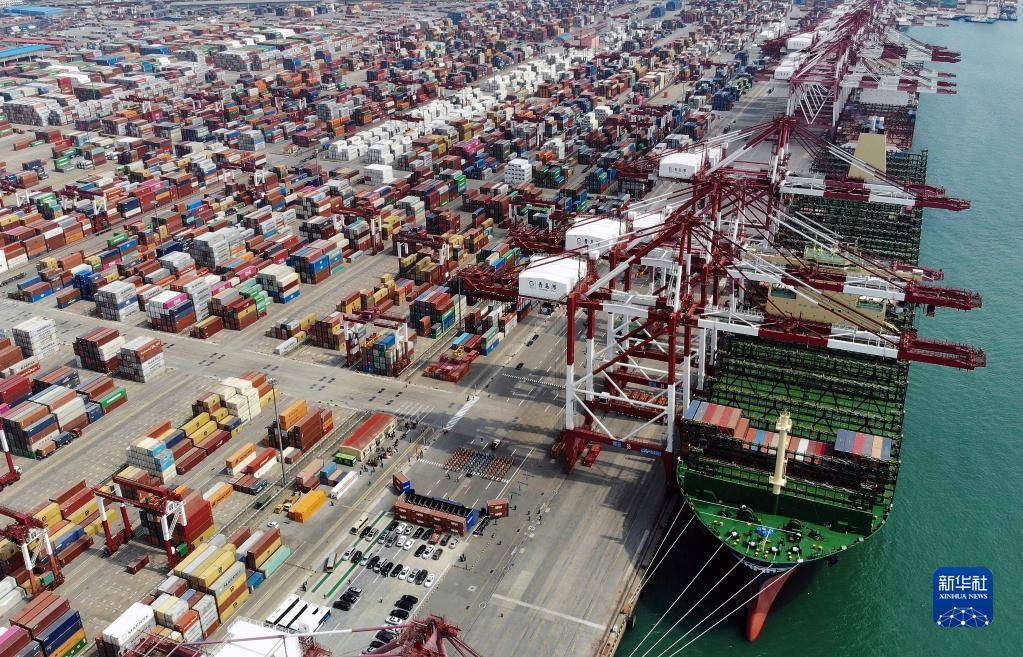 The “Modern Merchant Ship Algeciras” with a carrying capacity of 24,000 TEUs is berthed at the Qianwan Wharf of Qingdao Port (taken on April 26, 2020, UAV photo).Photo by Xinhua News Agency reporter Li Ziheng

Today, the CIIE has become a popular “check-in place” for overseas businesses in China. This year’s CIIE will have nearly 3000 exhibitors from 127 countries and regions appearing at the corporate exhibition, and the number of countries and companies exceeded the previous one. The high enthusiasm of CIIE exhibitors is a testament to China’s sharing of development opportunities with the world.

“Facts have proved that China’s accession to the WTO is taking a road of beauty and mutual benefit,” said Tu Xinquan, dean of the China World Trade Organization Institute of the University of International Business and Economics. 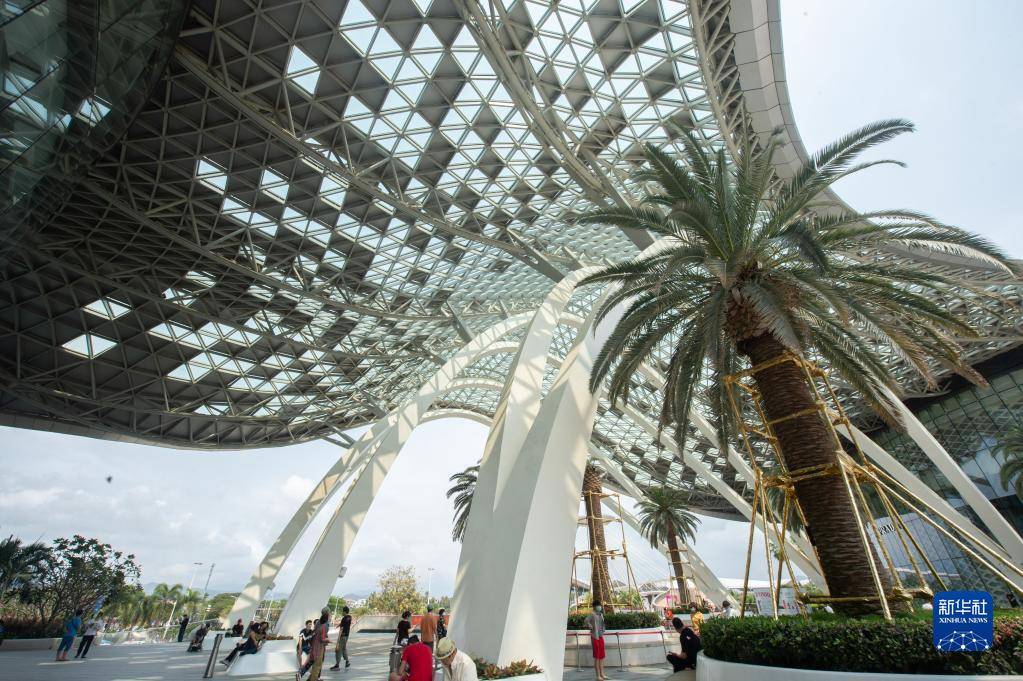 Such a righteous path in the world is getting wider and wider.

The negative list for foreign investment access has been reduced for four consecutive years; the opening up of finance, automobiles and other fields has continued to increase; Hainan has released the country’s first cross-border service trade negative list, which has exceeded China’s commitments when it joined the WTO… China’s opening to the outside world continues to run Out of “acceleration”.

China, which shares opportunities, has become a hot spot for investment in the eyes of foreign businessmen. According to the 2021 business survey of the American Chamber of Commerce in China, nearly two-thirds of its members plan to increase investment in China in 2021. Not long ago, the US-China Business Council issued a report stating that more than 90% of the companies surveyed have maintained profitability in their business in China in the past year, and more than 40% of the companies plan to increase investment in China.

Jin Liqun, President of the Asian Infrastructure Investment Bank, said in an exclusive interview with Xinhua News Agency. The contribution of the world.

Recently, the release of several important news has attracted attention from home and abroad——

On January 1, 2022, the Regional Comprehensive Economic Partnership Agreement (RCEP) will come into effect…

In the context of the ups and downs of the new crown epidemic, the difficult recovery of the world economy, and the intensification of unilateralism and protectionism, China’s series of actions have demonstrated its firm support for the multilateral trading system and free trade.

“The multilateral trading system with the World Trade Organization at its core is the cornerstone of international trade.” “China supports the development of the World Trade Organization reform in the right direction, supports the inclusive development of the multilateral trading system, and supports the legitimate rights and interests of developing members.” At the CIIE, the sonorous and powerful words of President Xi Jinping’s keynote speech sent an important signal to the world.

It firmly supports the multilateral trading system and participates in the improvement of international economic and trade rules. China’s actions are obvious to all–

Put forward China’s positions and propositions centering on WTO reforms; participate in trade policy deliberations and promote increased transparency in the multilateral trading system; actively participate in discussions on new issues of general concern to WTO members such as small, medium and micro enterprises and e-commerce; increase special attention to developing members It is the aid intensity of the least developed country members…

“Without China, the WTO cannot be called a world organization.” WTO Director-General Ivira said that China has not only become more active in the core activities of the WTO, but also helps new WTO members better integrate into multilateral trade. system.

So far, China has signed more than 200 cooperation documents for the joint construction of the “Belt and Road” with 140 countries and 32 international organizations; the AIIB has grown from 57 to 104 at the beginning of its founding, and the “circle of friends” has continued to expand; The China-Europe Express Train, known as the “Steel Camel Team”, has accumulated more than 40,000 trains and has become the “link of fate” for all countries to fight the epidemic together… 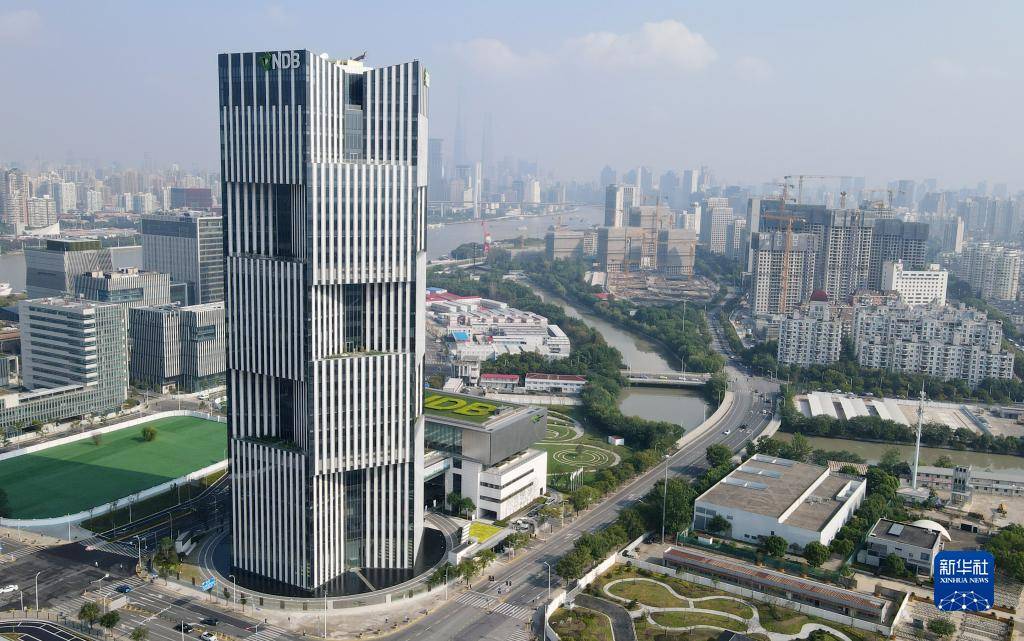 More than a month ago, the permanent headquarters of the BRICS New Development Bank was officially handed over in Shanghai’s Pudong New Area, marking the further “rooting” of this international multilateral financial institution in China.

At this year’s CIIE, 90 companies from 33 least developed countries chose to participate in the exhibition to promote specialty products such as honey and coffee to the Chinese market. China’s CIIE, a global public product, is bringing development opportunities to more underdeveloped countries.

Twenty years ago, China made the right choice in keeping with the historical trend, joined the World Trade Organization, and bravely marched towards the world.

Twenty years later, at a new starting point, China will embrace the world with a more open mind and create a bright future of win-win cooperation with the world. (Reporters Yu Jiaxin, He Xinrong, Liu Hongxia, Pan Jie, Zhou Rui)Return to Sohu to see more

China Consumers Association: Do not be superstitious about the so-called “price advantage” of “Double Eleven”-Market Trends-Market Information Network

Ten Lions with Uruguay Fari on Lazzaroni and Ratuva

Hunan plummeted by 20°C, and the quick-freezing mode...

Early snow this winter is about to appear...

The Guangdong Working Group for the Prevention and...

The rapid growth momentum of the epidemic has...