[Look at China, September 21, 2022]Someone recently issued an accusationBeijing Film AcademyZhao Weixian, a student of the directing department, and Du Yingzhe, the principal of the examination institution of the art departmentsexual harassment. Allegedly,Du YingzheTake the Academy for 15 yearsseduceHundreds of girls. Du Yingzhe refuted this, saying that only his own teaching method is controversial. The Beijing Film Academy said it “has launched an investigation”.
See Chinese websites prohibit the establishment of mirror websites. Return to the genuine Chinese website.

“Shi Ziyi zhucebuliao”, an internet celebrity with 1.468 million followers on Weibo and a student of Beijing Film Academy, posted on September 19. She first said that she had been harassed by Zhao Weixian, who was in the same school, and then broke the news about Zhao Weixian’s art test The teacher, Du Yingzhe, had “10,000 times more serious evil deeds”.

She accused Du Yingzhe of being the principal of the “Shadow Road Platform”, an art examination institution for writing and directing, who had seduced and raped several underage female students for 15 years. “What he has done may be the most serious sexual exploitation in the domestic education sector, the longest duration, the largest number of victims, and the youngest average age of the victims.”

She collected and sorted out 21 victims’ articles against Du Yingzhe, and on September 20, released “21 Art Examination Circles Fang Siqi’s Blood and Tears Complaints”. The article stated that Du Yingzhe would use various means to lure female students, such as asking them to write private stories, openly physically harassing them in class, etc. He would also send them to Thailand to participate in free summer camps, taking advantage of the girls’ isolation and helplessness. Boldly commit obscene acts.

After the public opinion fermented, celebrities and big Vs in the entertainment circle forwarded Shi Ziyi’s news one after another, strongly condemning Du Yingzhe. Among them are actors Li Jiahang and Liu Jiayi, well-known screenwriter Jia Dongyan and Renmin University journalism lecturer Dong Chenyu and others.

Sun Yan, her own sister who is 19 years younger than Sun Li, also revealed that there are many victims on her list, and used three exclamation points at the end of the accompanying sentence to express her anger. She is a Nortel Class of 2020 student. 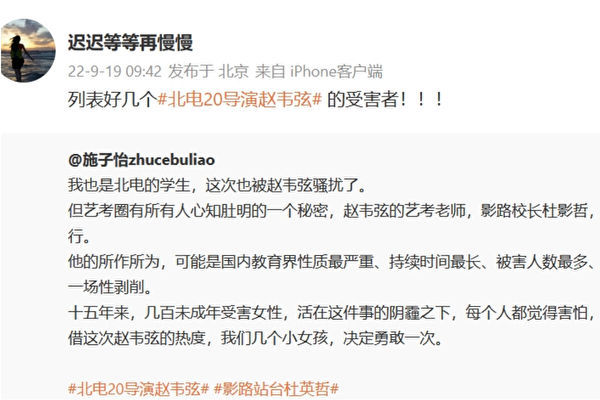 Sun Yan, her own sister who is 19 years younger than Sun Li, also revealed that there are many victims on her list. (Image source: Weibo screenshot)

Some netizens once pointed out with emotion that in the entertainment industry in mainland China, “art exams” seem to have always been inseparable from water depth, bribery, unspoken rules, etc. Although Sun Yan has the protection of her sister Sun Li, her classmates and friends may be helpless under the siege of evil forces and become victims one after another.

However, Du Yingzhe responded with a short text on WeChat on the 20th, saying, “My teaching method in the art test is indeed very controversial, but it is also very effective, because naive and simple candidates cannot compete in the art test. Candidates in the adult world.” He denied involving the above-mentioned related allegations, and said that a “female victim” had called the police, “a false description of the author of the article, Dao Ting Tu.”

At present, the Beijing Film Academy said it “has launched an investigation.” Shi Ziyi said that she had gone to the Public Security Bureau to make a record.

Slurpee and Tycoon Fortress are on your feet! Crocs Teams Up With 7-Eleven To Create The Latest Ride-On Shoes | HYPEBEAST

DR goes shopping: the historic OSCA brand will come back to life

La Zampa.it, the site for those who love...

From the first session of Parliament to office:...

Conegliano, the thieves return to the Conè: second...

L’Aquila, the mayor of FdI finances a festival...

Run over and left on the ground by...

Bonomi: the emergency is energy, we cannot afford...