(Deutsche Welle) As the situation in the Taiwan Strait is tense, the Wall Street Journal exclusively disclosed on Thursday (7th) that more than 20 American troops have been training ground and maritime forces in Taiwan for more than a year. AFP subsequently quoted the US defense Ministry officials said that confirmed the report. Taiwan’s Ministry of National Defense declined to comment on the report.

The Wall Street Journal quoted an unnamed U.S. official as saying that the U.S. special operations forces and a marine contingent had been secretly training the local army in Taiwan, saying that this was part of the strengthening of Taiwan’s defense work because of the defense against China. Concerns about the possibility of aggression continue to increase.

These officials said that the US Marine Corps has been training small ground troops in Taiwan, while the Navy has been training small boats for a year. According to the report, due to Beijing’s military buildup over the past year and recent threats against Taiwan, the US Special Operations Command stated that the Pentagon is concerned about Taiwan’s tactical capabilities.

The report said that White House and Pentagon officials declined to comment on the deployment of American troops. U.S. officials told the Wall Street Journal that this deployment is carried out in rotation, which means that U.S. soldiers will serve on a different schedule.

After a meeting with Yang Jiechi, member of the Political Bureau of the CPC Central Committee and director of the Office of the Central Foreign Affairs Commission, Jake Sullivan, the White House National Security Adviser, received an exclusive interview with the British media BBC. He said when he was asked whether the United States is ready to take military action to defend Taiwan. “We must take action now to try to prevent this day from coming.”

The Chinese Ministry of Foreign Affairs said in a statement that it urges the United States to abide by previous agreements and stop military assistance to Taiwan. It also stated: “China will take all necessary measures to protect its sovereignty and territorial integrity.”

See also  Li Yuming: Why does the Central Commission for Discipline Inspection only care about Wang Leehom but not Zhang Gaoli |

US Department of Defense spokesman John Supple said that in general, US support for Taiwan’s military is measured by its defense needs. He said in a statement: “China has increased intimidation and pressure on Taiwan. The strength of the government includes increasing military activities near Taiwan. We believe this is destabilizing and increasing the risk of misjudgment.” At the same time, he also urged Beijing to “fulfill its commitment to peacefully resolve cross-strait differences.”

President Tsai Ing-wen of Taiwan stated in a speech on Friday (8th) that Taiwan does not seek military confrontation and hopes to coexist with its “neighbors” under the principles of peace, stability, predictability and reciprocity.

Ring time: If the US garrison will attack Taiwan

After the “Wall Street Journal” disclosed the news of the US military stationed in Taiwan, Hu Xijin, the editor-in-chief of the Chinese state media “Global Times”, questioned “Why are there only 24 people? Why are they sneaking?” and said that 240 people should be sent there and they should wear American uniforms generously. And announced the station, “see the People’s Liberation Army will launch air strikes to eliminate those US invaders.”

In August of this year, US Republican Senator John Cornyn said on Twitter that the US had 30,000 troops stationed in Taiwan, and then deleted the tweet. At that time, the “Global Times” stated that if 30,000 US troops were stationed in Taiwan, China would immediately launch a war to liberate Taiwan.

Taiwan’s Defense Minister Qiu Guozheng said that mainland China now has the ability to invade Taiwan, and by 2025 it will have the ability to “invade Taiwan in all its aspects.” He said that the current cross-strait situation can be described as the most severe moment in 40 years.

The “Global Times” editorial stated that “if there are indeed 30,000 US troops stationed in Taiwan, even if the number is less than this number, it is a super serious situation that has broken the bottom line.” The bottom line that can’t be touched.”

The Taiwan Affairs Office of the State Council of China also stated on July 15 that it firmly opposes any form of military collusion between Taiwan and the United States and resolutely safeguards sovereignty and security. , Stop any provocations.”

The “Wall Street Journal” pointed out that China is likely to station US troops in Taiwan in violation of its commitments made in the US’s past agreements. In the 1979 agreement between the United States and China to establish diplomatic relations, they agreed to sever diplomatic relations with Taiwan, terminate a defense agreement, and withdraw troops from the island. The United States later stated that it would reduce arms sales to Taiwan.

US official: Taiwan should be “smart” to invest in national defense

The Wall Street Journal reported that in recent years, the United States has sold billions of dollars in military equipment to Taiwan, but both current and former officials believe that Taiwan must start making more “smart” investments in its national defense.

Matt Pottinger, a visiting scholar at the conservative Hoover Institution at Stanford University, said that around 2015, Taiwan seriously ignored national defense and purchased too many expensive equipment, which would be the first place in the conflict. Time was destroyed, and believed that Taiwan should buy cheap but deadly systems, such as anti-ship missiles, smart mines, and well-trained troops.

In May of this year, Christopher Maier, Assistant Secretary of Special Operations of the Department of Defense, told the Senate Armed Services Committee at a hearing that the United States should vigorously consider deploying such troops to help Taiwan strengthen its capabilities. Meyer served in the Department of Defense during the Trump administration. At that time, he did not disclose that the US special operations forces had been stationed in Taiwan. 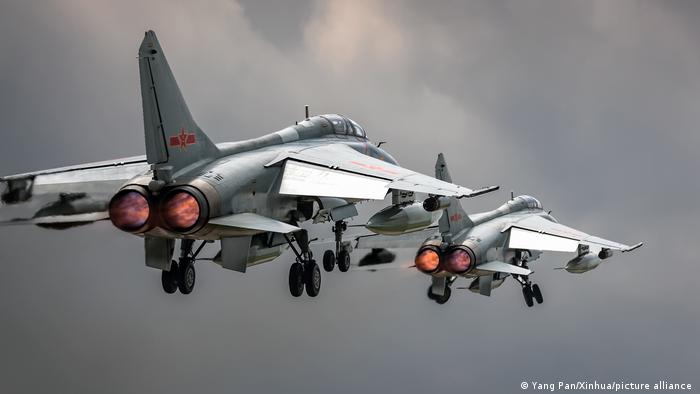 Since October 1, a total of nearly 150 Chinese fighters have entered the Southwest Air Defense Identification Zone of Taiwan. (Information photo)

See also  Cortina, an "eight" in the Bob bar square: in this way the new track will avoid the tennis area

According to U.S. officials, although certain aspects of the deployment of the U.S. military may be classified, such actions are considered politically sensitive due to the tensions between the U.S. and China.

In fact, as early as April 2019, the American Institute in Taiwan (AIT) confirmed that the U.S. government personnel stationed in AIT since 2005 included active military personnel, including the Army, Navy, Air Force, and Marine Corps. Did not mention whether to train Taiwanese soldiers.

The report also stated that during the Trump administration, restrictions on US officials’ contact with the Taiwan government were relaxed, which was praised by Taiwanese officials at the time. The Biden administration has continued a number of Taiwan-friendly initiatives. In April this year, an American delegation was sent to visit Taipei.

The Wall Street Journal stated that before Trump’s departure, the Trump administration declassified the US Indo-Pacific strategic framework. This 10-page document about Taiwan stated that China would take “increasingly tough steps to force Taiwan”. “Unification” and suggested that the United States “enable Taiwan to develop effective asymmetric defense strategies and capabilities, which will help ensure Taiwan’s security, freedom from coercion, and resilience, and it can also engage with China in its own way.”

The strategy also requires that there should be a “combat-powered” US military presence to prevent China from occupying a dominant position in regions including Taiwan. This strategic framework has not been replaced by the new strategy of the Biden administration, nor is it technically capable. implement. However, Biden administration officials admitted that the two administrations have continued their China policy.

© 2021 Deutsche Welle’s copyright notice: All content in this article is protected by copyright law and cannot be used without special authorization from Deutsche Welle. Any misconduct will lead to recovery and criminal prosecution.

Natural gas is soaring. The “energy crisis” and “expensive” winter will come? Can A shares usher in the “Silver Ten”? | Daily Economic News

He steals cheeses from a farm in Motta...