Walking to the Grassroots in the New Year, Dialogue with City Guardians | Wang Fengli: The “Flower of Sanitation” Blooming Beautiful Youth_Nanfang.com

Editor’s note:Saying goodbye to the old and welcoming the new year, thousands of families celebrate reunion with lights. It’s another new year, and there are always some workers who take “Gang” as their home. They shuttle around the streets and alleys, carefully decorating the city, and caring for the harmony of thousands of families. Guangzhou urban management teamed up with Nanfang.com and Yuexue.com to launch a special report on “New Year’s walk to the grassroots and dialogue with urban caregivers”, recording the work of front-line urban management personnel and telling their heart-warming stories of sticking to their posts.

On the eve of the Spring Festival, Wang Fengli was as busy as ever, leading the team to do a good job in the sanitation work of the station and surrounding areas during the Spring Festival travel season, and carefully creating a clean and tidy city environment for citizens and tourists. Every holiday, Wang Fengli often sticks to her job, interpreting the purpose of the people’s urban management for the people with heart-warming services.

Youth is beautiful because of struggle.18Year-old Wang Fengli, with the dream of becoming a female soldier, went south from her hometown in Henan to Guangzhou, but by chance, she became a sanitation worker.33year.Wang FengliincumbentSecretary of the Party Branch and Deputy Director of the Third Cleaning Institute of Urban Management in Tianhe District, Guangzhou，She dedicated her youth to the sanitation cause she loves. She has grown from an ordinary sanitation worker to a team leader, and her heart of caring for the city of Guangzhou has always been the same.

Along the way, she witnessed the earth-shaking changes in the urban environmental sanitation. Looking at the freshness of the neighborhood, she was very emotional: “The beauty of the city has our strength.”

“I was born as a street sweeper! On the day of the interview, Wang Fengli smiled heartily at the reporter.

30Many years ago, there was a young girl in the prime of her life who was looking forward to being bright and beautiful, but she was carrying a broom and rushing around the corners of the city from morning to night. She seemed “out of place” in the crowd.But the stubborn Wang Fengli is determined tothink: “Even if I sweep the streets, I want to make a name for myself!”

She is the youngest member of the team. Fortunately, the seniors in the same team took good care of her. They communicated with each other about business and life, and gradually found a sense of professional identity. Over time, she mastered Cantonese, and found great benefits from it. Belonging.1996In 2010, Wang Fengli was named “Excellent Urban Beautician”.Memories of Wang FengliStanding together to commend the scene, his face was filled with incomparable pride.

She is well versed in “knowledge changes destiny”, insists on studying while working, and constantly enriches herself. From the first-line cleaning staff to becoming the accountant in the office, and then promoted to the management to become the party branch secretary and director of the cleaning office, she has worked hard at every stage of her work. This is true; she has carefully kept many certificates, such as advanced cleaning certificate, clerk certificate, accounting certificate, etc., and her computer, writing, speech and other skills have not been left behind. She has also obtained a bachelor degree, and her management ability and level have been continuously improved.

Facing the compliments from the reporters, she said modestly: “Maybe it’s because I don’t think I’m smart, so I worked hard and honed myself hard when I was young.”

Become the “backbone” and lead the team to overcome difficulties

Relying on her own enterprising efforts, Wang Fengli has grown from a front-line “sweeping the road” to a “manager” of the cleaning station. In the eyes of employees, she is a warm and considerate “intimate elder sister” and a well-deserved “backbone”.

2014In 2010, just as she was in charge of the third cleaning office, she took over the new central axis of Zhujiang New Town and the Olympic Sports Center area; at the beginning, there were a lot of construction sites in these areas, and the roads were covered with garbage and silt, covering an area of ​​more than 100,000 square meters On the Huacheng Square in Beijing, the chewing gum and stains that have accumulated densely over the years are extremely difficult to clean.

she every dayMorning5work at night12I don’t get off work until around 1:00, and work is close20For hours, I shoveled mud, picked up garbage, cleaned up chewing gum with my colleagues, stayed up all night with water trucks, fought on the front line of the road, and persisted2For more than a month, the dirty and messy Zhujiang New City has been transformed into a new look.

Innovating cleaning work with the spirit of “craftsmanship”, Wang Fengli led the team to explore a set of valuable work experience, and implemented the road standards of “seeing the true nature of the road”, “five nos and five cleans” and “artisan spirit”, and replaced the original single manual cleaning operation. The process is transformed into seven cleaning processes of “sweeping, washing, flushing, blowing, grinding, wiping, and digging”, and the human-machine combination mode is promoted，The first to use “high-pressure cleaning and grinding machine” to clean the road surface。

Chewing gum stuck on the roadIt is difficult to clean it with tools such as shovels, so Wang Lifeng alsospecially configuredchewing gumdetergent. “I remember that in order to find a suitable cleaning agent, we contacted many manufacturers and searched around.10Several kinds, and finally overcome the chewing gum problem. “Wang Fengli told reporters that at the beginning, everyone was twisted together, no matter how difficult they encountered, they were not discouraged.

Wang Fengli always leads the team to “charge ahead”. 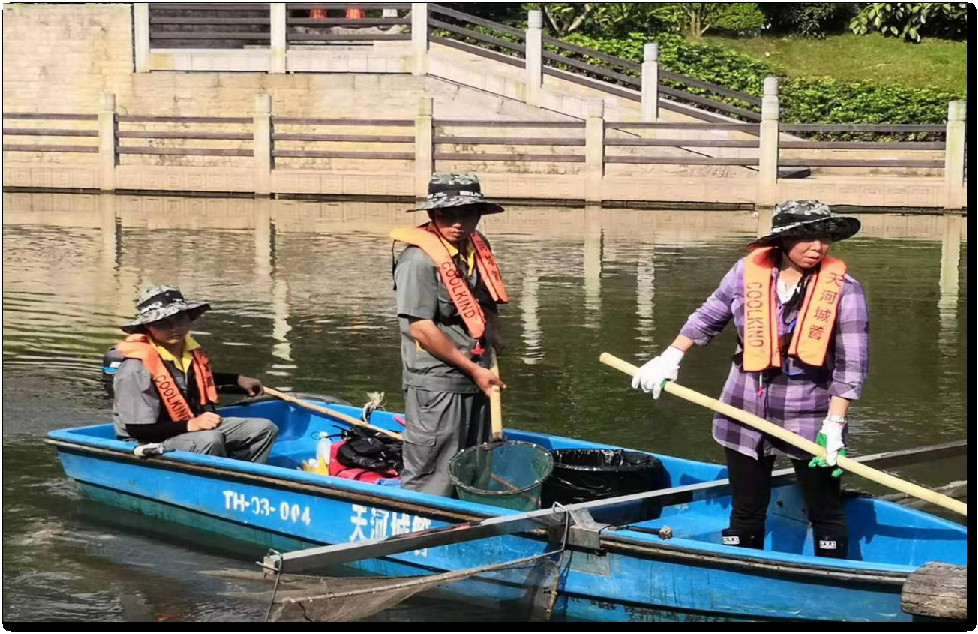 2017year10Since the beginning of the month, Tianhe District has launched a comprehensive battle for river regulation.In order to complete the treatment of black and smelly rivers, as a party member, she entered the boat and took the lead in proposing the concept of “washing the river”. , river wall washing, and river bank blocking” one river, one policy, insisted on carpet cleaning and remediation of rivers, and made three black and smelly rivers pass the inspection and acceptance of the Ministry of Environmental Protection and the Ministry of Housing and Urban-Rural Development in a short period of time，Successfully completed Tianhe District78Kilometer River Chung cleaning took over the task. It took more than two years to control the river surge,sheLeading the team to fish out hundreds of thousands of tons of river garbage, the whole district27A black and smelly river flows in2019In 2019, all the projects passed the acceptance inspection. Chepiyong in Tianhe District was listed as one of the first ten honor rolls for river regulation in the country, and was selected as a typical case of water regulation in the country.

3manyOver the past few years, Wang Fengli has devoted the best time of her life to her beloved environmental sanitation cause.every timeHolidaysDay is the busiest time for sanitation work. She often gives up the opportunity to reunite with her family and sticks to her post.

exist1997Year,Wang FengliHonorably joined the Communist Party of China。“The party and the government have trained me to be an excellent party member and given me spiritual support. I will lead the team well and give back to the government and society.” Wang Fengli said firmly.

2020At the beginning of the year, the sudden outbreak of the new crown pneumonia brought a huge test to the sanitation work.Wang Fengli actively participates in the front line of prevention and control, and sticks to the retrograde50For many days, the “Party Party Commando Team”, “High Pressure Cleaning Team”, “Disinfection Commando Team” and “Women’s Cleaning Team” were formed, and the team led the team to stick to their posts without hesitation, and worked on the road every day, increasing from four times to eight times.

in the placeThe lack of epidemic prevention materials, sheAt onceleadstaffMany trips to Baiyun, Panyu, etc.to buy2thousands of masks,3million pairs of gloves,100Protective equipment such as a thermos bottle to protect the life, health and safety of employees. She also stayed up all night to write the “Epidemic Prevention Rhythm of the Third Environmental Sanitation Institute” to urge the workers to do enough self-protection.

Participate in the front line of anti-epidemic

“me as theirbig sister，big sisterHere, they are at ease in their hearts”, she said in an interview, the reason why she insistedandstafffight togetherI want to give everyone a “reassurance pill”，Let them work with peace of mind。

From the blooming season of youth to mature middle age, Wang FengKoreawitnessed the city’sbeautiful butterfly change;She is becoming more and more determined，Use your hard work and wisdom to dress up the beautiful Yangcheng。

Wang FengliOnceIn a speech, he shared: “We are all ordinary people and cannot change the length of life, but our profession can change the thickness of life. To be a city beautician and dedicate our youth and strength to the cleanliness of Guangzhou, this is This is our original intention and mission.”

New York collector sues Guggenheim for 200 million: “That Picasso is mine”

Community mothers will remain unemployed until their requests...

The 4th Plenary Session of the 14th Jiangmen...

Strike of taxi drivers in Yopal ended, they...

Many places: The price of measurable new crown...

Jackson Martínez without a team, the DIM told...

Community and busy mothers of Cesar join the...

América de Cali manifested itself before the accident...