Home News Why did the tragedy of a woman in Wuhan “take life accusation” about walking the dog without leashing the rope? |Wuhan City|Property_Sina News
News

Why did the tragedy of a woman in Wuhan “take life accusation” about walking the dog without leashing the rope? |Wuhan City|Property_Sina News

Original title: Wuhan woman “accused her life” for walking her dog without a leash, what caused the tragedy?

If it constitutes the crime of quarreling and provoking trouble, criminal responsibility can be investigated

On November 19, on the seventh day of Lu Xiaolin’s fall, hundreds of owners in the community spread flowers on the grass to mourn. She is a party to the Wuhan “accusation of walking the dog without leashing the rope” incident in Wuhan.

Two recent events related to dogs have aroused strong public concern. One is the “dog biting an old man” incident in Anyang, Henan, and the other is this “life accusation” tragedy.

The 36-year-old Lu Xiaolin has always been afraid of dogs, even small dogs. She was bitten by a dog when she was a child. The cause of the incident was that an owner walked his dog without a leash, and Lu Xiaolin had a grievance with the other party. According to the family’s knowledge, in the following two months, the two sides clashed many times.

Lu Xiaolin’s father, Lu Qixiong, told China News Weekly that they reported to the police immediately after the incident, but the police did not file the case on four reports due to the exclusion of criminal cases. On November 23, the family learned that the police had accepted the case for the crime of creating quarrels and provoking troubles, but they have not yet determined whether to open the case. Prior to this, Lu Xiaolin had repeatedly reported to the owner group that he was surrounded and insulted by the dog owner but did not attract the attention of the property owner.

A lawyer told China News Weekly that publicly insulting others and allowing pets to affect others’ lives are all suspected of constituting criminal offences.

On November 13th, Lu Qixiong, who was far away in Jingzhou’s hometown, received a call. The phone only said that something happened to Lu Xiaolin, so he and his wife hurried to Wuhan. He also said that Lu Xiaolin missed her sister very much and asked her to join her. past.

Lu Qixiong was very nervous when he received the call. Because just two days ago, Lu Xiaolin’s mother had just returned from her daughter’s house. At the time, her daughter’s life didn’t seem unusual.

When Lu Qixiong and the others arrived at their daughter’s home, they had already been sent to the funeral home. After the incident, Lu Xiaolin’s family members learned some clues from some records left by her mobile phone.

The above record shows that Lu Xiaolin was pounced on the sidewalk of the community by a small dog without a leash on his way to work. Later, Lu Xiaolin picked up the branch and drove the dog away, but then had some quarrels with its owner.

From September 16, Lu Xiaolin began to report to the property steward of the community the problem of walking the dog without leash in the community.

However, the situation did not calm down, but further escalated.

The day before the incident, Lu Xiaolin posted a number of messages in the community group. In the grid group of the community, Lu Xiaolin complained that an old lady who was in conflict with the above-mentioned conflict had gathered several old ladies who raised dogs and blocked her and provoke her on the way to work every day. “So I went back and prepared to beat the dog with the newly bought dog-snatching stick. They beat me a few times with the stick.”

Lu Xiaolin said that she had looked for the property many times, but she did not give other effective feedback except for asking her to call the police.

A woman who claimed to be the owner of the dog’s wife responded to the dispute in the owner’s group, saying, “My puppy has been raised for 8 years, and there has never been any discord between humans and dogs. If one of them is kissed someday, then she It’s definitely not a human being, it’s a kind of my dog.”

On the same day, Lu Xiaolin spoke in the group, saying, “I must take my life to sue.” After being dissuaded, she said, “No, it’s worth it. I want to let the community no longer walk or leash dogs.” 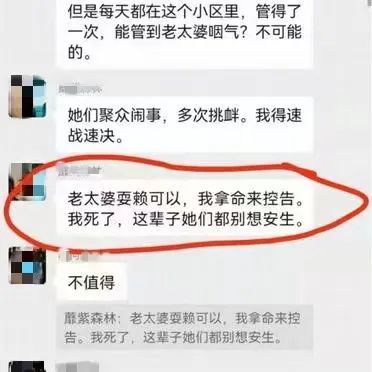 In the early morning of November 13, after leaving a suicide note and making some arrangements for his favorite items, Lu Xiaolin walked out of his home on the 4th floor and came to the rooftop on the 32nd floor.

“It was a Teddy. Our community has better greening and many people have dogs,” Zhang Li (a pseudonym), the owner of the community, introduced to China News Weekly. According to data from multiple real estate websites, the community involved is a large community with about 30 buildings and more than 2,000 households. After the incident, some owners also stated that they were forced to take their children around the garage for a year because of a conflict with the owner of a pet dog who was not leash.

Zhang Li said that at 7 o’clock that day, Lu Xiaolin, who fell dead, was discovered by the owners walking in the community. After the incident, his family members wanted to view the video on the property, but they were rejected, saying that they needed the owner to sign for support. Hundreds of owners went to the scene that day.

See also  Omicron advances in the world: what we know so far in 10 questions and answers

Lu Qixiong introduced to China News Weekly that the surveillance only recorded images in the residential entrance hall, elevator room, and gate of the residential complex. The sidewalk where the two sides collided was a blind spot for surveillance. But while monitoring the elevator, he saw the owner of the suspected dog holding a stick. After the incident, the owner of the above-mentioned dog did not contact them.

On November 19, Lu Xiaolin’s first seven days, hundreds of owners spontaneously laid flowers on the grass in the community to mourn.

“My daughter may be emotionally collapsed because of being surrounded and abused for a long time,” Lu Qixiong said. On the day of the incident, they reported to the Lion Mountain Police Station in Hongshan District and took notes at the police station, but they did not register the case four times. On November 23, they learned that the police station had accepted the case for the crime of creating disturbances.

Lu Qixiong told China News Weekly that he had never heard of his daughter suffering from “depression” or other mental illness. In his opinion, his daughter is a very capable person who works in a good company in Wuhan and is also a volunteer of a local Red Cross Society.

“Life is only once. I think everyone cherishes it very much. Who is not so disappointed to have the courage to choose to leave?” Lu Xiaolin’s sister said that her younger sister loves traveling, just like many girls.

“When you encounter panic and humiliation every day, bullying is not only campus bullying.” Lu Qixiong said on social platforms that family members’ demands are simple. They also respect the right to life of dogs, but hope to eliminate uncivilized dog raising and other things. Uncivilized phenomenon, reduce bullying, “will insist on asking for an argument.”

Lawyer: or suspected of a criminal offence

Is it illegal to walk a small dog without a leash? What can I do if I meet a dog breeder who doesn’t leash? The “Animal Epidemic Prevention Law of the People’s Republic of China”, which was newly implemented in May this year, stipulates that units and individuals who bring dogs out of the house shall wear dog tags and take dog leashes as required. A similar description is found in the regulations of the place where the case occurred.

Zhao Liangshan, a senior partner of Shaanxi Hengda Law Firm and a well-known public interest lawyer, introduced to China News Weekly that according to the above regulations, even small aggressive dogs need to be chained. If they violate the regulations, they should be warned according to the regulations. Or fine, “If the dog is instructed by the owner or attacks others without reason, others have the right to defend the dog based on legitimate defense, because the dog itself is aggressive and dangerous.”

Lu Xiaolin’s family believed that for several months, he was surrounded and beaten by many people, chased in insults in public groups, and there were no complaints from multiple parties. There were problems of dereliction of duty and poor management of the property.

Regarding the above situation, China News Weekly tried to contact the property manager of the above-mentioned community, but the phone number could not be reached.

A number of residential property companies introduced to China News Weekly that for uncivilized dog-raising in the community, the property will promptly stop and advise when it sees it, but because it does not have law enforcement powers, the property owner does not restrict residents who refuse to obey. force.

Zhao Liangshan told China News Weekly that the property is responsible for the management of the community. If it is discovered that the owner has not taken safety measures for the dogs, it should be stopped in time, or dissuaded, or taken to the police to maintain the safety of the community, and it must be inaction or cold treatment. The absence of law enforcement power cannot be used as an excuse, so the property is at fault in this regard and should bear the legal responsibility corresponding to the fault.

“If the owner involved in the case repeatedly used verbal attacks and threats, and insulted the victim in multiple owner groups (such as the same kind of dog), which caused the victim to be unbearable and eventually lead to evil results, he is suspected of insulting. “Zhao Liangshan said that in accordance with the relevant provisions of the Criminal Law, criminal private prosecutions can be filed to pursue criminal responsibility.

Zhao Liangshan said that at the same time, if the owner indulges or deliberately indulges his pet to chase and intercept others in public places, affect the normal life of others, or cause disturbances, he is suspected of provoking troubles. If investigated by the police, combined with the actual situation, it constitutes Anyone who commits the crime of creating disturbances may be investigated for criminal responsibility. If it constitutes both the crime of insult and the crime of creating quarrels, the crimes may be punished concurrently.

Fourth wave of COVID and ECB decisions: this is what Europe risks and consequences on the markets in the short term

Cansiglio and Grappa, families with children trapped in...

He has the Green pass, but he forgets...

The two-man bob on the track and on...

Justice, Cartabia: the reform of the CSM is...

Usa: storm on the right deputy, children with...

Strong snow and cold air in northern and...

Beat for commuters, cut off the morning trains...

Reform and opening up is a great awakening...