Xinmin Evening News (Reporter Jin Zhigang) The reporter learned from China Railway Shanghai Bureau Group Co., Ltd. that as of October 8, the 11-day National Day Golden Week Railway Transport has come to an end. The Yangtze River Delta Railway sent 26 million passengers, reaching 26.62 million, accounting for about 22.6% of the national railway passenger volume, with an average of 2.42 million passengers per day, an increase of 0.4% over the same period last year.

The passenger flow continues to maintain a high level of operation. The transportation period for this year’s National Day Golden Week is from September 28 to October 8. For 10 consecutive days since September 29, the Yangtze River Delta Railway has sent more than 2 million passengers a day, of which 3.325 million passengers were sent on October 1, a year-on-year increase of 7.3%, setting a record for a single day after the May 1st holiday this year. The volume of hair is new high. Affected by the weather and the rebound of the local epidemic, the passenger flow of the Yangtze River Delta Railway is mainly concentrated in one city and three provinces, of which the tourist flow is mainly local travel and surrounding travel. Data show that during the National Day Golden Week transportation period, short-distance pipeline passengers sent 21.81 million passengers, an increase of 1.5% year-on-year; long-distance direct passengers sent 4.81 million passengers, a year-on-year decrease of 4.3%.

The prevention and control of the station-train epidemic has been implemented in detail. Strictly implement the local prevention and control requirements, strengthen the temperature detection of passengers entering and leaving the station, cooperate with the local government to check the health code and itinerary code, remind passengers to wear masks throughout the process of waiting for the bus; guide passengers to use facial recognition verification, automatic ticket vending machines, etc. Contact services, minimize personnel contact and gathering; normalize the ventilation, cleaning and disinfection of service places such as waiting halls and passenger train carriages, and keep public places with suitable temperature, fresh air, and clean environment; strengthen elevator handrails, door handles, and inbound stations Key parts such as turnstiles, security inspection equipment, toilets and other key parts are disinfected frequently to provide passengers with a healthy and assured travel environment. During the National Day Golden Week transportation period, the number of passengers entering and exiting the station had more than 50 million temperature measurements. 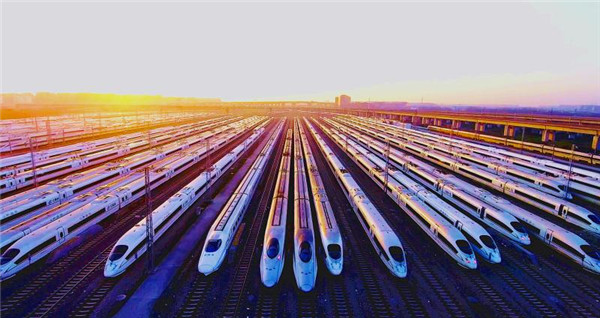 Caption: Photo by Pan Xiaofan at the Shanghai Hongqiao EMU

The supply of passenger transport capacity is accurate and effective. During the National Day Golden Week transportation period, the peak train operation chart was implemented, and the average daily passenger train operation exceeded 1,200 pairs, a year-on-year increase of 9.7%. According to the needs of passenger flow, timely adjust the train operation plan, accurately implement the “one map per day”, and expand the scale of operation in the direction of full passenger flow; strengthen the real-time analysis of waiting ticket purchases, and increase the transportation capacity in the same direction in a timely manner for trains with large waiting numbers and low redemption rates. Efforts to improve the matching degree of passenger flow and capacity. Through measures such as reconnection of EMUs, operation of night EMUs, and additional vehicles on regular-speed trains, the capacity has been effectively increased. During the National Day Golden Week transportation period, a total of 1,711 passenger trains were opened, 2,578 EMU trains were organized to reconnect, and 1,725 ​​regular-speed train vehicles were added. The train operation plan is more scientific, and the quality and efficiency of transport capacity supply have been further improved.

The travel experience of passengers continues to improve. Deepen the operation of the road-ground coordination and linkage mechanism, do a good job in the communication and connection of information between the station and the municipal transportation, coordinate the extension of the operation time of subways, buses, etc., and arrange the encrypted operation frequency, etc., to ensure the timely evacuation of arriving passengers. Optimize the flow of passengers entering and leaving the station on peak days to prevent crowds from congesting and keeping the passages unblocked. At the same time, through a combination of online and offline methods, it provides compassionate assistance services for key passengers such as the elderly, the weak, sick, and pregnant. Manual ticketing windows will be opened in due course, manual channels will be reserved, and tickets will be purchased in cash to provide convenience for the elderly and people who are offline. “Party member assault teams” and “youth volunteer teams” were formed to help passengers in need transfer and carry luggage at stations and trains. Continue to create a “bowl of good rice”, and provide local special Internet hot chain catering services, such as Nanjing salted duck, Yangzhou “Yechun” lion head, Quzhou “three heads and one palm”, Qiandao Lake organic fish head soup and other local hot chains The set meal pits on the train, which further enriches the dining needs of passengers.

Railway red tourism continues to heat up. Red tourist attractions in Shanghai, Zhejiang, Jiangsu, Anhui and other places have attracted many tourists to check in. Through the red tour, the masses of people relive the red memories, visit the revolutionary sites, listen to the red stories, and feel the feelings of home and country during travel. In the railway stations of red tourist cities such as Huai’an East, Yancheng, Xuzhou East, Hefei South, and Jinzhai, the tourist flow has increased significantly compared with the past. Among them, the passenger flow of Huai’an East Station increased by 307% year-on-year, and the passenger flow of Yancheng Station increased by 47.3% year-on-year. On September 28, the Y701/Y702 red tourist train from Shanghai to Jiaxing “Nanhu 1921” was upgraded and upgraded to celebrate the National Day. The micro-classes entered the carriages and the number of red check-in points in the car increased. Passengers from Shanghai, Suzhou, Hangzhou, Nanjing and other places were admired. Come ride. During the National Day Golden Week, the tourist train sent 2781 passengers and became a flowing landscape that spreads the red culture in Shanghai and Jiaxing.

See also  Rutelli: "Museums will be destined for epochal transformations"

Paris, who died aged 88 Banisadr: he was the first Iranian president after the Islamic revolution

An ambitious plan for the land of Gyeonggi-Observation...

Citizenship income, in Fvg the requests are 8,500

Grain Days talks about the revitalization of Liang’an...

Vail winks at the Ampezzo basin. A valuable...

A dozen US missionaries kidnapped by a gang...