At 22:30 on the evening of November 20th, Beijing time, in the 12th round of the Bundesliga, Dortmund played against Stuttgart at home. In the first half, neither side scored, and Dortmund 0-0 Stuttgart in the half. In the second half, Mullen went to the next city. Massimo scored to help Stuttgart equalize the score. Royce made a lore before the final. Overcome the opponent 2-1 at home.

Dortmund’s performance in the international competition days before and after the ups and downs, in addition to the Champions League miss, the team also lost to the Leipzig Red Bull, but their current league record is fair, only 4 points behind the top Bayern in the league standings second place. Stuttgart’s recent performance is similarly poor, and the Hornet will also strive to win this game. The two sides announced that Royce led the frontcourt, Harland was injured but still missed the big list, and two Japanese players from Stuttgart played.

In the 17th minute, Dortmund had the opportunity to set the ball in the frontcourt. Guerrero and his teammates made a little cooperation and directly kicked the ball to the goal. The ball was a little higher. In the 26th minute, Mullen made a cross from the left in the penalty area. The Stuttgart player suspected a handball in the penalty area, but the referee did not say. In the 34th minute, Royce fell to the ground after colliding with his opponent near the penalty zone line, but the referee still did not say.

In the 37th minute, Hazard took the ball from the left side of the front court, and after two steps forward, he took a long shot and the ball was also higher. In the 38th minute, Stuttgart counterattacked. Coulibaly received a pass from his teammate to face Kobel’s goal and was blocked. In the 45th minute, Royce got the ball from outside the penalty area and hit the goal directly, the ball missed a lot.

At the beginning of the second half, in the 49th minute, Dortmund took a free kick at the top of the arc. In the 53rd minute, Dortmund had an opportunity to set the ball on the left front, Guerrero drove out to the penalty area, and Hummels’ header was higher.

In the 56th minute, Dortmund scored! Dortmund passed the ball continuously in the frontcourt. Mullen received Guerrero’s pass from outside the penalty area and hit the ground unexpectedly. The ball rolled into the net. Dortmund led Stuttgart 1-0!

In the 63rd minute, Stuttgart equalized the score! Carrazzo sent a through pass, Massimo got the ball outside the penalty area to face Hummels’ defense and passed it, and then broke through the goal guarded by Kobel, and the score came to 1-1!

In the 66th minute, Dortmund almost broke the goal again. Akanji’s direct long shot outside the penalty area was held by the goalkeeper, and the ball hit the crossbar and bounced back into the field. In the 68th minute, Yoki Ito also hit the goal outside the penalty area, but it did not pose a threat. In the 80th minute, Hazard made a cross from the left. After Mullen got the ball, his low shot facing the double-team defense was slightly wide.

In the 85th minute, Dort scored again! For a counterattack opportunity, Royce and Hazard pushed forward quickly, the latter’s hit was saved by the goalkeeper, Royce followed up with a supplementary shot, and the lore! Dortmund leads Stuttgart 2-1.

In the 88th minute, Stuttgart had a left corner kick and the ball was cleared not far away. Sosa’s shot was slightly higher. In 4 minutes of stoppage time in the second half, Stuttgart did not pose a threat to Dortmund’s goal.

In the end, Dortmund beat Stuttgart 2-1 at home.

The lineup of both sides:

See also  Panathlon blows out 60 candles: "Brotherhood and fair play are the priorities"

Technical statistics of both parties: 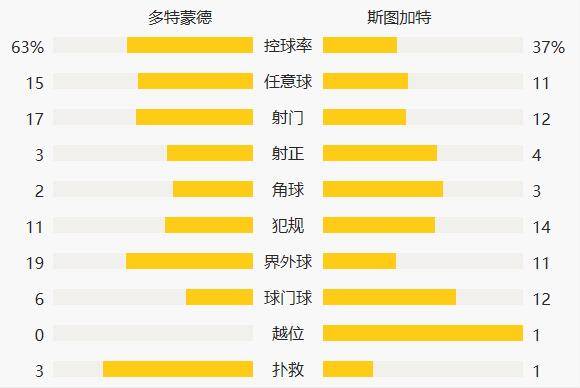 Golden jackal, expansion in Italy continues. That is...

The Pont eats its hands but stops the...

Football on TV: Milan and Inter in the...