Dialogue丨Chinese Men’s Volleyball Team Changjiang River: Why did I choose to play in Japan

Original title: Dialogue丨China Men’s Volleyball Team Changjiang River: Why did I choose to play in Japan

In the new season, Jiang Chuan will put on the jersey of the JT Thunder Club and compete in the Japanese V1 League. At the age of 28, he finally started his overseas career.

Going abroad to play football and improving himself in a wider world has always been Jiang Chuan’s dream. After leading the Beijing men’s volleyball team to the league championship last season, Jiang Chuan completed an “essential” goal in his career. Now, he’s on his way to his next goal. 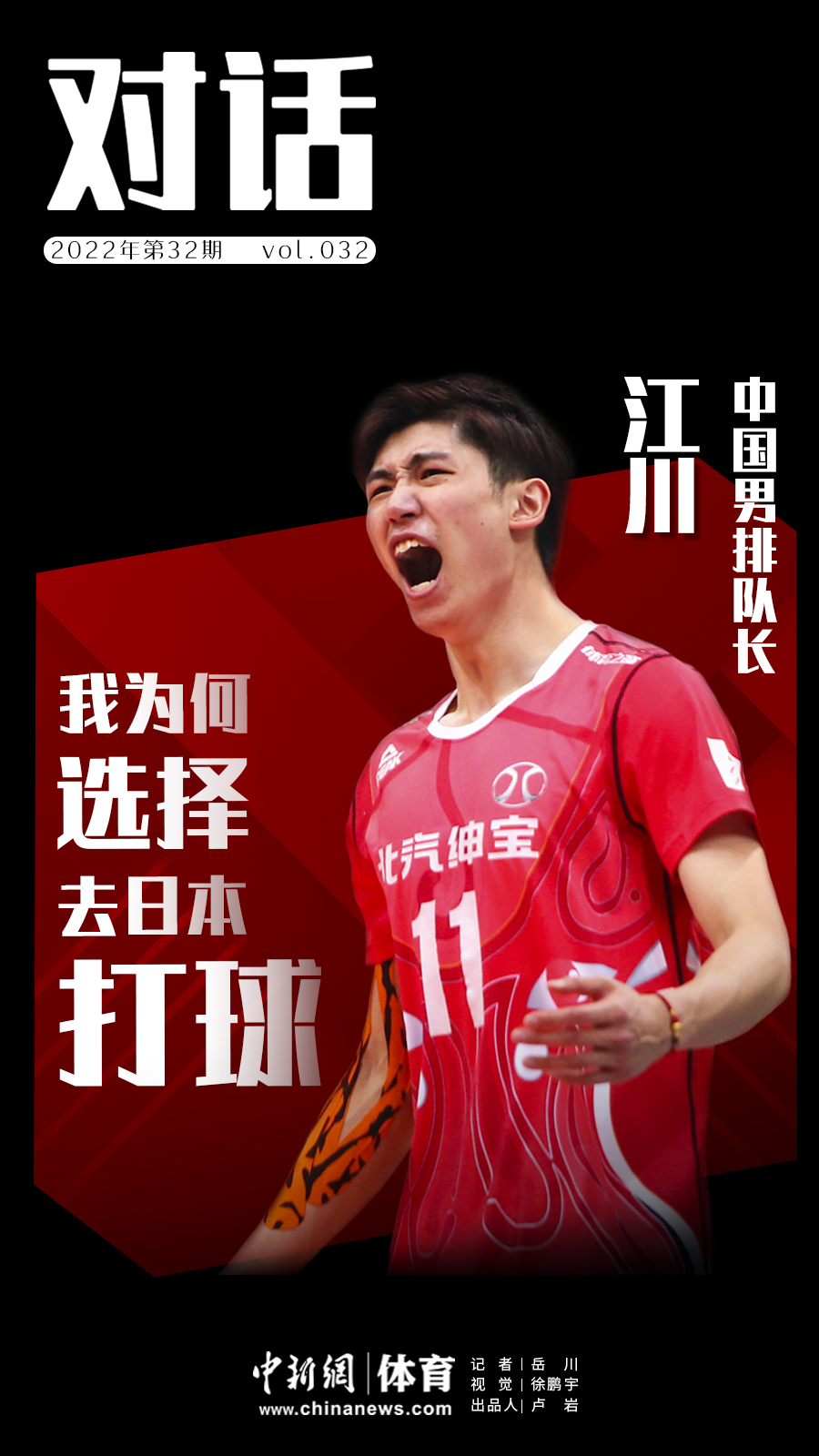 Although he has been photographed by many overseas giants a few years ago, for Jiang Chuan, everything about studying abroad seems unfamiliar. In a recent conversation with China-Singapore Sports, Jiang Chuan stated his reasons for going to Japan to play and his longer-term career plans.

China-Singapore Sports: As the captain of the Chinese men’s volleyball team, many overseas clubs have thrown olive branches to you. Why did you choose Japan as your first stop to play abroad?

Jiang Chuan: The final decision to play in Japan was the result of a comprehensive consideration of many aspects. In fact, since I first entered the national team, I have received invitations from clubs in Italy, Poland and France. I am also very eager to go out to study and communicate.

When you’re young, it’s exciting to receive an invitation from proudgate. But with age, there are more dimensions to consider. Studying abroad is not a simple matter of playing in another place. There are many practical issues to think about, including one’s own life, integrating into the new team, communication with coaches, and language. Only when the off-court preparations are adequate can the ball be played well on the court.

Japan is relatively close to China and is relatively easy to adapt to. Players who have played in Japan in recent years also have better feedback on improving their skills. The first step in going abroad to play, I think, is to take it slowly. This will help my personal development, and all parties are very supportive.

See also  Milan, Pioli: "I hope to stay longer. Coaching the national team? In the future, not now" - Sport

Leading the Beijing men’s volleyball team to the league championship is an indispensable goal in my sports career. After the team won the championship last season, the leaders of the club had exchanges with me about my future career plan. Everyone believed that the first step should be taken well and steadily, so I finally chose to play in Japan. I am also looking forward to continued development in the future.

In fact, there are other clubs to choose from, but the JT Thunder is more competitive and has a good lineup, including the introduction of the main attacker Russell from the United States. If we combine it with each other, it should have a good effect.

China-Singapore Sports: JT Thunder ranked sixth in the league last season. What are the club’s goals for the new season? The new coach of the team is Lozano, an Argentine who has coached the Chinese men’s volleyball team. Have you communicated with him before and after signing the contract?

Jiang Chuan: JT Thunder didn’t perform well last season, and the team hopes to make a breakthrough. Competitive sports, everything has to be the first. Regardless of last year’s results, since participating in the competition, we must strive for the best ranking.

Lozano came to the JT Thunder after I decided to join, and I joined the team one step ahead of him. I am very pleasantly surprised by his arrival. After all, we have cooperated before. This is the process of continuing the front line, and we will not be unfamiliar with each other.

But this time, unlike before, I played the role of a foreigner. The new season will start in late October, and I will arrive early to get in touch with the team. I want to do my best to help the club achieve its goals.

Sino-Singapore Sports: How much did you know about the Japanese V1 league before? Facing the new season, what are you most worried about?

Jiang Chuan: For the V1 league, because there are players around to play in Japan, I know the relevant situation. But I didn’t pay much attention before, and I’m still learning about it.

As for worry, everything is still unknown now, everything is my imagination. For me, I have never experienced many things in terms of food, housing, transportation, etc. to play abroad this time, and I am also earnestly preparing for it. When I really encountered difficulties, it was the biggest test for me.

China-Singapore Sports: What changes do you hope to bring to the Chinese men’s volleyball team through the experience of playing abroad?

Jiang Chuan: In my opinion, the teams in the V1 league are not weak, and the signing of each team is relatively successful. Many world-class stars are playing in Japan, and the star lineup is very luxurious. Playing against them is a workout for me.

The V1 league may be different from the Volleyball Super League in terms of development and operation, and there are also places that need to be learned and learned. Outside the league, I think the combination of youth development and sports education is the future direction and trend, and Japan has done a relatively good job in this regard.

I hope this time I can have a deeper understanding of Japan’s youth training system and campus sports, and bring these insights back to China. Through what I can do, I can help the development and future planning of Chinese volleyball.

China-Singapore Sports: In this World Men’s Volleyball League, the Japanese team has a good record. What lessons can the Chinese men’s volleyball team learn from?

Jiang Chuan: There are several players in the Japanese men’s volleyball team who play abroad, which is inseparable from the growth of their experience. The lack of height is the shortcoming of the Japanese team, which may restrict the team’s upper limit, but they have achieved the ultimate in other aspects, which is what the Chinese men’s volleyball team should learn.

Since the Tokyo Olympics cycle, the Japanese men’s volleyball team has a relatively neat lineup, the team is in good shape, and the players have more experience than us. A team will always have lows and highs, and they have experienced setbacks to get to where they are today.

Through the reorganization of the Paris Olympic cycle, in fact, the Chinese men’s volleyball team is also going through this process, but it still needs time to hone. I think this path is the right one and I hope the peak will come as soon as possible.

China-Singapore Sports: Going to Japan to play is the first step. What do you expect from yourself? Are there other longer-term plans after taking this step?

Jiang Chuan: For me, there is no end to learning. All aspects of his skills need to be improved, especially weak links such as defense and small ball.

When I go to Japan to play this time, I also want to try new technologies, including areas that have not been covered before. Hopefully I can adjust to life in Japan and live in harmony with the team. I also look forward to improving myself, taking it to a new level, and sharing my experience with you when I return to China.

See also  Kerr: Everyone always says that Curry is not good on defense, but actually didn't watch the game at all_Warriors

As for the future, we still need to plan carefully. After all, in the international arena, 35-year-old players are still in their prime. I am 28 years old and have a long way to go. I hope my future plans can help the Chinese men’s volleyball team make breakthroughs in performance.

China-Singapore Sports: As far as you are concerned, what other goals do you have this year?

The recovery process in July and August will be critical for this injury. I hope that through this period of time, I can return to a state where I can play games, so that it is meaningful to return to the team and contribute to the Chinese men’s volleyball team. On the other hand, even going back is difficult to help the team, which I don’t want to see.

As for the specific time of the comeback, I hope to catch up with the World Championships which will be unveiled at the end of August.

China-Singapore Sports: What are the goals of the Chinese men’s volleyball team for the Paris cycle?

Jiang Chuan: In the Paris cycle, the primary goal of the Chinese men’s volleyball team is to rush to the Olympic Games, which is understandable. The qualifying rounds will start next year, and the competition system is more cruel than before. The tournament system is very contingent, and all teams have a chance.

As can be seen from the World Men’s Volleyball League, the Chinese team now has a certain strength. This World League has achieved the purpose of training the team, especially the performance of young players. It was a pity to lose some games, which exposed the shortcomings of the team. This is the direction we will work hard in the future. Everyone feels that the World League has gained a lot and hopes to make up the gap through training.

We will use this year to solve problems, make progress and improve. Paris cycle, can look forward to the Chinese men’s volleyball team.

There is no man who does not play Game! MAG Trident S 5M makes gaming a trendy thing | GQ Taiwan

Yang Jue celebrates his father’s birthday: Happy birthday to the new brother who is always shining

Juve on Paredes, Depay and Zaniolo

Cincinnati, fatal tie-break for Berrettini: immediately out with...

Dumoulin anticipates his retirement ‘with immediate effect’: no...

Di Maria: goal and injury on his debut...