On November 25th local time, Lin Gaoyuan (left) and Zhang An were in the game.Photo by China News Agency reporter Liu Guanguan

In the competition for the top 8 in mixed doubles, Lin Gaoyuan/Zhang An’s opponent was Skachkov/Vorobeva of the Russian Table Tennis Association. After 4 rounds of competition, the Sino-US transnational combination won 3-1. The scores of the 4 games were 11 to 9, 10 to 12, 11 to 6, and 11 to 5.

When summing up the game, Lin Gaoyuan said that there may be some problems in the second game, but this is also a good opportunity for their combination to sum up experience. He said that his cooperation with Zhang An is becoming more and more tacit.

Zhang An said that Lin Gaoyuan is a very good doubles partner, “He always encourages me, and I feel at ease with him.”

Another pair of Sino-US transnational combination Kanak/Wang Manyu who played afterwards lost 2 to 3 to the Indian combination Ghana Sekaran/Batra and missed the quarterfinals. 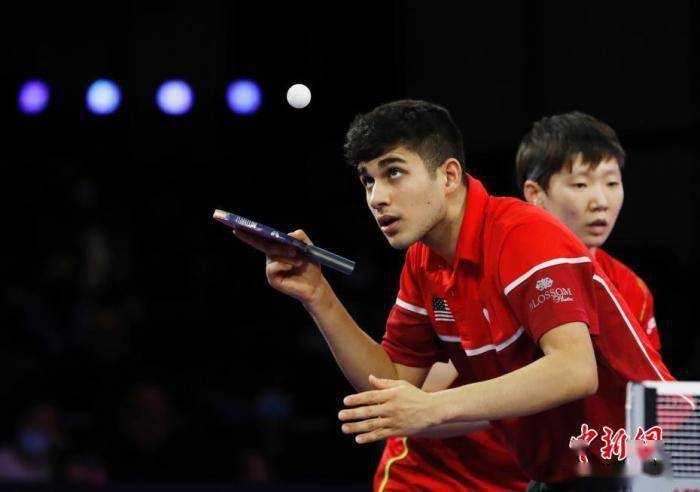 On November 26, local time, Wang Manyu (right) and Kanak were in the game.Photo by China News Agency reporter Liu Guanguan

In the first two games, the Sino-American combination won with difficulty 17-15 and 12-10. In the 3rd game, the fight between the two sides was still fierce. After missing two match points, the Chinese and American team was overtaken by the Indian team and lost the game 10-12. Subsequently, the Indian team won two consecutive games 11-6 and 11-7 to advance to the top 8.

After the game, Wang Manyu said that although the Sino-US combination was 2-0 in the first two rounds, the score difference was 2 points and there was no obvious advantage. She said: “It’s a pity that there were two match points in the 3rd game that we didn’t grasp. But we didn’t have any big problems overall.”

Kanak said that although he has only cooperated with Wang Manyu for 3 games, he has learned a lot from her and coach Xiao Zhan. He said that he was very excited when he heard the news of the multinational partner. In his career, this is a rare opportunity to cooperate with a world champion.

NASA launches vehicle to hit an asteroid to change its orbit-ezone.hk-Technology Focus-Technology Cars

The price of insulin is reduced by 48%. The sixth batch of countries organize the centralized procurement of drugs and produce the results of the proposed selection

Mbappe talks about Real Madrid: I understand their...

Cagliari, Nainggolan hypothesis to immediately aim for the...

A precious equal for Frigirola who goes to...

Volleyball, the last toast of the tricolor Panthers:...

The APU relies on super Cappelletti to go...

The Chinese Super League is about to be...

From Riz: “The nursery of the Dolomites will...

Suicidal biker in Treviso, after the death of...