This ice dance drama named “Mulan” is based on the traditional Chinese historical story Hua Mulan. The average age of the young actors in the show is only 13 years old. “charitable projects. Since its inception in 2020, the project has become an excellent example of using social forces to help the 2022 Beijing Winter Olympics and achieve the goal of “300 million people participating in ice and snow sports“.

In the performance, the young actors artistically reproduced the growth experience of the protagonist Hua Mulan through exquisite figure skating movements, expressing the responsibility of the “heroine heroine” and the common theme of pursuing peace. At the event, Juan Ann Samaranch, chairman of the Beijing Winter Olympics Coordination Committee of the International Olympic Committee, expressed his high recognition of Samsung’s public welfare project through a video: “Ice and snow sports need the promotion of social forces, and Samsung is one of the driving forces. The ‘Samsung Ice and Snow Classroom’ project showed children the fun of ice and snow sports. Through ice dance performances, the children showed the true Olympic spirit in their hearts. Samsung is concerned with the Olympic movement, and is more concerned about the growth of the next generation, focusing on the growth and development of young people. developing”.

As early as August 2020, as a global partner of the Olympic Games, Samsung actively responded to the call for “300 million people to participate in ice and snow sports“, and jointly launched the “Ice and Snow Classroom” public welfare project with the Samaranch Sports Development Foundation. and other places, providing free skating skills training for 2022 teenagers. Through the activities, children can not only get the guidance of professional coaches, but also have face-to-face communication with the world champion of figure skating, enhance their understanding of the Olympic spirit, and allow them to face challenges more bravely in their growth.

In 2021, in order to allow young people to better understand and participate in ice and snow sports, Samsung’s “Ice and Snow Classroom” public welfare project will be further upgraded, openly recruiting young people aged 8 to 16 in Beijing who love figure skating, and finally assembled through the selection of professional judges. A figure skating dance troupe composed of 35 young figure skating players will rehearse an ice dance drama with the theme of Hua Mulan as a tribute to the upcoming Beijing Winter Olympics.

To this end, Samsung specially invited Chen Lu, the first Chinese figure skating world champion, to be the chief director of the ice dance drama, giving more professional guidance to the children. At the event, Chen Lu said, “Through this ice dance rehearsal, the children have learned how to meet challenges in difficult situations, and take part in the growth and changes brought by the Winter Olympics as masters. I also hope to pass on my experience. To these children who like figure skating. To promote ice and snow sports, social forces are indispensable. I have seen many companies take action, and Samsung is a very typical example.”

At this event, the Samsung Olympic Commemorative Edition mobile phone specially created for the Beijing Winter Olympics debuted. This phone adds unique Olympic elements to the Samsung Galaxy Z Flip3 5G. It uses a white glass back shell with a dazzling golden middle frame, and the joint Logo design of Samsung and the Beijing Winter Olympics emblem on the back panel. Super recognizable appearance. At the same time, its internal UI has also been specially designed. From the theme interface to the screen reminder, it is redrawn around the Olympics and ice and snow sports scenes and other elements, making the whole machine quite memorable and collectible from the inside out. In addition, this commemorative version of the mobile phone is also pre-installed with a number of Olympic-related applications, allowing consumers to intuitively and conveniently understand all aspects of the Beijing Winter Olympics. 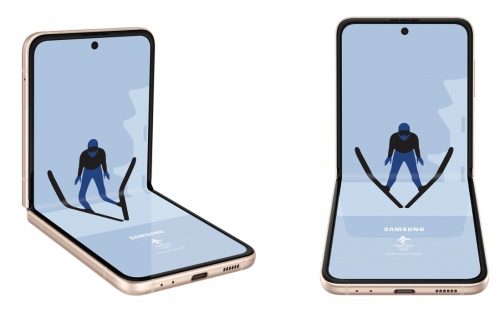 In 2008, as the Olympic Games entered “Beijing time”, Samsung and Beijing forged a deep friendship. At that time, the global wireless mobile communication was not developed, and 3G technology was still in the brewing stage. Samsung innovatively brought the “WOW” Wireless Olympic Works to the Beijing Olympic Games, and built a mobile phone that can obtain information anytime, anywhere. The system helps stadium staff, coaches, athletes and media personnel to better complete their respective tasks. This system redefines the organization and management of international sports events, creating a true “Wireless Olympics” for the first time. In 2015, Beijing successfully bid to host the Winter Olympics, becoming the world‘s first “Double Olympic City”. Now, the countdown to the Beijing Winter Olympics has entered, and Samsung will continue to provide support in AI, 5G, VR, AR equipment, etc., with leading technology and innovative products, to allow more people to participate in the Olympic movement, let the Olympic Games The spirit is inherited and carried forward again.

From Samsung’s cooperation with the Olympic Games, it is not difficult to find that the concept of “sharing” runs through it all the time. Whether it’s the “Ice and Snow Classroom” public welfare project to share the joy of ice and snow sports with Chinese teenagers, or to share the changes in life with technology to more consumers through technology and products, Samsung’s “sharing” concept is the same as that of the Beijing Winter Olympics. Spiritual fit.

With all preparations for the Winter Olympics in place, Beijing’s night sky will soon be illuminated by the Olympic flame, attracting attention from all over the world. Forces from all walks of life are also taking active actions to contribute to a wonderful, extraordinary and outstanding Olympic Games.

Covid: pediatricians, 268 under 19 in intensive care, 68 are less than 3 years old since the beginning of the epidemic – healthcare