At noon yesterday, Beijing Guoan Football Club officially announced that local coach Xie Feng took over Bilic’s coach and became the coach of the Guoan team in the new season.

As for Xie Feng, I believe that Beijing fans will not be unfamiliar. As a fast horse on the inner side of the Guoan team, he won two FA Cup championships and a league runner-up with the Guoan team. He scored Arsenal’s goal that year. Beijing fans Jinjin A classic of Ledo.

On May 22, 2016, Beijing Guoan played against Shijiazhuang Yongchang, Xie Feng conducted the scene

As a firefighting coach, Xie Feng has also coached the Guoan team twice. In 2016, Xie Feng served as the acting head coach of Beijing Guoan in the middle of the season until the end of the season. During his leadership, he achieved 9 wins, 7 draws and 5 losses, helping Guoan to lock the fifth place in the league. name. In 2017, Xie Feng served as the leader of the Beijing Guoan team and the leader of the Chinese coaching team until he handed the commander seal to the German Schmidt. 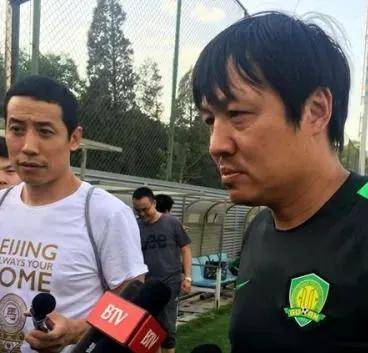 Now taking up the coach of the Guoan team for the third time, Xie Feng said that he will cherish the hard-won opportunity to play for his hometown and make more contributions to Beijing football. “Return to your hometown and your favorite team. , I am very happy, very happy, the city of Beijing and the Beijing Guoan Football Club have brought me so many good memories, playing football here, growing up, entering the national team, becoming famous, including playing here Coach, it can be said that this city and the club have always been with me and cultivated me. This is my third time coaching the Beijing Guoan team. I will also do my best to lead this team and strive for better results. I also hope to discover more young players and potential players through the league this year, and finally, I also hope to take root in Beijing, deeply cultivate the club, and cultivate more players for Beijing Football and my favorite team.”

Local coaches or foreign coaches, this is indeed a question. After Bilic and Beijing Guoan Football Club terminated the contract, the team urgently needed a new coach to determine the plan for winter training and the future direction of the club’s development.Therefore, according to Li Ming, general manager of Guoan Football Club, the club immediately confirmed Xie Feng as the team coach candidate, “because Bilic did not disclose his plans to the club in advance, he left the league due to family reasons, So we don’t have more time to select coaches. We collected some coaches in the first place. Here are the information of foreign coaches and Chinese coaches, but we also analyzed the current situation. As the head coach, Xie Feng is currently the best. A suitable candidate. Because Xie Feng is a very good local coach, and he has experience in Beijing Guoan from player to coach. He has a good character and strong comprehensive ability. Players and youth training are more familiar, and it is more beneficial for the team to complete the preparations for the new season earlier.”

In addition to the advantages of Xie Feng’s guidance, the risk of choosing foreign teachers also makes the club more inclined to choose local coaches to lead the team. At the same time, the team needs to supplement more fresh blood in the future, and discovering and using new people will also It is precisely one of the major advantages of local coaches, so the club and Xie Feng hit it off and both signed the contract smoothly.“We have also made some analysis on hiring foreign teachers. Under the current circumstances, there are certain risks in choosing foreign teachers. We also consider that the current selection of foreign teachers may affect the team’s preparations, because in recent years, due to the impact of the epidemic, Due to the problem of entry and exit, the team has not been able to enter the preparation state earlier. Now it is also the first time to officially announce that Xie Feng will be the head coach of the Beijing Guoan team. This year, we will devote ourselves to the team’s preparation earlier. The work has also laid the foundation for this year’s good results.

Instructor Xie Feng has always been committed to cultivating young players, and he is also a coach who is familiar with Guoan. He also hopes that under the framework of the main force in the new season, we can train more young players so that the Guoan team will have continuous competitiveness in the future. “

It is understood that after completing the signing, Xie Feng will build his own coaching team and formulate a new winter training preparation plan for the team. After the Spring Festival, the team will go to Shanghai for the first stage of winter training.Return to Sohu, see more

“They too are a risk”

Li Jiaxin posted photos of hospitalization and said that she was in the intensive care unit to save her life in 48 hours._Family_Life_Professional

Between uncertainties and fakes, the 30th resists as...