Home Sports Media person: Shenzhen Football Club dares to be angry with the leaders and dare not speak out. Dai Weijun wanted to go to Europe in April last year_Xiaodai_Cheng Wenli_Freedom
Sports

Media person: Shenzhen Football Club dares to be angry with the leaders and dare not speak out. Dai Weijun wanted to go to Europe in April last year_Xiaodai_Cheng Wenli_Freedom

1. I have no grudges with anyone at the club. I once said in the Shenzhen fan group that Shenzhen Football Club has always taken care of me, especially when I was hospitalized last year, they visited the hospital many times to visit and console me, for which I am very grateful. However, the club’s problems exist objectively. In this regard, the sponsors and relevant leaders are not clear about this. They will not stop sponsoring because of the few Weibo I posted. It is the same sentence, relying on sponsorship in the near future, and relying on share reform in the long run.

2. Some people say that I am creating deep negative news, hehe, if this is the case, I would have been reported and blacklisted. When I was chatting with my friends the other day, they all saw that someone was putting on the final madness. In fact, there are also many doubts within the team, but everyone dares to be angry and dare not speak.Last week, I went to the club to meet and communicate with the leaders. I also hoped that the club could face up to the internal doubts and avoid another accident. Unfortunately, the focus of our conversation was on the topic of Xiao Dai’s pursuit of freedom. They didn’t want to take my advice, and I remember saying something to me when I left: you should never take a player’s word for it. To be honest, I am very disappointed.

3. A year ago,That is, in April last year, when I chatted with Xiao Dai, he said that if there is a chance, he would like to go to Europe to practice., I hope he can do it this time. Jiaolong is not a thing in the pool, bless Xiaodai! 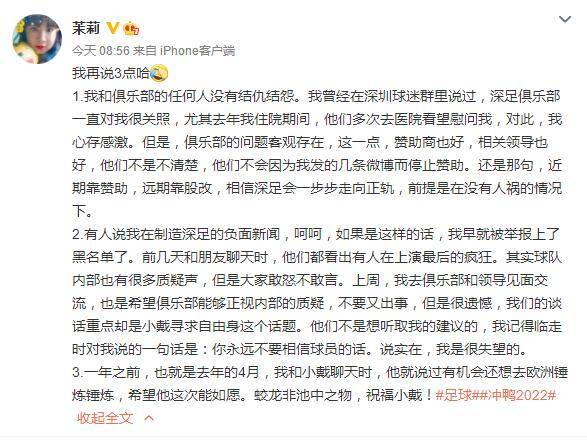 The screenshot of the chat with Dai Weijun’s lawyer, which was revealed last night, shows that Dai Weijun will sign with an overseas club. If he cannot rule to be free, he will apply to FIFA for an international temporary transfer. Dai Weijun has been striving for freedom from beginning to end in order to play football in Europe.

Covid, another month with masks (but not everywhere): here is Hope’s plan