National Games: Continuing the excellent status of Tokyo, all Hongchan won the championship

National Games: Continuing the excellent status of Tokyo, all Hongchan won the championship

On September 12, Quan Hongchan, a player of the Guangdong team, greeted the audience after the game. She won the championship with a total score of 419.25 points.Photo by Xinhua News Agency reporter Xue Yuge

Xinhua News Agency, Xi’an, September 12th. “Fifth round of action, Guangdong Quan Hongchan, 5253B, difficulty coefficient 3.2.” As the live broadcaster reported that Guangdong player Quan Hongchan was about to try the action, Xi’an Olympic Sports Center swimming and diving The audience held their breath. They were all waiting for Quan Hongchan, the last player to appear in the women’s 10-meter platform final of the National Games. With the reappearance of “Splash Disappearance Technique”, the audience stood up and applauded Quan Hongchan, who successfully reached the top of the domestic arena with her perfect performance.

The competition in the women’s 10-meter platform final was fierce, with Quan Hongchan, Ren Qian, Chen Yuxi, Zhang Jiaqi and others all winning gold medals. In the finals on the afternoon of the 12th, Quan Hongchan played steadily. In the fourth and fifth rounds with a difficulty coefficient of 3.2, multiple referees scored full marks. The “Splash Disappearance Technique” was performed continuously and finally scored 419.25 points. , Leading the second place by nearly 20 points to reach the top perfectly. Chen Yuxi and Ren Qian won the second and third places. 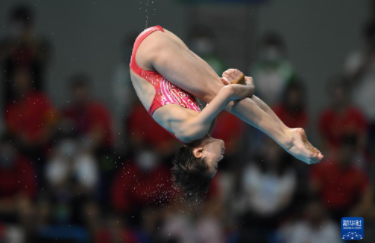 On September 12, Quan Hongchan, a player of the Guangdong team, won the championship with a total score of 419.25 points.Photo by Xinhua News Agency reporter Xue Yuge

Quan Hongchan said after the game that as a young athlete participating in the National Games for the first time, she was very happy to be able to compete with world champions including Chen Yuxi and Ren Qian. She was able to receive the highest award in the National Games. The station is also very happy. He Weiyi, coach of the Guangdong diving team, said that Quan Hongchan, as a fledgling young athlete, trained in the same swimming pool with Ren Qian and Chen Yuxi, and gave her a lot of “positive energy” for forming a rigorous competition attitude. “We will seriously cultivate Quan Hongchan, the rare Chinese diving star of tomorrow, so that she will continue to win glory for the country in the future.” He said.

Chen Yuxi said that after the Tokyo Olympics, they did their best to maintain the state of the game. With the end of the National Games, they will continue to train hard, compete seriously, and devote themselves to preparing for a new Olympic cycle.

Meeting with the population on the emergency plan for Autogas Nord

Antetokounmpo: James is still the strongest today, I...

Fallen and run over, the driver Dean Berta...

Chaos in the Duomo, no vax procession breaks...