At 0:30 a.m. on August 7th, Beijing time, the first round of the 22-23 Premier League started. Chelsea played away to Everton. In the 10th minute, Everton defender Godfrey left the field with a serious injury. In the stage, Jorginho scored a goal. In the 70th and 75th minutes, Everton and the Blues defenders Mina and Koulibaly each left the field due to injuries. In the end, Chelsea defeated Everton 1-0 away with a 1-1 victory. A small victory made a good start.

In the 7th minute, Reese James took a free kick into the penalty area, and Havertz’s header was saved. In the 10th minute, Havertz on the left side of the frontcourt used the opponent’s back pass to complete the counter-attack, and then hit the goal near the bottom line and hit the side net. It is worth mentioning that during this defensive process, Everton defender Godfrey suffered a serious ankle injury due to too much chasing back, and the latter was also carried off the field on a stretcher.

In the 19th minute, Chelsea took a tactical corner kick, Mount received an oblique pass from his teammate on the left side of the arc, and then burst into the goal and was thrown. In the 21st minute, Sterling fell to the ground in a confrontation in the penalty area, and the referee did not say anything. In the 24th minute, Everton took a corner kick from the right. Mendy hit the ball out of the penalty area with a palm. Miklenko on the left intercepted the ball and sent a cross. Everton’s new aid Tarkovsky headed the ball. The attack was defused by Mendy. In the 27th minute, Miklenko made a breakthrough from the left and then sent a cross. Anthony Gordon’s header from the penalty area was very wide.

In the 40th minute, Sterling slid to Mount, who was in the middle of the frontcourt. The latter dribbled the ball to the top of the arc and blasted the goal and hit the defender. In the 43rd minute, Kante on the right side of the arc hit the goal with a low shot, causing Pickford to let go. Sterling made a supplementary shot in front of the goal, but the referee signaled that he was offside first and the goal was blown away.

The first half was delayed for a long time due to Godfrey’s injury, and the stoppage time reached 10 minutes.In the first half, in the 45th and 7th minutes, the goal finally appeared in a fierce battle. Blues defender Chilwell was rudely brought down by Doucoure in the penalty area. The referee decisively awarded a penalty kick. Jorginho took the penalty and made the score 1-0!

At the end of half-time, Chelsea entered half-time with a one-goal advantage.

In the 47th minute, Everton made a big kick from the backcourt. Gray on the right side of the frontcourt used the speed advantage to rush into the penalty area by himself, and then a small-angle burst shot was blocked by Mendy. .

In the 61st minute, Everton continued to attack with a long pass. Miklenko on the left side of the frontcourt received a long pass from his teammates from the backcourt. After a little adjustment, he directly lobbed the far corner, but he failed to grasp the power of the shot and the ball was far wide of the goal. In the 70th minute, the team behind Everton was hit again, and the team’s central defender Mina was replaced due to an ankle injury. 5 minutes later, Koulibaly, who suffered a hamstring injury in the previous defense, was also replaced due to injury.

In the 80th minute, Reese James took a set kick and the ball missed the left side of the goal. In the 82nd minute, Cucurella, who came on as a substitute, sent a precise cross from the left in the frontcourt, and Sterling in front of the goal was blocked by the defender. In the 86th minute, the game, which was stopped due to injury, went into trouble again. At this time, the fans in the stands were in health condition, and the referee briefly stopped the game again. This also led to the same length of stoppage time as the second half, reaching 10 minutes!

In the 90th+6th point, the Blues set the ball to the penalty area. Broya headed the goal and hung it to the far right side of the goal. The ball was won by Pickford in time. 1 minute later, Pickford made a mistake when he attacked and received a high ball, which was once stolen by Pulisic. Fortunately, the danger was resolved in time by the defending player who returned to defense.

At the end of the game, the Blues beat Everton 1-0 in a difficult battle. 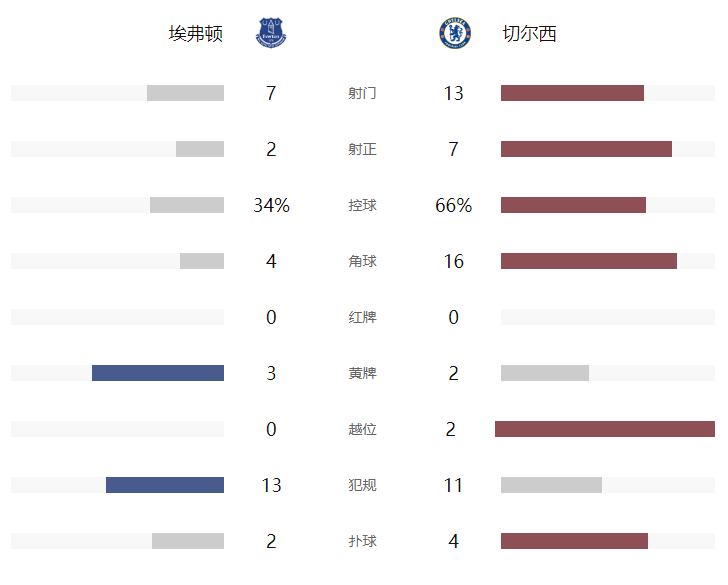 See also  TvB recites the mea culpa "We did not expect such a difference. A complicated game"