After a period of rest, the chess world reignited the smoke of the World Series. The finals of the 13th Chunlan Cup World Professional Go Championship were placed online today. Tang Weixing 9duan and Shen Zhenzhen 9duan played a triple match. At the same time, the new attempts of this finals attracted attention.


Observe the opponent in real time during the game

The Chunlan Cup is the earliest Go World Tournament in China. Since its inception in 1998, it has witnessed and helped Chinese players to fight the Korean Wave and reach the top of the professional chess world. Coulee, Chang Hao, Chen Yaoye and Tan Xiao have all won the championship. This year’s two players, Tang Weixing and Shen Zhenzhen, both broke into the Chunlan Cup final for the first time. During the promotion process, Tang Weixing defeated the Korean players Shin Min, Park Yongxun, and the domestic first-ranked Ke Jie, while Shin Zhenzhen defeated the three Chinese players Xu Jiayang, Fan Tingyu and Lian Xiao.

Affected by the epidemic, the Chunlan Cup triple play finals were conducted online. At 10:30 this morning, Tang Weixing and Shen Zhenzhen were connected to the Chinese Chess Academy in Beijing and the Korean Chess Academy in Seoul. The tournament is held under the epidemic, and the Go world has accumulated rich experience. The finals starting today will also record the entire game of the players during the game, the camera will be monitored in all directions, and the referee will supervise the game in the game room.

In the past year or so, world competitions have to be changed to online, and chess players hope that there will be more “face-to-face” chess games. World champion Yang Dingxin 9duan once said that he cherishes the opportunity to face Yi. Another world champion, Gu Zihao 9duan, also said: “In any case, what we chess players need most is the opportunity to play chess face to face. The exercises obtained in this kind of game cannot be replaced by offline training chess.” What’s interesting is this. In addition to the computer and mouse used in the game, the second game room has also added a facility-there is another laptop on the player’s side to transmit the opponent’s game screen in real time, that is, Tang Weixing can see Shen Zhenzhen’s game at any time. Emoticons, the other party can also see him in real time. This gave the original online game of dialogue in the air, to some extent, the feeling of face-to-face chess. 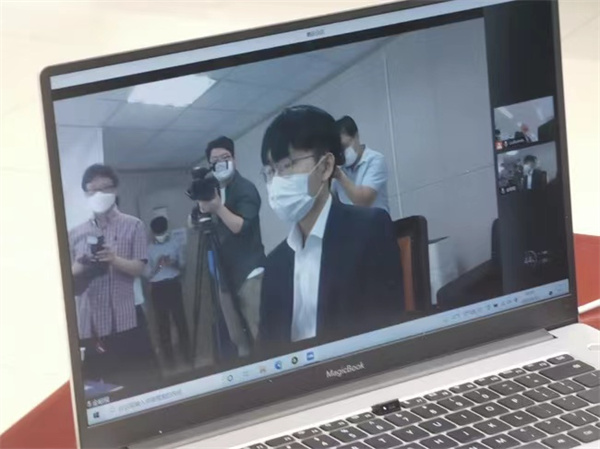 Caption: The match screen of opponent Shen Zhenzhen transmitted by the laptop in real time

This is the 28-year-old Tang Weixing Jiudan’s first challenge to the Chunlan Cup. He had previously won the world championship three times, including two Samsung Cups and one Yingshi Cup. His defeat will include Lee Sedol and Park Tinghuan, who were the first Korean Go players at the time. In this year’s Chunlan Cup, he is facing the 9th dan, the strongest Hallyu player, Shen Zhenren, who has become the strongest opponent of Chinese Go after winning his first world championship in the LG Cup in February last year.

Tang Weixing, who appeared in the game room today, showed people with a bald head, which made people “bright”. Some people jokingly said: “‘Tang Xuanzong’ has become a’Tang Monk’.” A bald head is refreshing. In today’s first game, Tang Weixing guessed that black would go first. In the introductory white game, the next black team gained the advantage, and the black game gained the upper hand. The two sides moved to the right, Shen Zhenzhen and White used the offensive to encircle Dakong in the mid-belly, and after the black was settled on the upper side, the game entered a slightly favorable official game for black.

Regrettably, during the countdown, Tang Weixing made a mistake in Hei 197 and “removed” two sunspots in the White 200, and the situation was reversed. The two sides moved to the 271st hand, and White won by a quarter of the stone. In the triple play finals, Shen Zhenzhen led 1-0.

After the game, Nie Weiping said that this game of white chess only won 1 and a half goals. If there is a little more time, Tang Weixing is responding to Shen Zhenzhebai’s 196 “crush” “cheat” without error, then he hopes to win this game of chess. Very big. Tang Weixing admitted that he did not recognize Shen Zhenzhen’s “trick” and gave the game that he had hoped to win to his opponent. “The goal I set for myself is that whether I can see it clearly, I will have to count the game in 1 minute. Play in the last few seconds. If you can see as many times as you can, this game is executed in this way. But in the end, I still didn’t see clearly… So the calculation power is still not as good as before. I think if that place is replaced with In the past, it shouldn’t be like this.”

Third dose in Piedmont, we start from immunosuppressed

How to eat pasta to lower the glycemic index? Grandma’s trick

“Together to the future”-interpretation of the theme slogan...

Came, the first is ok eight goals to...

Molina is doing well and Gotti is now...

Capuozzo winks at Crowley: “We talk regularly, I...