Original title: The national football team strictly implements the bubble management model and submits the elevator use plan every day

Under such a severe situation, it is not surprising that a staff member of the hotel where the national football team was stationed tested positive for the new crown on the 24th.

Once the news was released, fans and the media were worried about the safety of the team in Japan.

The reporter found that, except that after the training on the 24th, the team stopped at the training ground to wait for the hotel to complete the killing, everything in the team was normal.

As the Japan Football Association announcement said: “We confirm that the staff, players and other relevant personnel of the Chinese national team are not close contacts of the staff. There is no change in the preparation of the Chinese team for the game on January 27.”

This “no change” benefits from a strict “bubble” management model.

Compared with the previous competition in many countries in the Middle East, the Chinese team does not have the conditions to book a hotel in Tokyo. To achieve “bubble” management in a hotel mixed with other people, every detail must be sorted out.

During their stay in Japan, the Chinese team stayed on closed floors and used dedicated access channels. The hotel provided necessary services on the principle of “zero contact”.

During the stay, the hotel staff will not clean the room. The team can only go to the dedicated restaurant for meals after the killing and preparation work is completed and the hotel personnel leave the venue.

The same is true for gym use at fixed times. Material supply stations are set up on each floor, and daily necessities update, waste recycling, and laundry bags are all realized through the supply station.

The elevator cannot be used 24 hours a day. The team proposes the elevator use plan to the hotel every day, and the elevator is used at a fixed time. The hotel staff (with a negative antigen test result on the day) wears a full set of protective equipment to operate the elevator each time, so as to prevent the team personnel from directly touching the elevator buttons.

Every time a reporter subconsciously wants to press the elevator, a staff member will remind him. 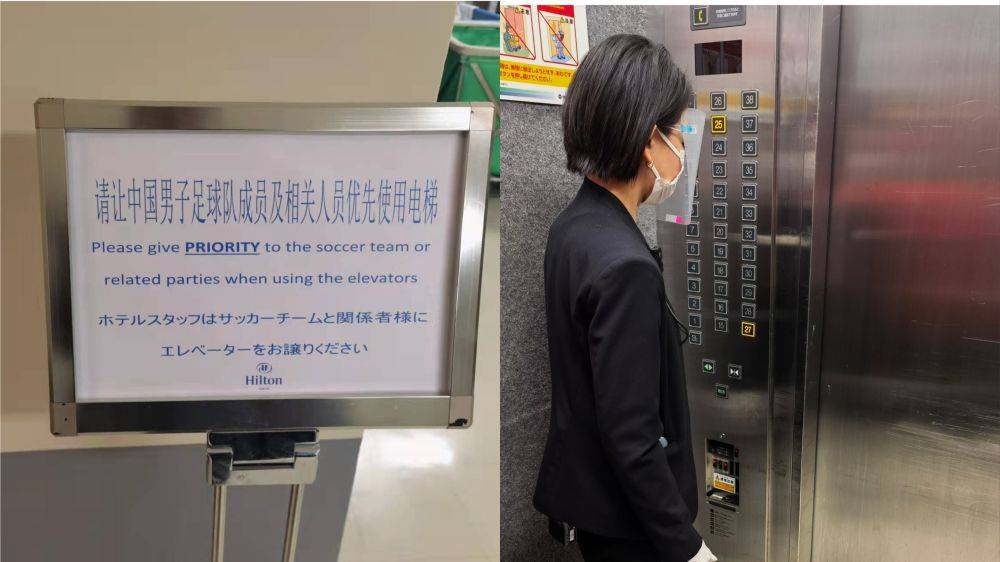 Guard against people and also against things. After the reporter’s colleagues in Japan sent the phone card to the front desk, a small phone card had to be sterilized several times before it could be sent into the “bubble”.

Everyone in the Chinese team has to undergo a nucleic acid test every day, and only after the result is negative can they go out of the house. Nucleic acid testing is also “zero-contact”, and the testing method is slightly different from the “spitting-style” that attracted much attention during the Tokyo Olympics: after 30 seconds of holding a cotton swab in your mouth, you can put the cotton swab into the test tube.

In addition, according to the requirements of the Japanese Football Association, the hotel arranged the restaurant in a desk style, and there is a distance between the tables, and everyone eats at one table.

In fact, under such strict epidemic prevention measures, it is difficult for any hotel staff to become close contacts of the team, and naturally there is no need to be too nervous. The reporter followed the team all the way to the top 12. This is far from the first time, and it has been dealt with in a timely manner every time.

For the Chinese team, who competed overseas for the entire top 12, the risk of infection is like the sword of Damocles hanging overhead. Once the team stays overseas due to the epidemic, it will have an immeasurable impact on the entire Chinese football.

But after all, no one can guarantee absolute safety. The Japanese team is expected to have 25,000 spectators in the game with the Japanese team on the 27th. Not long ago, a Japanese fan who went to the stadium to watch the Emperor’s Cup football game with a fever was diagnosed, which became an important source of the spread of the new crown virus.

Under the perilous wall for a long time, for everyone in the Chinese team, this is the responsibility and the mission requirement. However, to implement a strict epidemic prevention system, there will inevitably be sacrifices and sacrifices.

Monte, two in isolation Fabbian: «Levico? Ready we hope to be able to play “

Visit the Shougang Olympic Stadium to learn the...

Chengdu 8-year-old won the gold medal on the...

Rowing, revolutionized defense and the “play” Lanzi to...

Kanchelskis: “Kokorin? He asks for too much money...