Original title: The story of the Asian Games gold medal in the movement of Chongqing sports cultural relics must be told to children

What is hard work? What is missing? What is stress? Today, when many people discuss the word “lie down”, we suggest that you must tell the story of this Asian Games gold medal to your children and yourself.

On August 5, 2022, almost 20 years after retiring, we asked: Are you still willing to go back to be a gymnast? Huang Jing’s eyes were a little red in an instant, and her tone was a little excited. After thinking for a while, she replied: Yes.

Huang Jing is now engaged in human resources management in a state-owned enterprise in Chongqing. At first glance, she is similar to every urban white-collar worker. What is little known is that she was the champion of women’s gymnastics at the 2002 Asian Games and also won the National Gymnastics Championship in the same year. Floor gymnastics champion, Italian international gymnastics women’s individual all-around champion. These gold medals and the training and competition equipment of the year are expected to be exhibited at the Chongqing Sports Museum next year. 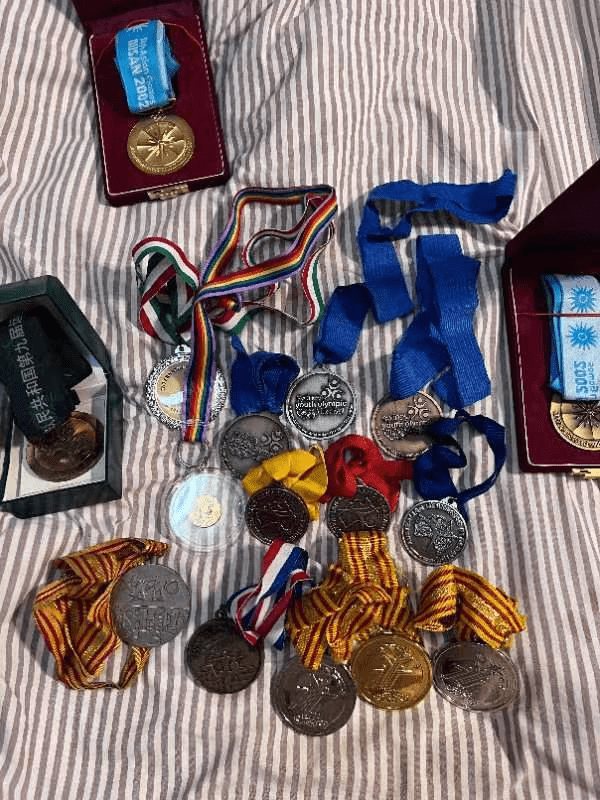 The golden age of gymnastics is from 14 to 18 years old. In 1990, when Huang Jing was just 4 years old, he began to receive gymnastics training at Lianglukou, Yuzhong District. The most impressive thing is: very hard, especially hard.

I get up at 5:30 in the morning every day, train more than 11 hours a day, and take 4 hours of cultural classes every other day. When practicing uneven bars, the palm has to deal with the huge impact force of the lever. Sometimes, a whole piece of flesh in the palm is torn off in one action, and it hurts. Can you rest for a while? No, pour a large bottle of iodine on the palm of your hand, rub it, and continue to practice. The fresh wound is rubbed on the lever and there is blood everywhere, mixed with tears, until the end of the training.

See also  "Come on, the city has a lot to do" Listen to Liushen Leilei and others tell the story of Chengdu_Xu Junhao_Lin Shuwei_Xu Bei

After a period of time, there will be a thick layer of calluses on the palms. Before each training, use a knife to thin and flatten the calluses. If the calluses are too thick or uneven, it will affect the training, and sometimes even a whole piece of meat will be ground. To this day, almost 20 years after retiring, Huang Jing’s palms are still rougher than ordinary people. She said: I can’t go back, this is the permanent mark that gymnastics bring.

Huang Jing was born in the 1980s as an only child. When he was 8 years old, he entered the Sichuan provincial team and shouldered the responsibility and mission of a professional athlete, and rarely met his parents.

Parents can’t come to visit often, let alone “sparring” and “studying with them”, because after parents come, they will be unbearable, will not let go, and will be reluctant to give up. Huang Jing said that when she called her parents occasionally, she started to cry a lot, but she stopped crying after she was 10 years old. She has learned to defuse stress and thoughts by herself, and shared some training and competition events with her parents.

However, occasionally parents come to visit the team, the children’s nature will still be released, no matter whose parents come, the whole team of children will be happy, and when the parents leave, the whole team of children will cry together. At this age, it is the time when parents love watching cartoons, listening to stories, and when they jump rope and build paper planes with their friends. They choose gymnastics, so they can only train hard.

Every time training is very hard, or when I miss my parents, Huang Jing will think, why should I practice gymnastics. Until winning the Asian Games in 2002, Huang Jing came to the answer.

For what? For the glory of hard work, even if I don’t get the gold medal in the end and become an ordinary person, I will not regret my mediocrity. I have fought hard. Huang Jing said that the hard work and hard work when he was young will definitely become a fortune.

Huang Jing is willing to donate her training equipment, gold medals, etc. to the Chongqing Sports Museum, and is more willing to tell everyone the story of her training. Because the gold medal is only the final presentation, the fighting spirit embodied is more worthy of inheritance and promotion. She said: In recent decades, we have made great progress in international competitions such as the Olympic Games and Asian Games. This is inseparable from the prosperity of the country and the hard work of every athlete. All competition is ultimately a result of People’s competition, sports, but also the comprehensive competition of intelligence and physical ability, she is proud of participating in the tough sports competition.

Xiao S shared the embarrassing incident after being drunk in response to suspected domestic violence: drinking too much and falling caused _Elly_daughter_ protest

Stankovic at Sampdoria, only the announcement is missing:...

The Apu goes against the tide: with small...

Naples, the renewal of Meret OFFICIAL: surprise on...