The start of the 2021 Short Track Speed ​​Skating World Cup once again ignited the enthusiasm for ice and snow competition. Excellent speed skaters from all countries gathered on the field to compete for tickets to the Winter Olympics. As a “dress rehearsal” before the Winter Olympics, the 2021 Short Track Speed ​​Skating World Cup will feature four races in Beijing, China, Nagoya, Debrecen, Hungary, and Dordrecht, Netherlands. In the first three races that have ended, the Chinese team played steadily, winning 5 golds, 3 silvers and 5 bronzes.

Smart technology empowers sports competition. Following the Chinese women’s volleyball team, Lenovo once again joined hands with the national short-track speed skating team to help players improve their training efficiency with smart training solutions. Lenovo Image was also the designated IT service provider for international events such as the 2006 Torino Winter Olympics, the 2008 Beijing Olympics, and the 2010 Shanghai World Expo. It has been affirmed by experts from the Olympic Organizing Committee for many times. As the official partner of China’s short track national speed skating team, Lenovo and Lenovo Images will continue to join hands with the master of the king to become stronger together!

The speed of Chinese ice skates “coming from behind” in China

This time Lenovo Image’s cooperation with the Chinese National Short Track Speed ​​Skating Team is a resonance with the spirit of constantly surpassing themselves and bravely fighting. Similarly, Lenovo Image will, as always, use smart services as the basis to help Chinese national team members improve training efficiency through smart training solutions, promote the intelligent transformation and upgrading of China’s sports industry, and make sports industry management and training more scientific and intelligent. 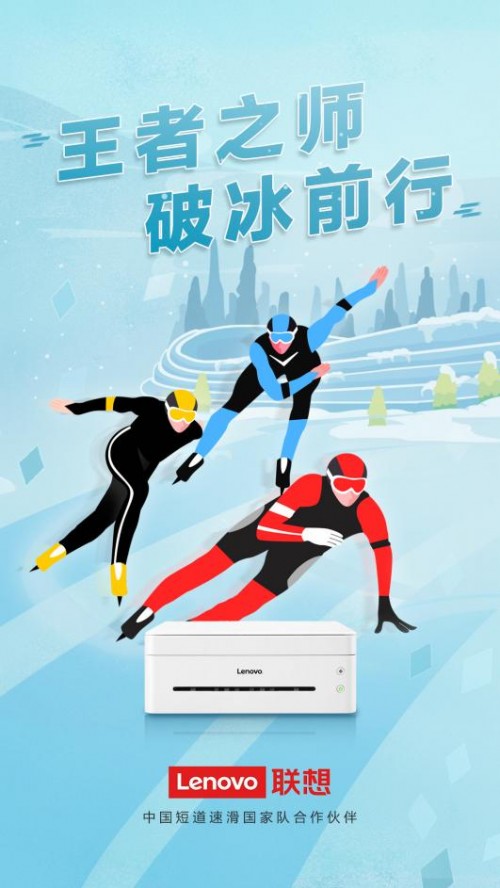 Just like the amazing speed of short track speed skating before breaking the ice, the current smart technologies such as big data, Internet of Things, artificial intelligence, cloud computing are gradually mature, and the development trend of interconnection and interoperability of all things, the printer industry is gradually moving towards the direction of cloud intelligence. develop. As a leader in domestic printing, Lenovo Printing has been following the technological wave since the 1990s, breaking through the encirclement and suppression of all imported printing products in China, and creating a number of domestic firsts: the first Chinese laser printer and the first multi-function printer in China. A series of products such as printers ignited the dawn of a domestic counterattack.

In terms of technology, Lenovo Image also continued to make efforts, insisted on independent research and development, strengthened its scientific and technological strength, and launched localized high-quality printing products based on the Chinese market and users, boosting the sustained development of the domestic printing industry. So far, Lenovo Image has built multiple product lines that are safe, reliable, and stable in performance, which can meet various application scenarios such as government, commercial, and home use. At the same time, it combines the needs of different industries to customize industry printing solutions to achieve brand power and product strength. Full speed upgrade.

Hand in hand, break the ice and move forward! With the heart of hard work, we will engrave “China Speed” together! The schedule of the 2021 Short Track Speed ​​Skating World Cup is still going on. Lenovo Images will join hands with the short track speed skating athletes. We look forward to the athletes continuing to perform well and win more Winter Olympic tickets!

Golden jackal, expansion in Italy continues. That is...

The Pont eats its hands but stops the...

Football on TV: Milan and Inter in the...

It is the record for a franchise for...

The impassable trench of the Old Wild West...