Xinhua News Agency, Tokyo, July 26 (Reporters Wang Hengzhi and Wang Qinou) The Olympics on the 26th proved once again that there is no absolute in the arena. The ideal situation that people expect China‘s two “dream teams” diving team and table tennis team to win gold medals has been impossible to achieve. At the Tokyo Olympics on the 26th, the Chinese Army won 4 silvers and 3 bronzes, ranking third on the gold medal list. Host Japan won three consecutive gold medals and topped the gold medal list.

Due to a big mistake in the fourth jump, Cao Yuan/Chen Aisen finally lost to the British duo Daly/Matthew Lee by 1.23 points. Chen Aisen expressed regret after the game, but also did not forget to comfort his teammates: “This is the game. It’s part of the young people, I always regret it.” This is also the fourth time that the 27-year-old British “prodigy” Daley has participated in the Olympics. From the 14-year-old ignorant boy at the Beijing Olympics to finally standing on the highest Olympic podium. , Daley bluntly said that this moment is incredible.

See also  Yang Ming: Shanxi will create a lot of trouble for Liaoning, Guo Ailun can play without any problems jqknews

There are so many silver medals on this day. In the women’s 55 kg weightlifting competition, although Liao Qiuyun succeeded in all six attempts, the Filipino player Diaz lifted 127 kg in the clean and jerk and won the gold medal with an advantage of 1 kg. This is also the first gold medal in the history of the Philippines Olympic Games. Zhang Yufei also won a silver medal for the Chinese team on the same day. In the women’s 100m butterfly final, she won the runner-up with a slight gap of 0.05 seconds. Although she failed to win the gold, Zhang Yufei still scored 99 points for herself. “The remaining 1 I hope that my mentality can be better, and I have also learned an important lesson, how to regulate tension.” It is worth mentioning that her 55 seconds and 64 silver picks have already approached her personal best.

In the exciting men’s gymnastics team finals, the Chinese team competed fiercely with the Russian and Japanese teams. In the end, it was the Russians who won the championship with 262.5 points. The Japanese team won the second place with a difference of 0.103 points, and the Chinese team 261.894 points. Points to get a bronze medal. In addition, Wei Meng won the bronze medal in women’s skeet shooting, and Li Bingjie set a new Asian record in the women’s 400m freestyle after the preliminaries and won the bronze medal in the event.

The Chinese men’s and women’s three-man basketball team performed well that day. The women’s team defeated the Japanese team at 15:12 and the US team, which had a complete defeat at 19:21, has locked in the knockout qualification; the men’s team, which had previously been difficult to find, ushered in two consecutive matches. Victory, defeated Belgium and Poland in two consecutive games, leaving a glimmer of hope for promotion. Chinese teenager Zeng Wenhui performed well in the new Olympic skateboard women’s street competition. She reached the final and finally ranked sixth. The championship was won by Japanese teenager Siyaka who is under 14 years old. In addition, Hong Kong team player Zhang Jialang won the men’s foil championship. 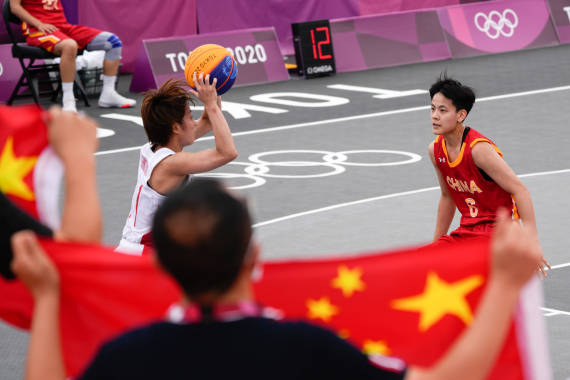 Outside the arena, the International Olympic Committee announced that Olympic medalists can take off their masks for a short time on the podium for a group photo. The Tokyo Olympic Organizing Committee revealed that athletes infected with the new crown pneumonia virus can resume playing in the field after asymptomatic conditions after the quarantine period expires and meets the relevant conditions. As of the 26th, a total of 148 Olympic-related people have been diagnosed positive, including 16 athletes.

20 gold medals will be determined on the 27th. The Chinese Army has the potential to make gold in multiple events. In addition, the women’s three major goals will be played collectively. Their performance is worth looking forward to.

Cairo: “This time I agree with Lotito: football...

Brazil and Portugal advance to South Korea and...

Tennis, Berrettini and the last commitment of 2022...