Home Sports Why is bungee jumping so expensive in the Ordovician sky?
Sports

Why is bungee jumping so expensive in the Ordovician sky?

Bungee jumping is not only a game for the brave, its thrilling degree is also proportional to the thickness of the wallet. The domestic bungee jumping project with a relatively high degree of scary, the price of one jump is not low, just like the emerging paragliders, power wings, etc. in the past two years. , has become an exclusive game for “Krypton Gold Players”.

However, the recently launched sky bungee jumping in Chongqing Ordovician has rewritten this phenomenon – more exciting jumping methods and more introverted prices, making the top-level thrilling bungee jumping an affordable project for everyone.

People always dream of being able to spread their wings and fly, so in the past two years, there have been endless amusement projects that can make people “fly”. The more frightening bungee jumps are, the higher the price seems to be.

Looking at the top bungee jumping projects in China, what impresses people is the proper krypton gold game:

The height of the Baling River Bridge bungee jump is 370 meters. It is certified by the Guinness World Records and is the world‘s highest commercial bungee jump. The cost is 3,000 yuan per person.

The 300-meter bungee jump in Zhangjiajie Grand Canyon has 4 jumping points and costs 2998 yuan per person.

Such a bungee jumping project is a test of courage and wallet.

The scarcity principle is the first of the ten principles of economics. What is worse in this world is not the kryptonite, but the more exciting bungee jumping project.

Chongqing Wansheng Ordovician, which ranked second in the “Beautiful Scenic Spots in China” last year on Douyin, has been swiping the screen with many projects in the “Cliff Scenic Spot”. The recently launched sky bungee jumping in the Ordovician Scenic Spot has refreshed everyone’s perception of top-level thrills. Awareness of bungee jumping.

The Ordovician Scenic Spot is the original creator of the cliff swing, step by step Jingxin and other Internet celebrity projects, and it is also the master of cliff projects. Its 70-meter-long cantilevered glass corridor has won the Guinness World Record, and the Ordovician newly launched sky bungee jumping project. , is located on this cantilevered glass corridor, making bungee jumping a “Guinness World Records +” project. 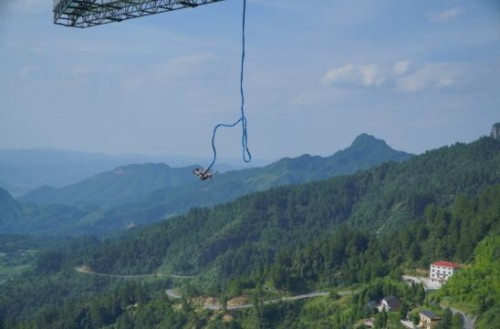 The Ordovician sky bungee jumps from the front end of the cantilevered glass corridor. The landscape in front of you is not only the rolling mountains, but also the 300-meter abyss. Taking off from this slightly shaking cantilevered glass corridor, you can feel the doubleness of the air trapeze. Exciting, after the dance, you will definitely be able to understand what is “indulgence in the world“, and what is “worth the world“.

Why did the Ordovician make the sky bungee jump project “free” to play?

It is understood that the Ordovician Scenic Spot will launch the “Extreme Rope Swing Festival” every August for three consecutive years. To the cliff, this kind of project that is even more frightening than bungee jumping, attracts brave people who like to challenge the limit to participate every year.

See also  The central bank released monthly data on personal housing loans for the first time! October, an increase of 101.3 billion yuan from the previous month, industry insiders: no news about cleaning up the backlog of mortgages_Market 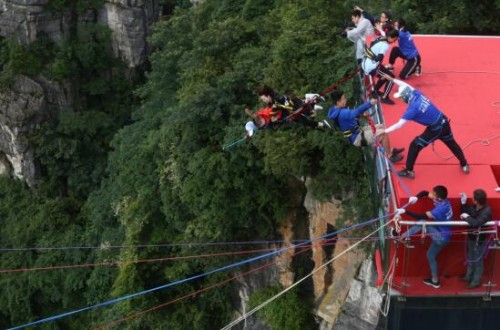 The Ordovician Scenic Spot, which can not be maintained in a normalized manner, and has always been in demand by the public, used the sky gallery to build a sky bungee jumping project. The trembling of the sky gallery and the cliffs below create a top-level thrilling experience. Bungee jumping experience, this feeling is not far from the extreme rope swing, and it can be operated normally, allowing people to play all year round, making up for the regret of not being able to “jump” on the sky gallery.

1-0 Portugal!Morata defeated Spain in 88 minutes to...