Home Sports World Swimming Championships: The Chinese team won the double gold medals in one day and worked together to “realize the dream”. The young swimmer was sealed
Sports

World Swimming Championships: The Chinese team won the double gold medals in one day and worked together to “realize the dream”. The young swimmer was sealed

Original title: The Chinese team at the World Swimming Championships won the double gold flowers in one day and went all out to “realize the dream”. 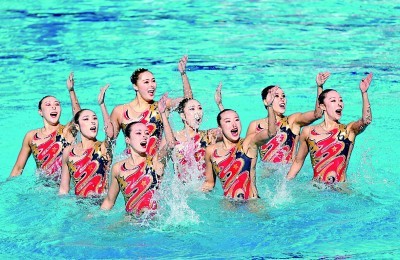 In the early morning of June 22, Beijing time, the 2022 World Swimming Championships ended the fourth final day in Budapest, the capital of Hungary. In the synchronized swimming collective technical self-selection final, the eight girls of the Chinese team jointly won the second gold medal of China Huayou in this World Swimming Championships, achieving a breakthrough in this event again; in the swimming competition, the Chinese team won the fourth gold medal Tian finally won the first gold medal. Olympic champion Yang Junxuan won the gold medal in the women’s 200m freestyle, and teammate Tang Muhan won the bronze medal.

The Chinese team ranked first in the preliminaries of the synchronized swimming collective technical optional event held two days ago. In the final, the Chinese team was the seventh to appear. The players included Feng Yu, Chang Hao, Wang Ciyue, Wang Liuyi, Wang Qianyi, Xiang Yingxuan, Xiao Yanning, Zhang Yayi. “I Love You China“, the entire set of movements of the 8 girls is perfect, showing a strong Chinese style, perfectly interpreting Chinese culture, and topping the audience in terms of quality and difficulty. In the end, the referee gave the Chinese team a high score of 94.7202, which has a clear advantage over the second and third Japanese team and the Italian team with 92.2261 and 91.0191 points.

Zhang Xiaohuan, head of the coaching team of China Huayou Team, said: “Today (winning) the collective gold medal is a historic moment. At the 2017 World Championships, we won the championship in the non-Olympic team event, but in the Olympic team event we won the championship. It has never won a gold medal. This is a historic breakthrough made by the Chinese Huayou Team in the Olympic collective event since its establishment in 1983.”

“Our opponent is ourselves. I ask the players to be themselves and do their best. Today we showed the results of hard training in the most difficult 7 months of the transition between new and old, which is worthy of the efforts of the past period. Today’s action shows the patriotic feelings of the girls, and we handed in a satisfactory answer to the motherland.” Zhang Xiaohuan said.

It is worth mentioning that in the two-person free-choice preliminaries that ended earlier on the same day, the twin sisters Kao Liuyi/Wang Qianyi ranked first with a score of 94.5667. The theme of their entire set of moves was “Green Snake”. The final of the project will be held on the evening of June 23 local time.

After China Huayou won the second gold medal at the World Swimming Championships, the Chinese team finally ushered in the gold medal moment in swimming.

The two members, Yang Junxuan and Tang Muhan, who won the gold medal in the women’s 4x200m freestyle relay for the Chinese team at the Tokyo Olympics last year, demonstrated the team advantages of Chinese athletes in the women’s 200m freestyle. In the women’s 200m freestyle final, 20-year-old Yang Junxuan and 19-year-old Tang Muhan set off in the second and eighth courses respectively. In the first half, the two young players of the Chinese team ranked low, but after the half, the two began to exert their strength. Yang Junxuan overtook all the way to the first place and maintained it to the end, while Tang Muhan chased from the bottom of the ranking to the third place.

The gold medal won by Yang Junxuan is the first gold medal won by the Chinese team in the swimming event of the World Swimming Championships. After the game, Yang Junxuan was quite modest: “In this event, some of the world‘s top players did not participate in the competition, which gave me this opportunity. I went swimming with a normal heart. Before the game, my physical condition was not very good, and by constantly adjusting and mobilizing myself It’s not easy to get such a result, it’s a very valuable experience.” She also said, “I really didn’t think about the result before the game, and I didn’t set any goals for myself. The only idea was to do technical details such as turning around. Better to improve the details that were not enough before, because the gap between the masters is mainly in the details. This time, I caught up in the second half and did a good job in speed and endurance.”

At the 14th National Games last year, her coach told reporters that Yang Junxuan is very self-disciplined and has a stable work and rest time. Unlike girls of the same age, she does not play video games and does not like to go out for shopping. Every day After training, I went straight to the rehab center after eating. Even on holidays, she either exercises alone in the swimming pool, or soaks in the rehabilitation center for treatment.

Wang Aimin, Yang Junxuan’s coach in the national team, once said: “Yang Junxuan has a relatively quiet and elegant personality, and likes writing and painting. Through writing and painting, she can calm down and think about some issues, including the improvement of skills and how to master the teachings taught by the coach. Technical essentials.”

See also  Volleyball. Alto Canavese on the roller coaster. It is now a triumphal journey

Although he has just turned 20 years old, Yang Junxuan, Zhang Yufei, Wang Shun and Xu Jiayu were called “veterans” by the media in the Chinese swimming team participating in the Budapest World Championships. For the Chinese swimming team, half of the expedition team participated in the World Championships for the first time, Yang Junxuan, who participated in the World Swimming Championships for the second time, obviously took on a greater responsibility, and she also responded to everyone’s trust in her with a gold medal. (Reporter Wang Dong)

The Epic Games Store tries to solve the problem of invalid ratings and malicious ratings, and the system randomly sends out comment invitations and imports the opinion questionnaire mechanism (178905)

Carbon dioxide that cannot be found on the...

Zoff: “Pogba is an excellent move, Juve must...

The Oltrepo greets the eternal Murriero The 40-year-old...

Heron Preston teamed up with Zellerfeld to update...

Another Kessie or a new Milan: Rossoneri at...