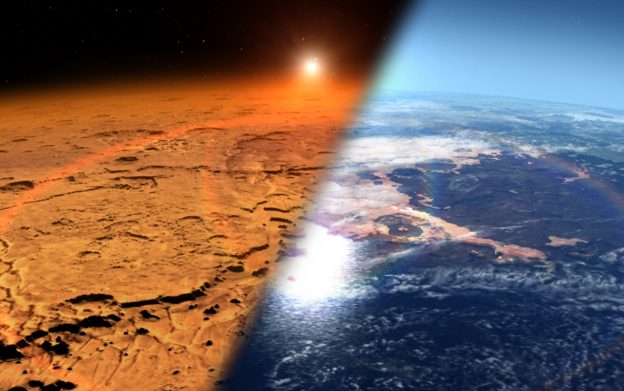 Although Mars is now a frozen desert, scientists have found evidence that Mars had lakes billions of years ago. A team of geologists from the Department of Earth Sciences at the University of Hong Kong recently published research that analyzed data from years of observation and suggested that scientists may be underestimating the number of ancient lakes.

The researchers say there are about 500 known remains of ancient lakes on Mars, but almost all of them are larger than 100 square kilometers. 70% of the Earth’s lakes are smaller than this size, especially the small lakes that occur in the cold environment of glacial retreat, it is difficult to identify from satellite telemetry, so there may be many small lakes, and it is estimated that at least 70% have not been discovered. The paper mentioned that most of the known Martian lakes can be dated back to 3.5 billion to 4 billion years ago, but each lake may have lived for only 10,000 to 100,000 years during this period, which is very short in geological history, indicating that ancient Mars may have been mostly Cold and dry climate with occasional warming for short periods of time. Because Mars’ gravity is low and the soil is full of fine particles, the lakes would be very cloudy and light might not penetrate too deep, posing a challenge to possible photosynthetic life.

▲ Martian lake, a. is a large impact crater lake, b. is a small permafrost lake. (Source: ESA/JPL/NASA/ASU/MSSS)

Lakes are the primary target of exploration by Mars rovers such as NASA’s Perseverance because they hold the water, nutrients and energy that microbes need. But not all lakes are the same. Some Martian lakes are better for microbes than others, especially large, deep, long-lived lakes, and even lakes with hydrothermal systems that are more conducive to the formation of simple life. Future exploration targets may be large, ancient, and environmentally diverse lakes. Earth has many planet-like environments, such as the harsh terrain of the Svalbard archipelago in the Arctic and the depths of Mono Lake in California, where scientists have been able to devise tools to detect the remains and remnants of life. At the end of this century, Zhurong plans to perform a sample return mission that may contain sediment from one of the interesting lakes. The research results were published in the journal “Nature Astronomy”.

(This article is reproduced with permission from the Taipei Planetarium; the source of the first image: NASA)

Cocaine and anabolics in the gym bag, hashish and a gun at home: a Treviso citizen arrested